Thank you, VikLit, for the idea to Celebrate the Small Things. It's been a good discipline. Having said that, I probably won't be able to post anything next Friday, but I shall still be celebrating.

I've had a sneaky day off today (the joys of self-employment) and been to Melton Mowbray. Yes, I know! I met my friend Jeanette, whom I studied with when we did our yoga teaching diploma. She can charging across the market square with her arms outstretched and greeting me with a massive hug. Wonderful!

Also on the yoga front, the chocolate santas and coins were well received by my students. I tiptoed round to deliver them while they were lying in the dark doing their relaxation.

I have the star letter in the current issue of Grow Your Own magazine. I've written a snippet about beating gardener's backache.

Not a bad week!

On Saturday evening, I played in the Raunds Ukulele Group. We were the 'guest artists' at the Raunds Community Choir Christmas Concert. OK, so the Britain's Got Talent judges might not have put us through to the next round, but we had such a laugh. It's just not possible to be miserable when you're playing a ukulele. This was the first time I had performed on a musical instrument since I was at school. They still talk of my glockenspiel virtuosity in the halls of Picknalls County Primary.

It seems to me there are two ways of teaching music.

My modest ukulele strumming has allowed me to find an outlet for my musical inclinations, but with no pressure to achieve greatness. We turn up on a Thursday evening, pick a song, play it, stumble over the chords, laugh and have another go. Then we pick another song and repeat the whole, glorious process.

Even on Saturday, when we were 'performing', the overriding motivation was to have fun and to share the joy of this quirky little instrument with the audience. Sure enough, as soon as we appeared, people started to smile. As we played, they joined in with the songs and tapped their feet. They clapped: hell, they even cheered!

Now, that's what I call music. 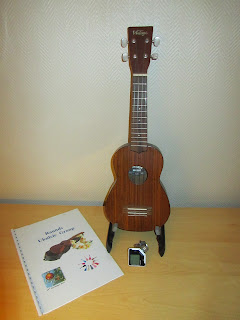 Email ThisBlogThis!Share to TwitterShare to FacebookShare to Pinterest
Labels: ukulele

Yes, it's time to Celebrate the Small Things, but this will be a quick post because I'm off out with the girls. I say 'girls'; I love a euphemism. We are off for a quiet drink in a local hostelry for a catch-up and a gossip.

But there's just time to say that I'm celebrating the end of Masterchef. I haven't watched it, but I live with someone who has, so I've absorbed the finer points by osmosis.

Last night's carol concert was lovely. We sang some Northamptonshire West Gallery Carols that had been collected by our President, Stephen Weston, which was a treat in itself. What made it even better was that Stephen accompanied us on his ophicleide, which is an ancient serpent-shaped keyed brass instrument that produces the most extraordinary noise notes.

In conversation over wine and mince pies after the performance, the question of alcohol in churches came up. Apparently any church that uses wine during communion needs a licence to serve alcohol. Communion wine must be at least 9% proof on health and safety grounds, to kill germs, while the natural antibacterial properties of the silver chalice also have their part to play. That is why if you go to a church where fruit juice, rather than wine, is used, communicants each have their own tiny cup to reduce the risk of bugs circulating among the congregation.

ooOoo
In other news, I have just watched with amusement while the young man behind the glass in the Post Office struggled to work out how to sell me 40 second-class stamps when they come in books of 12.

After the trauma of the Winter Concert on Saturday, it was with great relief that on Sunday afternoon I settled on to my yoga mat for a Christmas Chill-out with the lovely Harshani. We stretched, we chanted, we breathed, we relaxed: it was bliss.

Have a great weekend, folks - and wrap up warm!

Last night, my choir’s winter concert began with a performance of excerpts from Bach’s Christmas Oratorio. It started so well. As the last notes of ‘Christians Be Joyful’ faded away, the tenor took his place on the platform and launched into the recitative: ‘Now it came to pass in those days.’

But something was amiss. When the piece came to an end, the organist lifted his hands from the keys, but the sound kept going. Something was clearly stuck somewhere, because the church was filled with a dismal groan – and not from the audience. Like the drone of bagpipes, one valve or tube or some such was resolutely open and its mournful A-flat would not be silenced. The decision was made to switch off the organ and go with piano accompaniment instead. As the air wheezed out of the mighty instrument, the tenacious note finally breathed its last.

Down on the floor of the church, there was a brief commotion while the piano was wheeled into place and the stool adjusted to the correct height – at which point it was discovered that the piano lid was locked. Clearly, someone had to be summoned. As luck would have it, the Keeper of the Keys was in the audience. He produced a huge bundle from his pocket, but none was the right one. Further investigation in the vestry was needed. He disappeared.

Meanwhile, our valiant Musical Director chatted amiably with the audience, congratulating our accompanist on his versatility.

The keyholder returned and this time was able to unlock the piano. The concert resumed, but never has a choir been so glad to reach the interval. Punch and mince pies were dispensed to all and the mood was jovial.

The second half went surprisingly well. It included a couple of world premieres of pieces composed specially for us: a lyrical setting of the Magnificat and an intricate Benedictus. Both composers were in the church – well, one of them was in our tenor section, actually – which was lovely. The new music went down well. Then we rounded off proceedings with Haydn’s Nelson Mass, which has a Latin title that is generally translated as ‘music for troubled times’, appropriately enough. 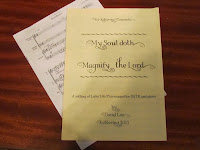 As the audience left at the end of the concert, I heard one woman say, ‘They did well, considering how challenging the programme was.’ Damning with faint praise.