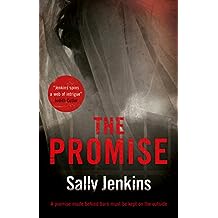 Today, I'm inviting you to pop over to Sally Jenkins' blog here. She very kindly asked me to be a guest there, so I've written a little something about reading your words aloud. (You might recall that she was a guest here a couple of weeks ago.)

As always, we both welcome your comments.
Posted by Julia Thorley at 12:20 No comments:

I have greeted today with a sense of relief that for the first time in ages I have a normal week in prospect: that is, while I have the usual mix of writing, editing, yoga and dancing about ahead of me, there's nothing happening that doesn't happen every week - no book launches, no birthdays, no trips planned and no visitors expected. Of course, this is subject to change, but it looks as though I have no excuse but to crack on and do lots of work. I might even get some original writing done!

The weather has conspired to help me in this. It is one of those misty-murky mornings that is perfect for a Monday, and especially the Monday after half term. It's mild, so I shan't need the heating on and I'll be able to go for a bit of a walk at lunchtime to clear my head, but I shan't be tempted to switch off my computer and run away to the seaside for the day.

Remind me I said all this on Friday when I look back at what I actually achieved this week.
Posted by Julia Thorley at 08:28 5 comments:

Stepping out of my comfort zone 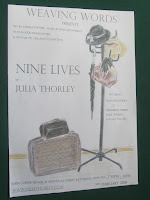 The past workaday week was enlivened by a couple of unusual happenings.

On Thursday, I spent the whole day teaching yoga to Year 12 students at a local senior school. This was a real privilege, but I was shattered by the end of the day. No wonder full-time school teachers always have their eyes fixed on the next holiday! You can read about it on my yoga blog here.

Before that, though, on Wednesday evening I had a book launch for Nine Lives as part of a Weaving Words presents event. This is a new happening, organised by my friend and guide Kezzabelle (Weaving Words is her writing community, of which I am part).

To say I was nervous is an understatement, but once I got going I was fine. The event was held in the upstairs room of the Eden Cafe here in Kettering. We dressed the set, as it were, to look like my book cover, which was Kez's idea and made a real difference, transforming an already lovely room into a proper performance space. Our friend Ros played a couple of songs to get us in the mood and then off we went. I read three of my monologues, and two more out of my book were read by other people. There were poetry readings and there was art for sale.

I sold a few books and made some new friends, so I'm counting it as a successful evening. Most important, though, I learnt lessons about what works and what doesn't, and what areas of my performance I need to work on.

The only down side was the dent my ego took when I saw the photos! Inside - and I'm sure I'm not alone in this delusion - I'm 17 and gorgeous. The reality is that I'm old and jowly. Perhaps I should follow singer Sia's example and wear a long wig over my face.
Posted by Julia Thorley at 13:16 12 comments: 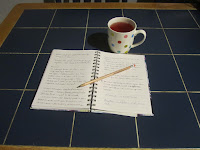 If you're looking for a legitimate way to put off the moment when you have to sit down and actually write something, might I suggest you take a look at the You Tube channel called 'Just Write'? It's full of fascinating material and the videos aren't too long, so you can watch one while you have a tea break without feeling guilty.


The channel's creator Sage Hyden offers this description of the content:

I’m obsessed with the question “How does someone become a great artist?” Many of my videos cover the fundamentals of storytelling, but they're not all about technique. Becoming a writer is so much more than learning how to write plot twists, so I want to encourage us to adopt a kind of "creative mindset" that will lead both of us toward artistic fulfillment. For me, that means being observational, critical, and self-reflective. It means engaging with the world as much as possible.

Definitely worth a look.
Posted by Julia Thorley at 17:51 12 comments:

'What if?' Guest post by Sally Jenkins, author of 'The Promise'


I am delighted to host a visit from author Sally Jenkins, whose latest book The Promise is now on sale.

"Olivia is feeling good. At 50, she’s a successful career woman and about to marry for the second time. Her fiancé Mark and his teenage daughter both adore her and the wedding plans are well underway. Then Olivia starts having nightmares about an event from her teens. They are terrible dreams that she can’t discuss with Mark. Finally, she is stalked and blackmailed. Olivia stands to lose everything, including her future husband – all because of something that happened three decades earlier."

The paragraph above is the plot of my newly published psychological thriller, The Promise, and the result of much ‘What if?’ brainstorming on my part. ‘What if?’ is the magic, ideas-generating question for writers. Most of us have that question constantly buzzing in our brains. Sitting in a restaurant I see a couple holding hands and immediately I think, ‘What if they’re having an affair and the husband walks in now?’ There’s turbulence on a flight and I wonder, ‘What if the pilot declares an emergency? How will each of these passengers react?’

Stephen King got the idea for Misery by going off at a ‘What if?’ tangent. He’d read a short story by Evelyn Waugh about a tribal chief who took a man prisoner and forced him to read Dickens aloud.  King started thinking, ‘What if Dickens himself had been taken prisoner?’ From there, a few more ‘What ifs’ took him to the plot of Misery, in which a writer is taken prisoner by his most ardent fan.

Similarly, George Orwell had a ‘What if?’ moment when he saw a little boy whip a horse. He said, 'It struck me that if only such animals became aware of their strength, we should have no power over them and that men exploit animals in much the same way as the rich exploit the workers.' Animal Farm was the eventual result of that ‘What if?’

All authors have pet subjects and themes that their ‘What Ifs’ return them to again and again. Mine is the impact of our past actions on our present lives. These may be our own actions or those of others close to us. For example, in my first psychological thriller, BedsitThree, the actions of Ignatius can be traced back to his overbearing mother and her treatment of him. For my current work in progress I started with the thought, ‘What if a man wants revenge for something that happened when he was in the sixth form at school?’ And plotting for The Promise started with, ‘What if someone knows the truth about something that happened in your youth?’

Look around next time you’re in a café or other public place. If you see someone with a glazed look, it’s probably a writer having a ‘What if?’ moment – and maybe the birth of a bestseller! SJ

The Promise is available as an ebook and in paperback from all major online retailers and high street bookshops.Sally Jenkins writes psychological thrillers and commercial women’s fiction. She lives with her husband in Sutton Coldfield and has two grown-up daughters. Find out more about Sally and follow her blog at https://sally-jenkins.com/ or follow her on Facebook, Twitter @sallyjenkinsuk or on Amazon.

About The Promise
A man has been stabbed. A woman is bloodstained. The nightmares from her teenage years have begun again for Olivia Field just as she is preparing to marry. Ex-convict, Tina is terminally ill. Before she dies, the care of her younger, psychologically unwell brother, Wayne must be ensured. So Tina calls in a promise made to her thirty years ago in a prison cell. A promise that was written down and placed with crucial evidence illustrating a miscarriage of justice in a murder case. Tina believes Olivia is perfectly placed to provide the care Wayne needs, but to do so, Olivia must be forced to cancel her own wedding and wreck the lives of those close to her. Tina's terrible blackmail demands put Olivia's entire future and, ultimately, her freedom under threat. The Promise is a fast-paced psychological thriller told from several third person viewpoints. The novel explores the lengths to which people are prepared go in order to protect those they love and the impossibility of ever fully escaping our past actions.
Posted by Julia Thorley at 10:16 10 comments: