I've tried, I really have tried very hard, to like the TV series Blandings, based on the stories of P G Wodehouse. But - and I can't believe I'm writing this - I'm finding them a bit, well, dull. I know that this will be taken as heresy in some quarters, and I'm sorry, but I just don't get it. I don't think they're funny. I can't be doing with all the girning and the daft names and the silly voices. I've watched three episodes, but have found each of them intensely irritating.

On the other hand, Father Brown, tucked away in the early afternoon slot, has been a delight. Yes, the plots are absurd and it is set in a version of England that I'm pretty certain never existed, but I've really enjoyed them. I've timeshifted courtesy of the i-player and slotted them into the evening, where they have restored me like a warm bath.

Both shows feature the excellent Mark Williams. Does anyone else remember him from the old TV ad employing his brummie accent to great effect, saying: 'We want to be together'?
Posted by Julia Thorley at 13:56 2 comments:

It really is Friday

Having failed to post on time last Friday, here is this week's celebration of something small. I have successfully completed the first section of my British Wheel of Yoga Anatomy & Physiology course. Having seen off the nervous system, I am now moving on to the skeleton. 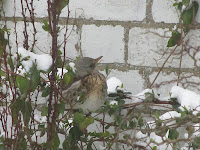 On other matters, I had a bird in the garden the other day that I didn't recognise. It was about the size of a blackbird, but with a pale tummy, yellow bib, yellow beak and white undersides to its wings. Anybody know what it is? 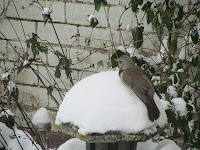 And finally, I've just listened to last night's Front Row. Sometimes this programme is a bit 'Pretentious, moi?' for my taste, but it was really interesting yesterday. There was an interview with Alexei Sayle (not one of my favourites - he was once at the next table to me in a restaurant in Milton Keynes and was, shall we say, a demanding customer); but also a chat with Vanessa Mae, the violinist. She is taking a year out to try and get into the Thai Olympic skiing squad. How inspiring is that!
Posted by Julia Thorley at 10:19 17 comments:

There has been talk of chickens in our house this week. The dearly beloved has got it in to his head that it would be nice to have a few bantams at the bottom of the garden for a ready supply of wholesome eggs. Nice idea, I agreed, but before we rush out and spend £400 on a henhouse, I suggested we do a little research. For instance, did you know that you might need planning permission to put a chicken coop up in your garden? And that contrary to popular belief it is actually against the law to feed your birds on kitchen scraps?

It turns out it is not the cheap route to rural idyll that we – by which I mean he – anticipated. Once you’ve bought your house, there’s extra wire to create a run, the ongoing costs of buying chicken feed – which it turns out doesn’t cost chicken-feed – and then you need somewhere pest proof to store it. There are also supplements, worming preparations: the list goes on. And has he considered what he would do if he found a dead bird, or worse still, a headless one? It could happen; indeed, I’d go so far as to say it’s bound to.
The idea was mooted of putting some chooks (as we poultry farmers refer to them) up at our allotment. But someone has to tend to the birds twice a day, everyday, regardless of the weather, what’s on the telly or, importantly for us, what shift work is being done. I’m happy to support this enterprise, but my husband sometimes starts work at 6 in the morning and finishes at 10 at night, so I foresee some logistical difficulties.
Then there’s the tricky problem of the rats. I’m not one of those soppy girls who runs a mile at the sight of a mouse, and my spider removal strategies are legendary. But rats (shudder), no thanks.
I suggested that the best thing would be to chat with a friend who is an experienced chicken-keeper. She was happy to oblige and arranged a visit so we could have a proper hands-on look at the job. It was at this point that my husband started coming up with excuses of his own as to why it wasn’t perhaps for us – meaning him – after all: ‘It’s a huge commitment, and I’m not sure we can justify the expense. Do we really eat that many eggs? And could we bear to send them off to be, you know, despatched, when the time came?’
I gave him a long, hard look: ‘You’re scared to pick them up.’ He didn’t reply.
But we have decided that, for now, we will buy our eggs from the local farm shop and let someone do the rearing for us.
Posted by Julia Thorley at 17:37 3 comments:

Email ThisBlogThis!Share to TwitterShare to FacebookShare to Pinterest
Labels: chickens

I am indebted to my blogger friend Helen on 'Blog About Writing' for her tips regarding some free-to-enter writing competitions.

Here's another that I've come across in Writing Magazine, Feb issue, with a first prize of £300 and second and third prizes of £100 and £50. Stories should be 1,500-3,000 words long and on the subject of bingo. Details here. Closing date is 28 February. Let me know if you win!

Posted by Julia Thorley at 12:08 No comments:

OK, it's actually Saturday, but hey. I was too snowbound yesterday to do anything literary. I taught a yoga class in a nearby village, but while we were inside someone tipped a load of snow on the roads and it took me 40 minutes to go three miles. When I got to the foot of our hill, I abandoned my car and finished the journey on foot.

But I can still Celebrate The Small Things. This week I won an umbrella. My letter to LandLove magazine will be in the next issue out at the beginning of February.

And I have a story in the Onward Writing Anthology 2012, of which I received a copy this week.

Who's in your head?

I've signed up to do an online programme with Yoga Journal, called Boost Your Willpower. In week one, our focus is on turning inside and listening to the inner voice 'to figure out what you really want in life'. Each day has a short physical sequence and then a breathing/meditation practice. I've done YJ programmes before, and they're very good (if you don't get distracted by the American accent pronouncing 'inhale' and 'in-haul').

When we got to the bit in the contemplation where I was to ask myself what I would like in my life, if all things were possible, my first thought was that I needed more cupboards so I could tidy my house. I could interpret this as a deep-seated desire for more space and lightness and a willingness to practise more detachment. However, it's more likely that I just want more cupboards.

The path to enlightenment is long and winding.
Posted by Julia Thorley at 10:56 No comments:

I've just joined my first bloghop via my blogging friend behind 'Scribblings of an Aspiring Author'. The idea is that every Friday we share something we have achieved that week. Why not join us? It doesn't have to be anything earth-shattering ('Brought about world peace') and can be writing/reading related or otherwise. 'Cleaned out the spare room' is just as valid as 'Read War & Peace'.

You can find out more here.

Please spread the word.
Posted by Julia Thorley at 11:08 2 comments:

Very grumpy because I've just had a phone call from Northants Adult Learning to say that the six-week course I was due to start this Saturday has been cancelled because 'something has come up and the tutor can't make it after all'. They are going to refund my money, but they've had my £86 (and presumably that of others) since July. That's a nice lot of interest for them, I'm thinking. Don't suppose they'll be paying me my share. This isn't the first time I've tried to do a course and they've canccelled it at short notice. Don't think I'll bother again. Grumble over.

I have been sent details of a new spiritual book club that is being set up in my area. Would I like to join? Well, yes, I rather think I would. The invitation came via my yoga website, from which I'm inferring an open-minded approach and, I'm hoping, broad discussions on matters of the spirit, soul, whatever you call it, rather than a purely religious perspective. I'm intrigued and want to know more.

So what books do you think we should include? Perhaps:
Some food for thought there.

Posted by Julia Thorley at 12:16 No comments:

Read all about it!

The Northants Telegraph was praised, if that's the right word, at the end of the year for its headline 'Man's shoes stolen during Corby robbery'. Today, the Harborough Mail has a couple of even more exciting stories:

'Flood cleared by man with stick'

I've been writing my column for the March issue of OM magazine. This means I've been trying to think about spring and not New Year or the fact that it's raining and already dark, even though it's barely four o'clock. I've tried to be lyrical, but it's hard when you can't feel your toes.

The lovely Christmas break gave me plenty of time for reading and (thinking about) writing. I've got quite a few ideas for articles and stories; all I've got to do is place them, of course! I'm also toying with the idea of checking out Gumtree in case there are any opportunities there. Anybody any experience of this?

My yoga classes don't start until next Monday so I'm also trying to get ahead with my lesson planning - and there's talk of running an all-day yoga workshop with a fellow teacher some time soon. That should be fun, as well as challenging.

It's already nearly the weekend (I love short working weeks) and I'm looking forward to seeing The Divisional play on Friday night (with my son on drums), and then on Saturday I'm off for a bit of Stripping The Willow at a barn dance. Plenty of comic potential in the latter, I'm thinking.

Posted by Julia Thorley at 17:04 No comments: