Is that the time?

I shouldn't really by taking time out to post today because I'm very busy. The much anticipated proofreading job has arrived and needs attending to NOW, if not sooner. However, I'm going a bit cross-eyed, so I thought I'd have a short break from wielding my red pen.

I've had an unusually high number of visitors to my blog today, which I suspect might be because I have an article in the new issue of Freelance Market News. If you're one of my new callers, welcome! I had three new ladies turn up at yoga yesterday, too. I'm always very impressed when someone takes on something new at this time of year, when most of us are winding down - or wishing we could. January and September are usually my busiest months, when people are either putting New Year resolutions into action or are filling their free time when the school term starts.

It's very useful having two strands to my working life, because when one is a bit slow I can put more energy into the other. I was going to say 'two strings to my bow', but that's a cliche (forgive the lack of accent). I once worked with a man who liked to say he had to bows to his arrow. Mind you, he was also fond of pushing the green light.

Finally, for no other reason than that it's is so gloomy outside, here is a photo of a blue sky on a summer's day.

It's been a long week, so my first celebration is that I've made it to Friday. I was all geared up to receive two chunky proofreading jobs on Monday. One has arrived in dribs and drabs; the other was rescheduled to arrive today. Now I've been told it will be with me on Monday, or possibly Tuesday, or probably Wednesday. This is OK in itself, but it makes it difficult to know what to do in the meantime: shall I start something else or do a little gentle dusting instead?

Second celebration is that I did manage to knuckle down and get a story written and submitted to a competition. Thanks to my writing buddy Elaine for her gentle advice. 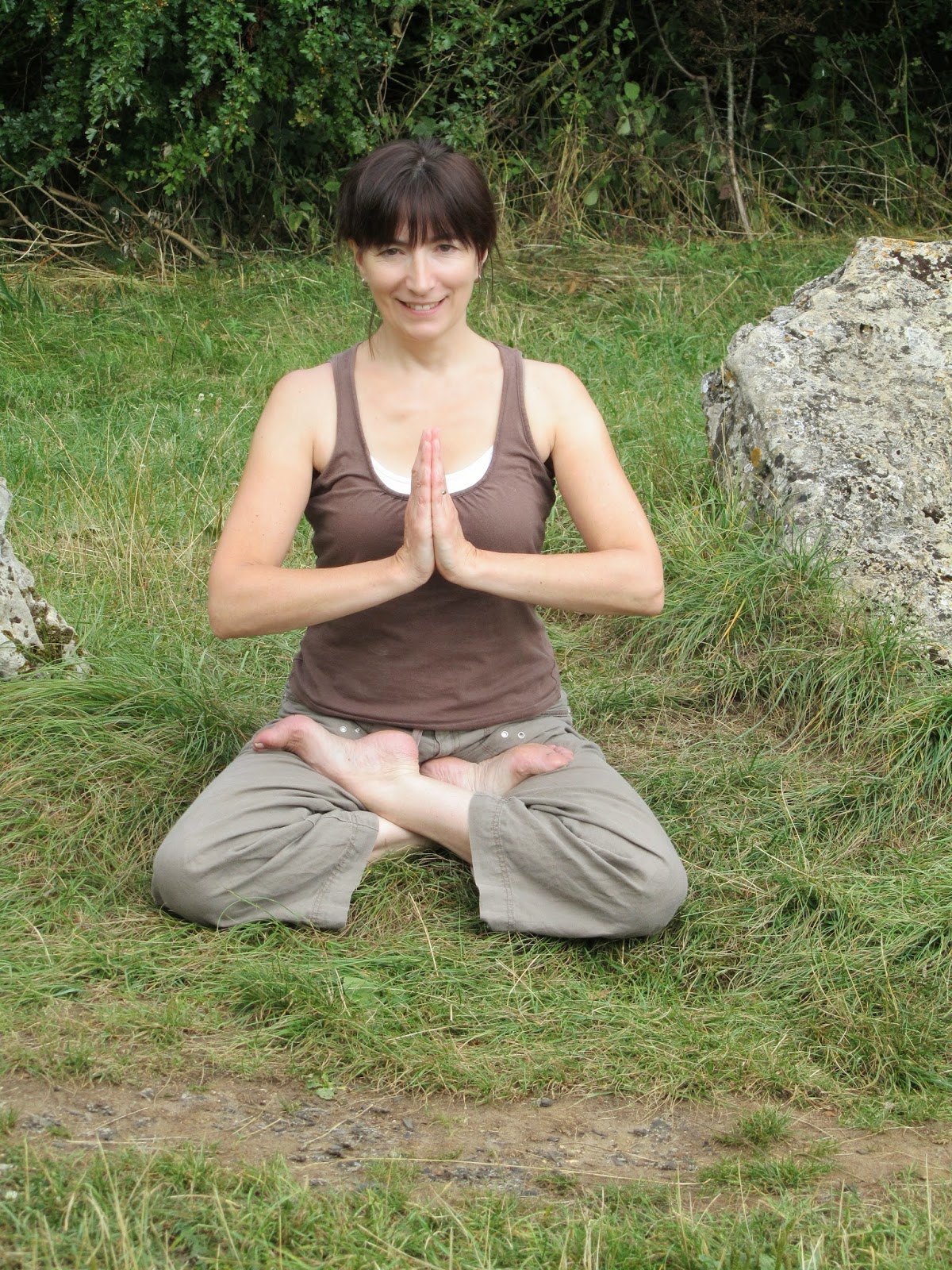 Third, on Sunday I'm off with a couple of yoga friends to an afternoon of kundalini and kirtan (that's yoga and chanting). Really looking forward to it, not least because the woman leading the session likes to begin by passing round chocolate!

'Celebrate the small things' is a bloghop instigated by VikLit on her blog Scribblings of an Aspiring Author and co-hosted by Diana Wilder, LG Keltner @ Writing Off the Edge, Cyborg Mom (Katie) and CaffeMaggieato @ mscoffeehouse. Details are here.
Posted by Julia Thorley at 17:38 8 comments:

Where did the week go?

Can it really be time to Celebrate the Small Things again? I had such plans for this week and haven't achieved as much as I was hoping to. I blame the weather; I don't like this dreary stuff.

To business:
Went to the Royal Theatre in Northampton on Monday to see The Woman in Black. I've seen the film, but this was quite different. I've had to put the book on my Christmas list, so that I can compare and contrast.

I've managed to write and submit an article in which an editor had expressed an interest. It was one of those jobs where I spent far too much time researching because it was just so damn fascinating. Don't you just love the internet?

I'm playing with my ukulele group tonight at a fundraiser in a village nearby. We're promised refreshments! 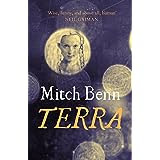 Following on from Stuart Maconie last weekend (another signed book for the collection), I'm sticking with the radio presenter theme tomorrow as I'm going to see Mitch Benn, which I'm really looking forward to. I've just read his novel Terra, which is lovely.

'Celebrate the small things' is a bloghop instigated by VikLit on her blog Scribblings of an Aspiring Author and co-hosted by Diana Wilder, LG Keltner @ Writing Off the Edge, Cyborg Mom (Katie) and CaffeMaggieato @ mscoffeehouse. Details are here.
Posted by Julia Thorley at 16:33 17 comments:

I've been reliving some former glories from my childhood. I have a cardboard box full of certificates for various achievements, some of which date back to my primary school days: such marvels as the two-widths splash race, and then later 'proper' swimming and life-saving skills; school sports day; Cycling Proficiency Test (I have two of these!); St Johns Ambulance Brigade awards for first aid, hygienic food handling and, unbelievably, home nursing; there's dancing, gymnastics and athletics; Save The Children fundraising; and piano playing. There are some useful ones, too, such as my degree and other professional and academic qualifications.

Why did I keep them? I suppose I was proud of myself at the time. Why do I continue to keep them? No idea - but I can't bring myself to throw them away.

Today, as we have the first properly cold day of the season, I'm celebrating the wonders of central heating. I know that come the day when we run out of fossil fuels, those of you with wood-burning stoves will be laughing, but for now I love being able to press a button and have instant heat.

I'm also celebrating the receipt of a gift voucher from Amateur Gardening, which has published my letter in the latest issue. It relates to a wintry topic, but I submitted it back in May with a photo. Seems that planning ahead has paid off.

As if that wasn't enough, I've had an Amazon voucher from Creative Frontiers for my winning entry in stage three of its accumulator story. If you want to have a go at writing the concluding episode of the adventure, you have until 31st December and you don't have to have entered any of the previous stages to be eligible. More details here.

I'm meeting up with some friends tomorrow for a Come & Sing event. We're doing Captain Noah and his Floating Boat. Seems appropriate, given the weather.

'Celebrate the small things' is a bloghop instigated by VikLit on her blog Scribblings of an Aspiring Author and co-hosted by Diana Wilder, LG Keltner @ Writing Off the Edge, Cyborg Mom (Katie) and CaffeMaggieato @ mscoffeehouse. Details are here.
Posted by Julia Thorley at 17:28 7 comments: 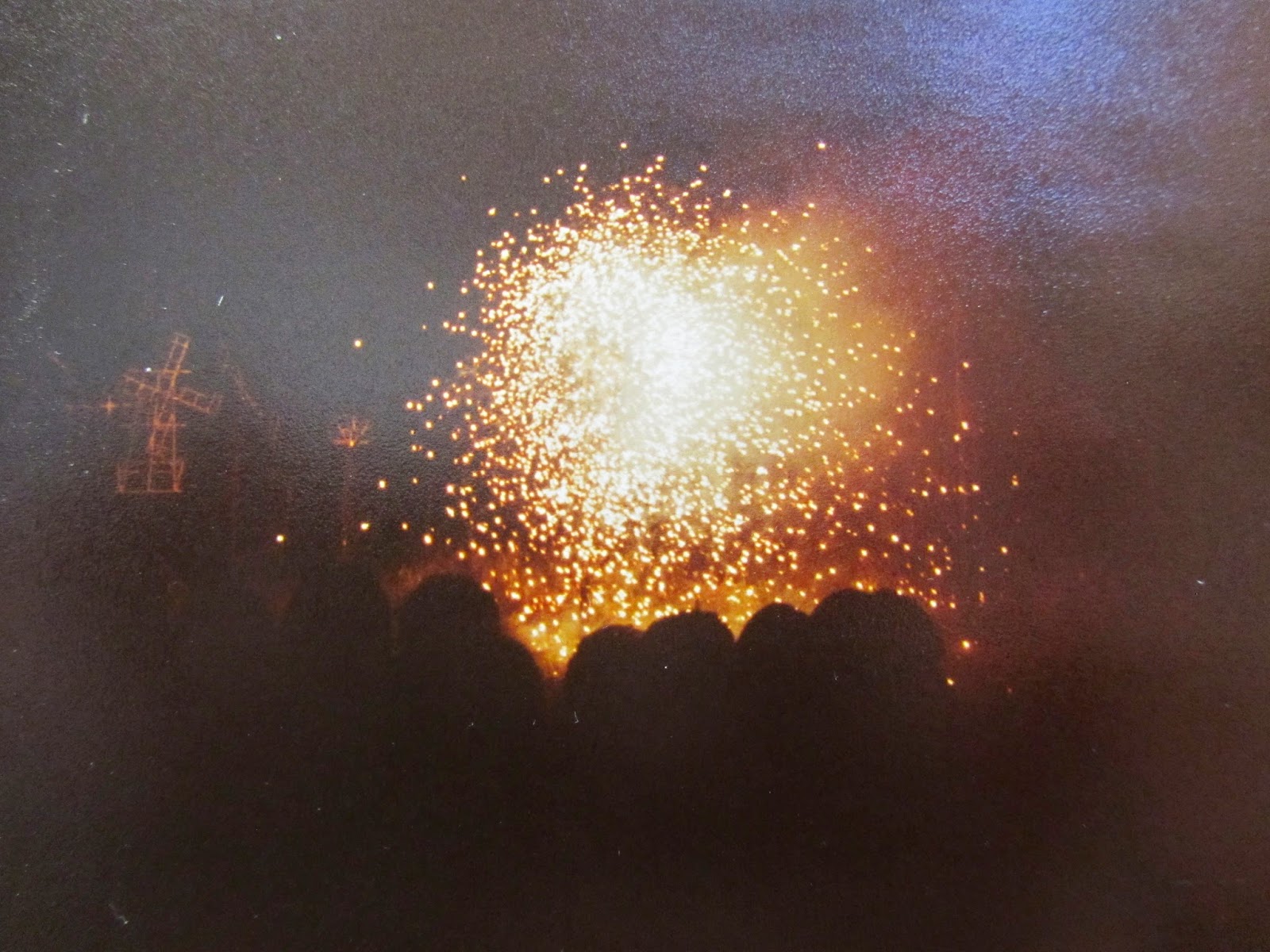 The transition of King James VI of Scotland to James I of England was not a happy one. He was unpopular with many English Catholics who felt that his laws were designed to control their rights. He needed some publicity that would show him in a better light or at least win him some sympathy. Step forward Guy Fawkes and his fellow Gunpowder Plot conspirators.
Fawkes was born in York in 1570. He was raised as a Protestant, but when he was 10 years old his stepfather persuaded him to convert and he became a zealous Catholic. In 1593, he joined the Catholic Spanish army to fight against the Protestant Dutch republic, and served until 1604. Then, at the invitation of Catholic gent Robert Catesby, he was smuggled back to England to unite in a conspiracy, with Ambrose Rookwood, Everard Digby and Francis Tresham. Fawkes joined the plotters because he considered the king to be a heretic. As he put it: ‘Desperate diseases require desperate remedies.’
The plan was to destroy the king and his parliament by setting explosives under the Palace of Westminster during the opening of parliament on 5th November 1606. Fawkes was very skilful with explosives, so his role was to acquire and set the gunpowder and then detonate the blast.
Yet as it turned out, the king was never in any danger. Tresham and others, uneasy at the prospect of their friends being killed, betrayed their fellow plotters. It seems that the authorities decided to let the plan go ahead to catch them in the act of treason. Twelve hours before the king was due in parliament, soldiers, forewarned, searched the cellars and came across 36 barrels of gunpowder, with Fawkes in the act of laying the explosive. They arrested him.
Fawkes was unaware that he had been betrayed. Despite horrific torture on the rack, it was two days before he revealed his name and several more days before he gave up details of the plot and the names of the others involved, not knowing that they had already been identified and arrested or killed.
Fawkes was sentenced to the traditional traitor’s death, namely to be hanged, drawn and quartered. However, when he stood on the gallows he jumped, thus breaking his neck and saving him from the agonies of being cut down and eviscerated while still alive. Even so, his body was cut up and sent to the four corners of the kingdom as a warning to others.
Far from removing a troublesome Protestant king, Fawkes was unwittingly part of a scheme that saw James I’s position strengthened, while fear and hatred of the Catholics increased. Some sources even say the king respected Fawkes as a man of ‘Roman resolution’.
Fawkes was neither the instigator nor the leader of the Gunpowder Plot, but his story caught the public imagination and his name remains synonymous with the event. It hardly seems fair. Catesby, the actual leader, was killed while trying to evade capture.
Posted by Julia Thorley at 09:14 4 comments:

One for the girls?

When I was at primary school, every so often we had the opportunity to choose a book to order from a leaflet that we took home and studied carefully, comparing ideas with friends to make sure that what we chose was not too 'out there'. Slim chance of anything too radical back in those days, as demonstrated by my choice of The Zebra Book of Facts for Girls. (I rediscovered this book during last month's sort-out.) 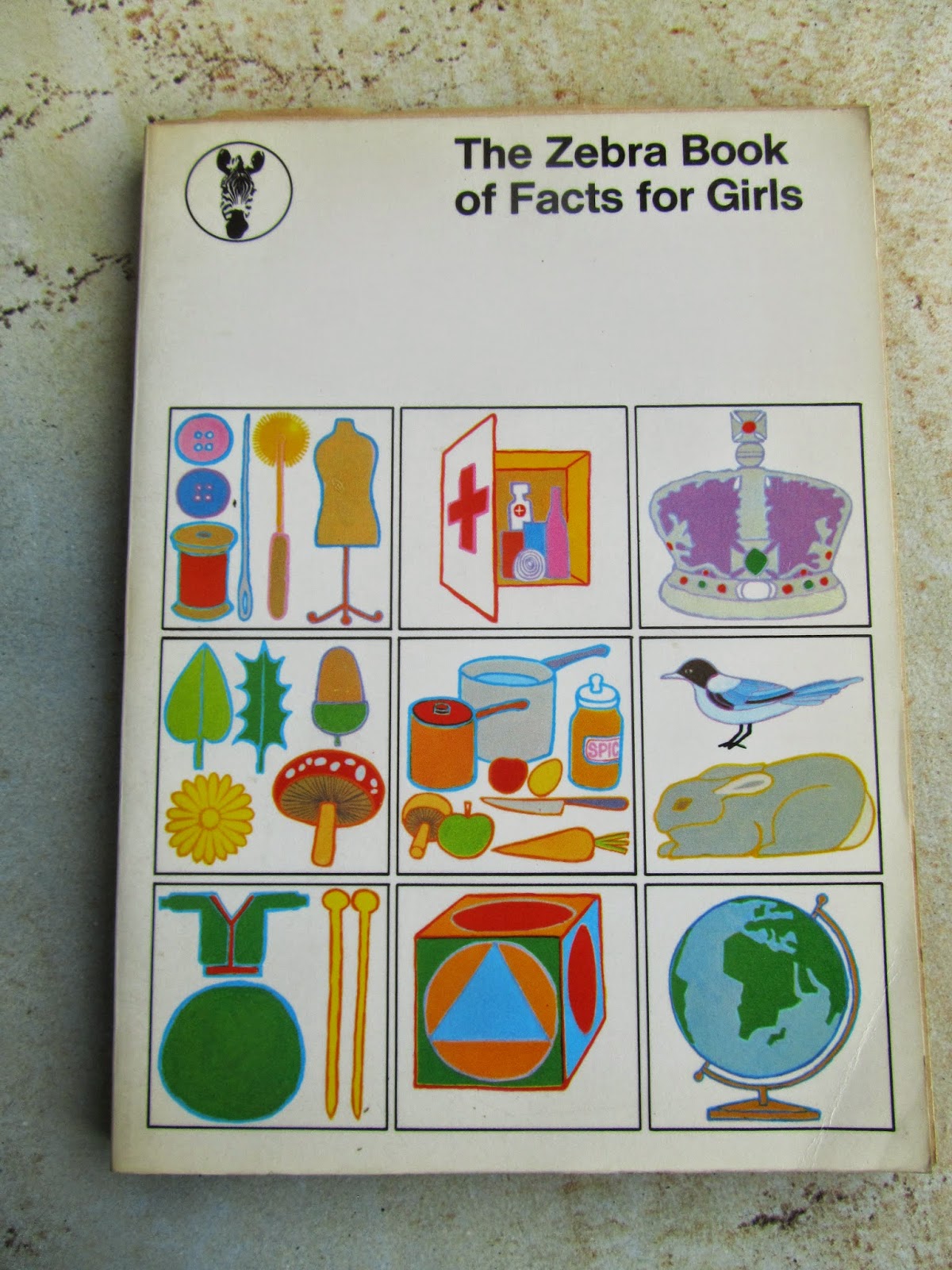 Actually, much of its content is non-gender-specific: statistics about the Commonwealth; geographical and political details about the UK; world history and geography; science and maths; and sporting records - though it is here the cracks start to show, as only female events are listed, and expressed formally, as in 'Mrs L W King' (that's Billy-Jean King).

From the chapter 'In The Home', we get these gems:

What would you do if your mother were taken ill and had to spend a few days in bed or had to go into hospital for treatment? Would you be able to look after the rest of the family?

Why not try some of the recipes on the following pages next time your mother is not too busy in the kitchen?

There was an equivalent Zebra Book of Facts for Boys. Of course, I have no idea what it contained - too strong for my delicate female sensibilities, I expect - but I'm imagining advice on how to fix a puncture, gut a fish and become an engineer.
Happy days!
Posted by Julia Thorley at 11:41 6 comments: