Not for the first time, I'm very glad today that I work from home. As I look out on to the street I can see my neigbours battling against the Winnie-The-Pooh weather (a blustery day - see?) and I'm SO glad I'm not on my way to the station to stand shivering on platform 4 waiting for a train to London. All I have to do is mumble my way into the room at the back of the house overlooking my garden (a heron has just flown by!) and I'm at work.

There are other advantages, too. For instance, it was very convenient that yesterday I was here to let in the washing-machine repair man without having to negotiate time off. I'll spare you the details, but at the moment I have two machines in my kitchen, neither of which is working. I'm also able to juggle my hours so that if I get a better offer during the day I can go out with a clear conscience as long as I work in the evening. My clients don't know when I've done the job; they're just know that I get it done on time.

It's particularly useful to be around during the day this week, because my son is moving out on Friday and I've been given permission to release my inner control freak and help with the logistics of packing, paperwork and general organising. I'm in my element. I just hope I can rein in my enthusiasm at the weekend and don't try to arrange his furniture in his new home.
Posted by Julia Thorley at 07:04 2 comments:

Email ThisBlogThis!Share to TwitterShare to FacebookShare to Pinterest
Labels: working from home

I'm REALLY busy this week, so I haven't got time to write another 'proper' post. Here is a picture of a comedy potato: please devise your own amusing text. 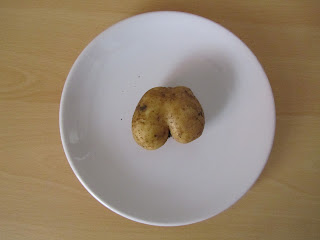 
One hot topic amongst the allotment holders in our field this summer has been what to do about those of our number who seem to have given up and whose plots, so lovingly tended at first, have run to seed. Where there should be rows of beans and sweetcorn are swathes of nettles, thistles and other nasties, just waiting for the right moment to take flight and infect our beds. It’s just not fair, but there doesn’t seem to be anything that can be done.


I remember my dad taking a flame gun to tenacious weeds in our orchard. Dangerous, possibly, but highly effective. Well, I’d like to do the same to the plot next to us, which threatens to engulf us any minute - but there are probably rules against that.

Five things I suck at

You might think that drawing up a list of things I can't do is a bad idea. The yogi in me tries to think positively and I tell my students about the benefits of positive affirmation.

But following a post on Fusion Massage + Movement blog (which in turns picked up this idea elsewhere - you can backtrack for yourself, should you so wish), I've decided it's an interesting exercise.

So, here are five things I suck at:

1. Sewing - anything that needs resources other than some strong glue or a discreet staple won't get fixed by me.
2. Travelling abroad - just can't be bothered, don't even have a passport.
3. Rock climbing - this frustrates me, because I really want to be able to do, but I get so far of the ground and then stop.


4. Wearing high heels - I simply don't have the poise.
5. Keeping my nails tidy - I don't nibble them, but they split, or I catch them on something, or they suffer from fallout at the allotment.

What a nice surpise!

This morning's post has brought me a cheque from Real People magazine in payment for a little filler piece I submitted in January. I'd forgotten I'd written it, but my filing system is so 'Monica' that I was able to look back and find what it was: an item for 'Tim's Treasure' about a moustache cup. Just goes to show you should never give up hope!

I went to a birthday bash yesterday. I'm not sure how it can be right that one of closest friends is now 60, when I am still so very young, but nevertheless that was the occasion.

Will is a railway enthusiast, so to mark his special day a coach-load of us went on a Dining Car Excursion on a vintage steam-hauled train courtesy of the Great Central Railway. The 16-mile return journey took us from Loughborough to Leicester North station and back, pausing on the bridge across picturesque Swithland Reservoir to admire the views of the Leicestershire countryside.

I'm not a steam engine buff, but it would be a hard heart that wasn't moved by the sight of one of these mighty beasts: and the smell! It makes everyone nostalgic for bygone days, whether or not they are actually old enough to remember them. It was all very Agatha Christie.

So we dined in style in a luxurious Pullman carriage. The food was cooked actually on the train, not imported in huge vats to be reheated, and it was delicious.The drink flowed, the talking never stopped and a good time was had by all. Cheers, Will!
Posted by Julia Thorley at 09:00 No comments:

I'm pretty good at making decisions. I'm not saying I necessarily make the right decision, but I'm not one of those people who agonises for weeks about every little choice and then spends just as long afterwards worrying whether or not I've done the right thing. Weigh up the pros and cons, decide, move on.
But I've been writing an article about leaving home and looking for a flat in London in the late 1970s. Long story short: I ended up in a bedsit in Crouch End, which was at the time a cheap option but is now very desirable. Across the way from where I lived was a small block of one-bedroom flats, newly renovated and on the market for £20,000. No, I haven't missed off a zero: £20,000.

Why didn't I buy one? Because I was having too much fun, spending ridiculous sums of money of records, concert tickets, taxis home from the Music Machine in Camden Town, patchouli oil and black eye-liner. I didn't want a mortgage!

But if I'd bought it, stayed 10 years and then moved to the Midlands, would I be rich now? Perhaps. But would I have married the same man? If not, does that mean that my two lovely sons would never have existed? Which lives would I have touched and which would have passed me by?

I am where I am now because of the choices I have made. But is there another 'me' somewhere who never left London, and who pursued a career in public relations and never went to a yoga class?

Too much philosophy for this early in the day. But it makes you wonder.
Posted by Julia Thorley at 10:23 No comments: