Just a quick one this week, as I'm dashing out in a mo to see the Bad Shepherds (Ade Edmondson's band), which is in itself a cause for celebration.

I'm also celebrating that Ivory Yardsale, for which band my son is the drummer, has a new EP out. You can hear the tracks via Soundcloud here. They were played on local radio on Wednesday, and there has been interest from BBC Introducing, which is very exciting.

Once upon a time, there lived an aspiring writer 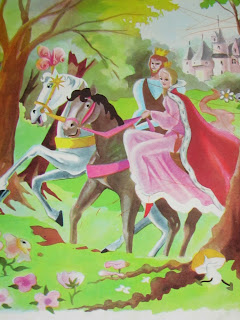 As I mentioned on Friday, I went to a workshop last week: ‘How do you climb a glass mountain? Exploring Fairy Tales Masterclass.’ It was run by the wonderful Jo Blake Cave, who gives her job title as ‘Storyteller’. Isn’t that lovely?

Sixteen of us sat round in a circle, and after some general discussion of what makes a fairy tale (not a fairy story, note, which is a story that has fairies in it), Jo told us her version of the Brothers Grimm tale ‘The Three Languages’, which I must admit I didn’t know.

Then, working in pairs, we had to retell it in our own way. I was surprised how difficult I found this. Clearly I’m not an auditory learner. Next, we had to plot the shape of the story on a graph, marking the fortunate and unfortunate events, and the threshold points that could be said to be decisive moments or turning points in the narrative.

Then we were each given four pieces of paper on which we had to write (1) a problem and a task, (2) a hero(ine), (3) a magical object and (4) a helper. These were shuffled and we were given back a different set of four unrelated elements from which to construct a story.

It was fascinating and tempted though I am to write up the entire two hours I will instead tell you that as well as the four elements above, a fairy tale needs its own internal logic, archetypal landscapes and some manifestation of the rule of three (three wishes, three bears, etc, etc).

Unfortunately, this masterclass came too late to help me write my entry for the recent WM adult fairy tale competition. Now, where’s my magic lantern?
Posted by Julia Thorley at 16:50 No comments:

Time to bloghop with VikLit and Celebrate the Small Things. It's been a good week, high on achievement workwise, but with quite a bit of socialising thrown in for good measure. On Monday I caught up with an old friend who has turned a corner with a health issue and seems to be on the way up. Tuesday's choir rehearsal went well. I think we've finally mastered the tricky Benedictus. Excellent yoga class on Wednesday evening, even though the school was cold. We worked our way towards the Turtle (kurmasana). Tricky to get into; even trickier to get out of. Have a look here. Last night I went to a Fairy Tale Writing Masterclass, which was really interesting. I'll do a more detailed post on this in due course. Today, I've had a good day, too, with lots of work done. 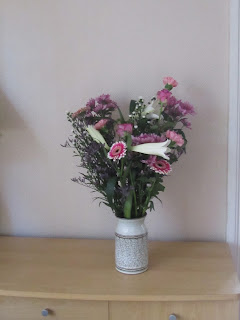 Highlight, though, has got to be yesterday morning, when the doorbell rang. There on the step was a delivery man with a huge bunch of flowers. Normally when this happens, he asks me to take them in on behalf of a neighbour. But no: they were actually for me! It crossed my mind that perhaps my husband or one of my sons had done something I had yet to find out about and was getting his apology bouquet in first. The accompanying card revealed, though, that they were from a grateful client. Isn't that nice?

Hope you all have something to celebrate.
Posted by Julia Thorley at 16:26 10 comments:

Neither offender nor offended be

Many of us are in the midst of preparing Christmas logistics. May I throw something into the mix, please?

Resolve not to be offended if your plans do not meet the expectations of your nearest and dearest (and others to whom you feel you owe festive duties). If they don't want to come to your house, that doesn't mean they don't trust your cooking or that they hate your children or your dog. It simply means they have other plans.


If folk insist on seeing you when, deep down, you'd rather they didn't, be glad that you can make them happy. It's just possible you'll miss them when they're gone.

If people take offence at what you have planned, let them. It's not your problem. You can control your own response to circumstances, but not that of others.

Follow Utilitarianism's Greatest Happiness Principle: take the course of action that brings happiness to the greatest number of people.

You must have been a beautiful baby

Our local paper this week has 28 pages devoted to pictures of new starters at school. It proudly proclaims: '67 schools - 135 pictures - 3,065 children'!

I don't know anyone who has a child who started school locally this term, but I always have a look at the pics, and I'm not ashamed to admit I'm doing this for their comedy value. OK, clap me irons, but I can't be the only one plays 'spot the class clown' and 'seek out the name most likely to cause embarrassment in later life'. There is similar sport to be had when the photos of entrants to the 'beautiful baby' competition are published. Of course, all babies are beautiful in their own way, but some are also hilarious. Have you never run your finger along the line of beaming faces and labelled them plumber, builder, lawyer, shoplifter, dealer etc, etc? No? Just me? Oh, OK.

One section of the paper I always look at is the court reports. I'm nosey: I like to see if anyone I know is in trouble; but I'm also looking for inspiration. Many of the arrests are in connection with possession of drugs or being drunk and disorderly. Occasionally, though, there is a glimpse of human tragedy where someone has taken a packet of cooked meat and a bottle of wine from Lidl. How sad is that! The Northants Telegraph comes in for a lot of stick, but I buy it every week. There's always something in it that makes me go: 'Well, fancy that!'

Blogging is a funny old game. We write these words not knowing whether anyone will read them or not, and certainly not knowing what reaction there will be. Monday's blog about giving to charity had one of the highest number of readers I've ever had, but only one comment (and that came this morning).

Of course, we don't only write to be read. I've just finished Bird By Bird by Anne Lamott (one of my birthday books - fantastic). She says we should write to become better writers, because helps us to become better readers, and that is the real payoff.

As National Short Story Week comes to an end, I have just finished reading Jeffrey Archer's collection, And Thereby Hangs A Tale. Some say he's much maligned, others that he can't write for toffee. I think some of his stories are built on interesting premises, but must confess I didn't find them all that engaging. The book was given to me by a fellow volunteer at Cheltenham. He doesn't want it back, so it seems only fitting that I pass it on. Let me know if you'd like it. (No pushing at the back!)

So I'm celebrating the joy of reading and of unexpected gifts. How about you?

To give requires good sense*

Email ThisBlogThis!Share to TwitterShare to FacebookShare to Pinterest
Labels: charity

What a difference a week makes

Friends, I'm so much happier today than I was last Friday, not withstanding that I've had to pay out £100 to get my wing mirror fixed after a bit of a prang. Still, could have been so much worse.

So let's get on with Celebrating the Small Things. 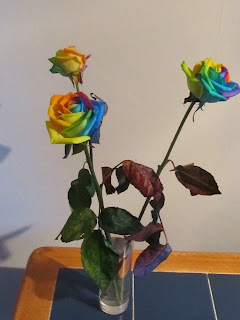 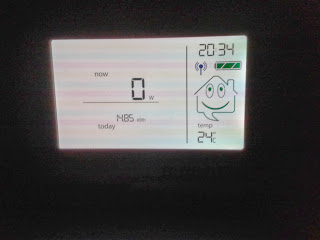 On Monday evening we had a series of mini power cuts lasting about 10 minutes each. It's at times like this you wish you'd listened to the advice to keep a torch where you can find it in the dark. However, thanks to the flashlight function on my phone I was able to fumble about and find some tea lights and a box of matches.

Somewhat ironically, the only glimmer of light in the whole house came from the ridiculous gizmo British Gas has given me to monitor my power usage. It turns out that the more things I have switched on, the more it costs me. Well, thanks, chaps, I'd never have thought of that! This gadget has a battery backup, which revealed the reassuring fact that I was using no electricity as I sat in the chilly gloom.

A lesson in self-promotion 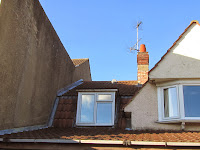 It has been raining in. Not surprising, given the weather we've been having; but what is a bit strange is that it is raining in on to a downstairs internal wall. Men have been called.

One of the roofers who came to give us a quote also has a sideline as a writer. What follows is not a recommendation of his book, which I haven't read, but rather a celebration of his gift for self-promotion.

While he was investigating the rather peculiar structure of our house, he chatted amiably about life, the universe and so on, and revealed that he has written a book. He was interested to discover that I, too, am a writer and asked about my work, as well as telling me about his latest project. But what I found really impressive is that he was able to produce from his wallet some promotional bookmarks for me to use and give out. Ten out of ten for preparation. Not only that, but he had also given my husband a couple while they were upstairs taking a manly look at the job.

It seems only fair, after all this, that I direct you to his website, here.
Posted by Julia Thorley at 14:18 3 comments:

Celebrate the small things? No, sorry, nothing to celebrate today (grump, grump). Normal service will be resumed as soon as poss.