Despite the dire warnings from the weatherman, today has been a lovely autumn day with light winds and bright sunshine - what you'd call a 'good drying day' if you were a proper housewife.

It has been an uneventful week. It's always worth acknowledging it when nothing has gone wrong! I ventured back to a dance fitness class on Monday for the first time in many, many weeks. Same teacher, but a new venue and a new style. Goodbye, Zumba: hello, SOSA! Have you come across this? It loosely means solo samba, but I'd describe it more as Zumba Lite. It's got all the lovely Latin beats, but it's low impact. To be honest, it was a bit tame, but it no doubt did me more good than sitting on the settee.

I went for a routine midlife MOT with the practice nurse this morning, where I was pleased to learn  that my BMI, waist measurement and blood pressure are spot on. I might celebrate this evening with a glass of wine, which I'm sure is beneficial to my wellbeing.

As always, I'd love it if you could leave me a comment. Have a great weekend, folks.
Posted by Julia Thorley at 15:22 6 comments:

We can't be good at everything - or can we?

Well, I've just had my second art class and can say with confidence that I can't draw roses. On the plus side, though, the teacher has put me in charge of the tea and coffee, so I shall have to go back next week.

I was immediately chastised by my artist friend Lorraine for saying can't, to which I replied that what I should have said was that I haven't managed to draw one yet. I've also had some supportive comments about hanging on in there, and I shall stick it out - it's only a five-week course - but it's a real challenge. You know that place in the distance, that place so far away you can hardly see it? Well, just beyond that is my comfort zone.

Why do I put myself through these things? Because I can, that's why. Because unless I try, I'll never know. Do think my timid eight-year-old self struggling to play 'Home Sweet Home' on the piano would have thought it possible that she'd one day play Chopin's 'Raindrop Prelude', with its five-flats key signature? Hell, no! And yet, eventually, she did - and still can.

Theodore Roosevelt said, 'It is hard to fail, but it is worse never to have tried to succeed.' I'm still not going to post a picture of my rose, though! These are Van Gogh's - but I bet he couldn't play in D-flat.

A question of art

For as long as I can remember, my mother has owned a print of a picture called 'After Marriage' by Edouard Debat Ponsan. It shows a young couple strolling down a country lane while behind them walk two cattle, yoked together. The symbolism slaps you in the face, but it is a pleasant enough image.

We have always thought there must be a companion picture and, sure enough, an internet trawl revealed that Ponsan did indeed paint another picture called, 'Before Marriage'. It would be lovely to have a copy of this picture so the pair could be displayed together.

The problem, though, is that there is none to be had, not even for ready money. There are plenty of his other prints on sale, but not the one I want, which is most frustrating. The best I've been able to do it right-click and save an image* of it, but this doesn't really suffice. 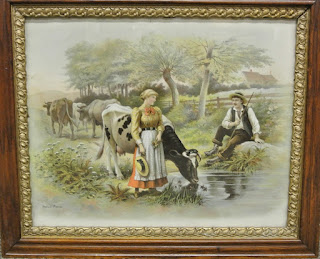 So, if you see it for sale anywhere at a rummage sale or if you happen upon it on eBay or some such, be a dear and let me know. Thank you.

*Obviously I have reproduced this image without the permission of the copyright holder. If that is you, forgive me.
Posted by Julia Thorley at 11:01 No comments:

Well, that was an odd week. I don't know how many emotions there are, but I'm pretty sure I've touched on most of them during the last seven days. However, I'm finishing the working week with the satisfaction that all my deadlines were met and I've made a decent start at catching up with my boring admin tasks.

One specific celebration is that I went to my first ever art class (that is, the first I've done since leaving school). At 'Pastels For Beginners' I was surprised to learn that the other five people enrolled were not beginners. I was a bit put out at first. Oh no! They'll all be better than me. 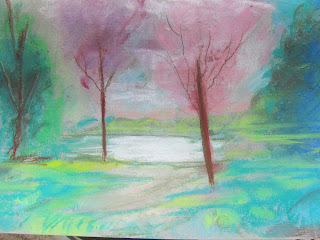 On reflection, though, I've decided this gives me an advantage, because I have low expectations and nothing to prove! I got very grubby, but it was good fun and the teacher, Gerald, was very kind to me. My first attempt is here:

Have a good weekend, folks, whatever you're up to.

If you would like to join this bloghop, send your details to laura.6eg@gmail.com  and she will do the necessary.
Posted by Julia Thorley at 15:14 2 comments:

Well, this is easy today: Happy Birthday, Mum! I shall be heading to Staffordshire for birthday tea and cake on Sunday.

I'm also celebrating the breakthrough of a friend who, after some difficult times, was able to say out loud 'I am an artist'. So proud of her.

I'm also quite proud of myself, because I've come runner-up in the Senior Travel Expert website's latest competition, and have won the Association of Freelance Writers flash fiction comp. *blushing modestly* I'm taking part in a quiz tonight - will the winning streak continue?

If you would like to join this bloghop, send your details to laura.6eg@gmail.com  and she will do the necessary.

A song in my heart 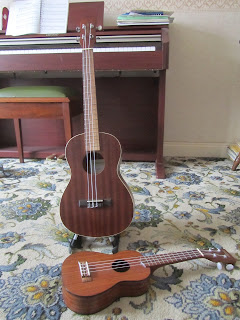 There's been a fair bit of music around recently. Last weekend I was at the Bingley Live festival, where my friend's son's band Your Illuminations were playing. Oh, and the Manic Street Preachers, Pete Doherty and the Kaiser Chiefs, among others.

I was at an accoustic music night midweek at the art gallery were I did my Pollock shoe painting recently and was delighted to see my efforts are now up on the wall. That's a first!

Saturday saw me taking part in a Strum Like A Pirate day, with the two ukulele groups I belong to. Related to that, my drummer son and I have used each other as an excuse to go halves on a baritone uke, which is very pretty, as you can see, and much bigger than my trusty soprano one, which is lying on the floor in front of it.

I have done some writing, too, honest! More of that anon.

Posted by Julia Thorley at 16:25 No comments:

Mixing with the best 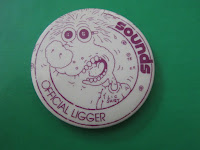 We had a particularly fine session at Weaving Words yesterday. Whether it was because we were all feeling refreshed after our summer break or were celebrating the start of a new term I couldn't say, but the ideas were flowing and the energy high.

One of the many things we discussed was the benefits of associating with other writers and artists. There's something about mixing with creative souls that brings out the best in us, so if you want to write, hang out with writers; if you want to sing, hang out with singers; if you want to paint - well, you get the idea. I'm not talking about gatecrashing preview nights or making a nuisance of yourself outside the stage door, but I'm convinced that my increased writing output over the last year is due in no small part to the connection I have made with Kezzabelle and the other Word Weavers.

I don't know if we pick up creative thoughts by osmosis or energy transfer, but I am quite sure that there is nothing like a session with writers, musicians, actors and so on to set my senses tingling and my pen twitching. It goes without saying that you must never pinch another person's ideas, but an image or a snatch of conversation can be the catalyst for something wonderful.

As always, I'd welcome your comments.
Posted by Julia Thorley at 11:01 8 comments: