Celebrate the small things with us.

The free flowers are some sweetpeas that have mysteriously appeared in my garden. Not sure if the birds brought the seeds in or whether they are remnants of some long-forgotten plants, but I'm enjoying the blooms.

Also celebrating Jane Austen being the image on the new £10 note.

And a small win for me in a flash fiction competition run by Freelance Market News.

And, finally, the appearance of a flower on our waterlily. 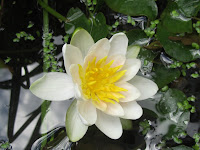 During one of the hottest weeks of the year so far, my friend has just spent two days in a sticky office a motorway drive away genning up on health and safety legislation. She has done this many times before. She is an experienced manager and knows what’s what in business. The outcome of these two days of training can be summed up thus: don’t do anything stupid; advise your colleagues not to do anything stupid; if despite this they still touch an electrical cable to see if it’s live or walk into an oven to see if it’s cool enough to clean they only have themselves to blame when they get injured.

I work for myself but I still have to keep my skills and knowledge up to date, though I can choose what courses I do and when. All that limits me is time and, of course, money. It’s amazing how much more attention I pay now that I’m funding my own training.

You might find this hard to believe, but I quite like going on courses. One thing I’ve  noticed is that whatever the subject, those attending fall into some rather neat stereotypes.

There are generally a couple of blokey-blokes who are going through the motions of the day, but actually have their eyes firmly on the expenses allowance and are keen to spend it all. They have little trouble with the course content and stay relaxed about the whole dreary business of being there.

There will be a couple who are keen to earn promotion, or, just as likely these days, doing all they can to keep their jobs. They will hang on the presenter’s every word, ask incisive questions and take copious notes even where handouts are provided. During breaks, instead of going outside for a breath of fresh air and a KitKat, they will read over what they’ve learned so far and look ahead to the next session.

Then there’s the worrier with a permanent frown, who keeps up a running commentary under her breath to ensure she processes everything thoroughly; and the sensible woman who wants to keep her head down and get through the day without upsetting anyone, but also to learn sufficient to justify her being sent there in the first place.

Most annoying of all, though, is the twerp who knows it all and wants us all to know that he knows it all, but who deploys feigned ignorance by asking lots of questions prefaced with: ‘I have heard…’ or, worse, ‘Isn’t it true to say that…?’ Makes my blood boil just to think about it.

Posted by Julia Thorley at 14:37 No comments:

Email ThisBlogThis!Share to TwitterShare to FacebookShare to Pinterest
Labels: training

Not a small thing, but celebrating big time that I'm off to see Paul Weller this evening in the grounds of Delapre Abbey. V excited.

I'm also celebrating that my lovely yoga students have been coming to classes, even though the weather is so beautiful. Namaste to them. I generally teach the same lesson to the groups on Tuesday and Wednesday because different people attend and it's interesting for me to see how the two sessions react to the same lesson plan. Because it was so warm on Tuesday, we did a rather longer meditation than we usually do, and it seemed to go well, sparking some discussion and with lots of feedback. On Wednesday, though, the response was distinctly muted. I never know how my lessons will be received - keeps me on my toes.

I spent a little while in the garden yesterday trying to take an arty-farty pic for a competition, but Nature wasn't being co-operative. Did manage a snap this frog, though. What do you think: shall I stick to writing? 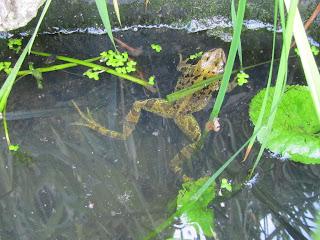 I've got another ukulele lesson tomorrow morning, then there's comedy at the Arts Centre.

Happy weekend, everyone!
Posted by Julia Thorley at 11:32 7 comments:

Harvest time at the allotment 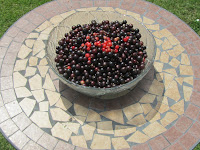 I've had a really busy few days. On Saturday, despite the searing heat, my beloved other half decided we must, absolutely must, get up to the allotment and start picking stuff before the birds, rabbits and other assorted livestock help themselves to it. He was right, of course. After a slow start, everything is flourishing.

I picked 3lb of redcurrants and blackcurrants and have turned them into jelly. We also harvested the first of the broad beans, some courgettes, potatoes, peas and garlic, which have variously been eaten, frozen or otherwise stored. Add to this the continuing crops of carrots, strawberries, rhubarb, gooseberries, herbs and lettuce at home and I'm starting to feel like Barbara Good! 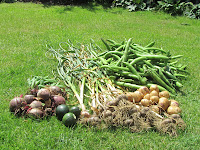 Elsewhere, I performed in the last concert of this academic year with Kettering Camerata on Sunday, which went very well - enhanced in no small part by the addition of a French accordion-player. (Well, actually he's Latvian, but he played French music in keeping with the theme of the day, so I think we got away with it - and hey, we're all  Europeans.)

I've also been really busy with work, but sadly not had time for any original writing. Must try harder.
Posted by Julia Thorley at 15:28 4 comments:

A quick one for the writers among you.


﻿
﻿
Fay Brotherhood, lead singer with the excellent Cernewoda, has put this up on her Facebook page:


“One reason that people have artist’s block is that they do not respect the law of dormancy in nature. Trees don’t produce fruit all year long, constantly. They have a point where they go dormant. And when you are in a dormant period creatively, if you can arrange your life to do the technical tasks that don’t take creativity, you are essentially preparing for the spring when it will all blossom again.” Marshall Vandruff,


Nothing wrong with a bit of dormancy.
Posted by Julia Thorley at 12:29 2 comments:

Perhaps I'm odd,but I've never wanted to be on The X Factor or similar shows, but I did want to be on Call My Bluff (too late). I'd like to be a panellist on QI (unlikely) and I have my selections ready for when I get the invitation to be on Desert Island Discs (well, you never know). I did win my heat of Fifteen To One many moons ago, but it's not quite the same as Only Connect, another show on my wish list.

I also want to express my many opinions on national radio - and maybe I'll get the chance, because the BBC has launched Pause For Thought: Radio 2’s Search For A New Voice for 2013. Details here. So if you've got something to say and can condense it into two thought-provoking minutes of recorded speech, get cracking. Closing date is 5th August.
Posted by Julia Thorley at 09:31 No comments:

Email ThisBlogThis!Share to TwitterShare to FacebookShare to Pinterest
Labels: Fifteen To One, Pause for Thought

Being grateful for small mercies

1. The goldfinches are back - see picture. I do what I can to attract the birds into our garden, including a hanger of niger seeds, but I haven't seen the goldfinches for a while. But they're back. This morning, I was sitting at my computer with the back door open when something caught my eye. I looked left to find a pigeon perched on a chair back. It's hard to say which of us was the more startled - though in the end I out-stared him and he flew back into the garden. 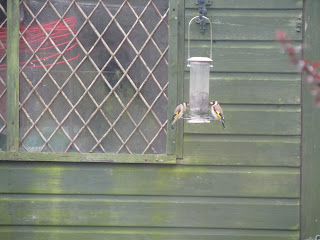 2. My friend David has heard today that he has a new job. Yeah!
3. Number One Son has survived his first week in his new job.
4. I've had some lovely feedback on one of my stories on Ether Books. Thank you.
5. I taught a nice one-to-one yoga session with a new student this afternoon.
6. I've managed to get some coverage in the local paper for my choir's forthcoming concert.
7. Tomorrow I have the first half of a two-session ukulele course. Wish me luck! 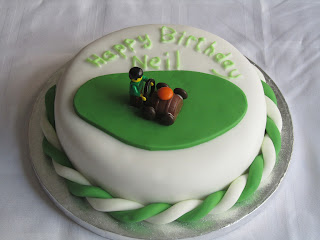 The journey home down the motorway was fine except for a minor disagreement with a couple of wazzocks in a Stanair van who took great delight in tailgating me down the A14. I'm not easily intimidated, however. Quite what physical inadequacy the driver was compensating for that he had to bully my 1.2-litre Fiesta I'll leave you to guess.
Posted by Julia Thorley at 11:21 6 comments: