It's oh so quiet

My editorial clients must have decided to extend the Bank Holiday weekend by an extra day, because my email account and phone are quiet today. This is good, because it means I've been able to spend all morning writing. I'm working on a short story, but it's taken a rather depressing turn, so I'm having a break to post here and then I shall go for a quick walk round the block to lift my spirits.

My weekend went well. I went to a poetry group meeting on Friday evening. On Saturday, I played my ukulele at the grand opening of a bandstand-cum-covered seating area in the afternoon and then in the evening went to a performance of M R James stories in our local art gallery. On Sunday, I taught my creative writing workshop as planned. All good.

Yesterday, I pottered. This included taking a saw to my lilac tree. It's still standing, but it's letting in much more light than it was this time last week.

I usually teach yoga on a Tuesday evening at a local hotel and spa, but I've just had a message to say the electricity has gone off over the whole site, so I have an unexpected night off. I could go to Zumba, or I could watch King Lear, which I recorded last night so I could watch Car Share in real time. I'm such a culture vulture.
Posted by Julia Thorley at 13:56 3 comments:

We're in the money (not) 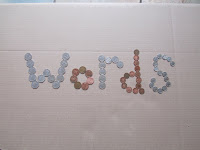 I have friends getting rich doing jobs they hate; I have other friends you live happily on next to nothing. Most of us, I suspect, are somewhere in between.

When I was at college, I worked in a cake shop every Saturday in the days when we had to add up in our heads and wrap crusty bread in tissue paper. (I am very old.) On Sundays I worked in a petrol station, which involved filling up customers' cars in the sub-zero temperatures of a Staffordshire winter. I used to get so cold it made my nose bleed. Then during the holidays I would also work in a factory, standing on a line packing biscuits. At least this was warm and we could eat as many custard creams as we wanted to, a novelty that wore off after a couple of days. I earned enough to keep me in eyeliner and concert tickets, but there were some very grim days amongst the good ones.

The latest newsletter from the ALCS includes a profile of author Peter May, who gives an honest account of how much he earns. He is a full-time writer and his annual income is - wait for it - £11,000. While the J K Rowlings of this world earn the big bucks, most of we jobbing wordsmiths are just bobbing along, poor but relatively happy.
Posted by Julia Thorley at 08:30 8 comments:

Email ThisBlogThis!Share to TwitterShare to FacebookShare to Pinterest
Labels: ALCS, income, Peter May

I've just been sidetracked into listening to an episode of Tongue and Talk: the dialect poets on th'i-player. I'm supposed to be proofreading something about logistics, but when your mother sends you an intriguing email it would be rude not to follow it up.

Mum is a real poetry buff: she reads it, writes it and performs it, usually from memory, which always impresses me. It seems this gift extended to her Aunt Lucy, who Mum says was as deaf as a post but nonetheless partial to a little recitation.

One of her party pieces was a poem called 'Bowton's Yard', by Yorkshire born but Lancashire bred dialect poet Samuel Laycock (1826-93), 'Laureate of the Cotton Famine'. This gem was based on a real terrace in Stalybridge, where Laycock lived, called Bolton's Yard. It describes in turn the inhabitants of this row of houses and was, apparently, a huge influence on Tony Warren, creator of Coronation Street. It's not hard to see why. You can listen to it here.

I was brought up in Uttoxeter in Staffordshire (or, as we would say, Utcheter in Staffyshire) and still have a few dialect words in my vocabulary (nesh, mardy, two-double, plattin' em), but I haven't really got a Staffs accent - except when I get angry or have spent too long back home with the folks. If you want to know what it sounds like, say the title of this post. It means 'How to speak correctly.'

I hope you all enjoyed the Bank Holiday weekend. Is it too soon to start planning for the next one?

I hope not, because I'm excited to confirm that on Sunday 27 May, as part of the Festival Books at Delapre Abbey in Northampton, I'm running a workshop on 'Creating Fictional Characters'. Now, I appreciate that not all of you live within spitting distance of the county, but if you did happen to be free it would be lovely to see some friendly faces looking back at me.

The site is worth a visit for its own sake. There has been an abbey there for over 900 years, but it fell into a sad state during the 1990s. Now the building and the beautiful grounds have been restored and it is a venue for all sorts of activities.

Tickets can be booked here.
Posted by Julia Thorley at 15:08 8 comments:

This is something I overheard in a local coffee shop recently - and I really wish I hadn't. The speaker was a shabby woman, 59. I know, because she'd been talking about her next 'big birthday bash' at some length. She had her back to me, which was probably just as well, so she couldn't see my reaction.

'There was a woman in Asda yesterday: looked like she'd just got off the boat. Great big woman, wearing all the gear - big, flowery scarf around her massive hair, full-length robes.'

'Mind you, she could speak English. Some of them can, can't they? I expect she was well-do-do. Perhaps her family had saved up and got her educated.'

Pause. Slurp. Bite of cake. New topic, without any sense of contradiction.

'My brother's been over from Oz. He's lived there nearly ten years now and he loves it. Says he wouldn't come back here for anything.'