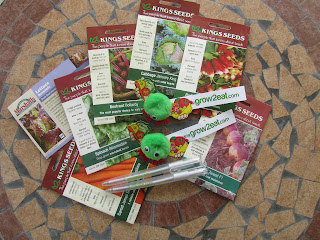 I was delighted when the postman delivered an unexpected package yesterday from those lovely people at grow2eat.com, 'the ultimate horticultural discount directory'. Despite the fact that this sounds like yet another organisation just trying to make you buy something, I'd recommend its newsletters to my fellow allotmenteers. Anyway, in return for a little something I did for them, they have sent me a bundle of goodies (pictured), amongst which was a packet of cabbage seeds. I shall sow them, against my better judgement: I'm not a huge fan of cabbage and I'm definitely not a fan of debugging cabbage before cooking. However, in the spirit of adventure I'm going to give it a go.

Meanwhile, my stock of tomato plants is diminishing, but there are still some going begging. My friends have been pestered to take the surplus off my hands and I've delivered some this morning to a lovely lady who swapped some of my plants for a jar of her home-dried chillies. Husband will be delighted.

Come the revolution, when, if my son's predictions prove correct, Scotland, Wales and Cornwall have abandoned England to its own devices, when London has rebuilt its wall and the rest of the country has reverted to a feudal way of life, I reckon bartering will be the only way to go. Who knows: even cabbage might turn out to be useful.
Posted by Julia Thorley at 13:30 8 comments:

So that was May

It's time to Celebrate the Small Things again, and I'm hoping that any time soon we can start to celebrate some warmer weather. What was up with May?
Anyhoo, think positive. Looking back, I can celebrate:
Have a great weekend, folks.
Join in the bloghop every Friday and celebrate something large or small. See Lexa's blog for details  or check out co-hosts L.G. Keltner at Writing Off The Edge
Katie at TheCyborgMom 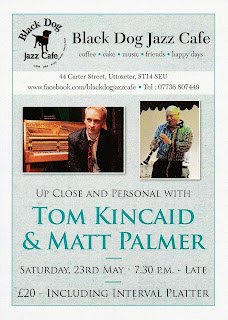 The quest for live music goes on. I went to four events last week: Fairport Convention at the Arts Centre; The Undercover Hippy and Matt Woosey house concerts in my friend Rachel's flat; and then a trip to my old home town for Tom Kincaid and Matt Palmer at the gloriously named Black Dog Jazz Cafe. On the ticket (pictured), note the inclusion of an 'interval platter'. When was the last time you enjoyed one of those? Fair to say this is an eclectic mix, but what they have in common, apart from fabulous music, is small venues. It really is the best way to experience live music.

This week is going to be quieter. I've given my Dara O'Briain ticket to my son because it's for Thursday and I don't want to miss ukulele practice again. I'm sure he and his dad will have a great time.

It looks rather quiet on the work front, so I shall either clean the house (pah!) or catch up with some reading. I'm in the middle of Christopher Fowler's The Bleeding Heart, which is one of the Bryant  & May detective stories. Love this writer. I'm also dipping in and out of Fragile Things, which is a short story collection by the man who can do no wrong, Neil Gaiman.

I'm hoping that if I surround myself with talented people and their works some of it will rub off on me eventually.
Posted by Julia Thorley at 15:58 No comments:

My fellow blogger Helen Yendall has published an excellent post called Reality TV as 'Research for Writers', which you can read here.

In similar vein, I've just rewatched the pilot of the wonderful series House, and it struck me that it is a masterclass for writers in how to avoid the awful information dump. There's some witty dialogue between the main protagonists in which we learn the relationship between them, along the lines of 'Just because you're my boss...' and cleverly posed questions, such as as when a patient asks Dr House 'What's wrong with your leg?' This seems like a perfectly natural way to find out what's what.

There are subtle pictures, too. As a way to give a patient mints instead of painkillers to achieve the placebo effect, we see Dr House empty a tub of vicodin into his pocket and replace them with the sweets; but why doesn't he just get a spare pot in the first place? Because he wants the drugs for himself, course!

I loved this series when it was on, and bought the box sets when it switched to a channel I didn't have. I watched it all the way through again, and delayed watching the last episode because I didn't want it to end. I did the same with Breaking Bad.

Give me a moment and I'll come up with some British shows that I've enjoyed as much. 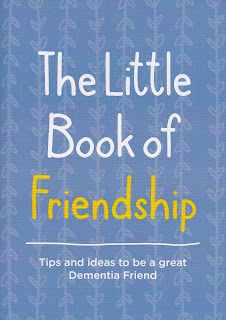 Of course, it's not just the elderly who suffer from dementia, a fact amply demonstrated in the film Still Alice. This stars Julianne Moore as a 50-year-old linguistics professor who suffers from early-onset Alzheimers and follows its devastating effects as her illness worsens. It's a good film and worth a look; or read Lisa Genova's novel of the same name on which the film is based. I promise it's not as depressing as it sounds.
Posted by Julia Thorley at 13:52 2 comments:

Everything in the garden's lovely

I had a splendid weekend. It began with a yoga class with Carrie-Ann at Yoga Freedom. We finished with a deep relaxation: so deep that when she asked us to start moving our fingers and toes I was convinced I hadn't got any. I had to try really hard to connect with my body.

I came home full of energy, though, which I used on all manner of domestic tasks, including a hefty session of gardening. Lots of things are starting to grow on our indoor staging, in the mini plastic-covered greenhouses we have outside the back door and in the soil at home and at the allotment. I spent all Sunday outside, too.

There is no cute bird picture to accompany the blog this week. Instead I give  you... 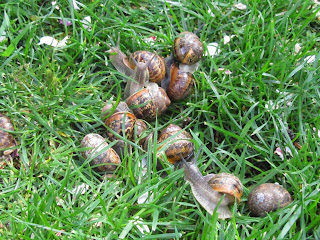 Entertainment on Saturday evening came in the form of comedian Patrick Monahan at the local arts centre. He is such a lovely man and absolutely hilarious. Husband and I have seen him at this venue before and as he was seeing out each member of the audience with a personal hug (honestly: he always does), he said to Husband: 'You were here last time. You're a baker, aren't you?' Very impressive.

We have another comedy night booked for Thursday (local boy made good James Acaster hosting a charity do), Fairport Convention on Saturday, then the Undercover Hippy on Sunday. This is why we never have any money. Hey-ho.
Posted by Julia Thorley at 16:20 4 comments:

I know I'm a day late, but may I add my celebrations, please?

1. Democracy. I might not like the result, but I'm celebrating the fact that we have a free vote. My son voted in his first General Election this time and said it was good to be able to vote without fearing for our lives.
2. I've finished my FutureLearn course on forensic psychology. I've learnt a lot - including that I would be a hopeless eyewitness.
3. A busy week on the work front.
Onwards!
To be part of the Celebrate the Small Things blog hop, all you have to do is put your name on the linky list on Lexa's Blog, and then post every Friday about something you're grateful for that week.
Posted by Julia Thorley at 06:36 4 comments:

I used to have a small column in our local newspaper in which I could write pretty much anything I liked. I tried to keep it positive or, at least, reasonable. I've never written for the national press, but if I were to, I hope I'd maintain the same values.

I'm not a regular reader of the Mail on Sunday, but I gather from people who are that the stock in trade of Ms Liz Jones is to be nasty. On 26 April, she wrote a very snide piece about yoga, entitled: 'Yoga won't make you slim, dahling - just deeply boring.' Well! (Cue rolling up of sleeves and formation of some very unyogic responses to this.)

She is, of course, deliberately trying to rile folk, and won't give a hoot what I or any other yoga people think. In any case, we can rise above it with our 'sheen of smug self-satisfaction'. The whole thing made me splutter with indignation, but it also made me laugh because her writing is absurd. Three things in particular are worth a mention:
I can only conclude that either I'm not teaching it right or that whatever class Ms Jones has been to it certainly wasn't yoga!

Today I'm celebrating the Raunds Music Festival, a local event that celebrates folk music in all its forms. I was there last night at a 'Song & Tune' session, with my ukulele, and tonight the mighty Raunds Ukulele Orchestra of which I am a member will be strumming out a few tunes at the ceilidh. Watch out for our imaginative interpretation of 'Those Were The Days'. I kid you not.

I'm also celebrating the loyalty and commitment of my yoga students, who keep turning out to support me.

Nothing much to celebrate on the editorial front. It's rather quiet at the moment, but I'm expecting great things of May. (Mind you, on Monday I said I was expecting good things of this week. Hmm.)

Have a great weekend - and the Bank Holiday, if you're a Brit.

To be part of the Celebrate the Small Things blog hop, all you have to do is put your name on the linky list on Lexa's Blog, and then post every Friday about something you're grateful for that week.
Posted by Julia Thorley at 16:06 5 comments: