That which no longer serves

I've been suffering from a touch of post-holiday blues this week. My plan to hit the ground running and be a creative dynamo came to nothing. Let's face it, I've been a bit mardy. There were a couple of incidents that didn't help my mood.

1. I learned that two people who were going to be buying copies of Stripped-back Yoga won't be doing so, because a well-meaning friend has lent them her copy. This I interpreted as 'We didn't think your book was worth buying.'

2. I had someone cover one of my yoga classes last week and of course I asked my students how they got on. 'Oh, it was brilliant; we really enjoyed it,' became 'She was much better than you' in my miserable state of my mind. Honestly, I'm my own worst enemy sometimes.

However, I've rallied (aka pulled myself together) and I'm finishing the working week in relatively good spirits. It's not been all bad, of course. The theme of this week's yoga has been: Breathe in what you need; breathe out anything that is no longer serving you.' I've followed my own advice and unsubscribed from a lot of online dross. I've also decided not to update my other blog, Yoga? Here's what I'm thinking, at least for the time being. I can see from the stats that people are reading it, but rarely is anyone moved to leave a comment. I can only assume they are not served by it.

It's September tomorrow. Time for a fresh start.
Posted by Julia Thorley at 15:19 4 comments:


In 1984, my family went to the Leicester Haymarket Theatre to see Me And My Girl. This was the revised production based on Stephen Fry's revision of the original book and ahead of its transfer to the Adelphi in London's glittering West End. It was a wonderful evening and we all came home singing.

As part of our recent trip to Cornwall - well, actually the main reason for the visit - Mr Thorley and I went to the fabulous Minack Theatre (right)  to see The Mitre Players' production of this same musical. It may have lacked the tap-dancing prowess of Robert Lindsay and Emma Thompson who played the leads Bill Snibson and Sally Smith in the Leicester version, but Paul Grace and Megan Brown did a great job in the roles. Once again, we came home singing.

We stayed a few miles inland in St Buryan, home to John Le Carre (which I didn't realise until we got home). It might only have been a week away, but I feel refreshed - and have come back with a notebook full of scribbled ideas for stories.
Posted by Julia Thorley at 13:33 8 comments:

Here's looking at you, kid. 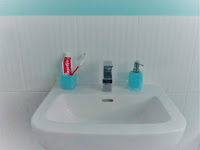 Not without cause do my family call me Little Miss Clumsy. Having distinguished myself with an inelegant trouser moment last week, I managed to get toothpaste in my eye yesterday. I can't tell you how much this hurt! It's still a bit tender today. We are supposed to be sharing the driving tomorrow; Mr T is understandably nervous, although I must point out that I have never written off a car. I'll say no more.

Email ThisBlogThis!Share to TwitterShare to FacebookShare to Pinterest
Labels: clumsiness

Oh, I would like to be beside the seaside

July was such a busy month, what with workshops and spoken word events and book launches, not to mention day-to-day work stuff. I had hoped August was going to be a bit gentler, but here we are on the 11th already, and I feel I'm still playing catch-up. Not that I'm complaining; I hate it when I haven't got a deadline looming or a target in my sights.

Even so, I could do with a holiday. I've got one coming up soon, so don't feel too sorry for me. I'm trying to get four weeks' work done in three (because freelances never just disappear into the sunset), but at least it's quiet at home at the moment, because Mr Thorley has gone off on his golfing jolly with his chums. This has left me with the dubious honour of caring for the tropical fish and keeping on top of the allotment picking.

All of which means, I have little to report of any interest, except that on Wednesday I distinguished myself at dancetheatre rehearsal by ripping my trousers through over-enthusiasm in the warm-up routine. I tried to keep my back to the wall as much as possible, but in the end I gave up all attempts at modesty. Good job we're close friends.

Did I mention I need a holiday?