I mentioned a few weeks ago here that I had been invited to join a spiritual book club. We had our inaugural meeting last night in the snug of a lovely local hotel, under the guidance of new friend Helen.

I'm sure my fellow participants won't mind my saying that we were a curious bunch, in both senses of the word. Amongst us were a number of healers of various persuasions and those who have been healed, and ladies who believe they are challenging energies from various sources, including God and Native Americans. And then there was me: confused but inquisitive.

It was a very good first session, in which we discussed books that had influenced us and set out our stalls, so to speak. In preparation for our next meeting we are going to be reading either The Disappearance of the Universe by Gary R Renard, The Healing Code by Alexander Loyd and Ben Johnson or The Easiest Way by Mabel Katz. I haven't heard of any of these: have you?

It looks as though we are in for some lively evenings. It will be interesting to see if we confine our discussions to the chosen book or whether they evolve into more general philosophical conversation. Either way, I'm looking forward to having my beliefs questioned and my horizons broadened.

Posted by Julia Thorley at 10:26 No comments:

DS Dixon put his feet on his desk, leaned back in his chair and stretched his arms overhead as he yawned expansively. He was a crumpled man, careworn by too many years spent with criminals, too much pacing in interview rooms and far too many meals eaten straight from their wrappings while sitting in his car. Retirement was in sight, but he had one more case to solve before he could move to that cottage in Seahouses he’d promised himself.
During the past month, there had been eight burglaries on the Highcroft estate, an unremarkable collection of homes built in the 1970s now definitely showing their age. But the houses had been well built and by today’s standards the rooms were spacious; and while there wasn’t room to graze a pony in the garden, you could certainly put up a greenhouse and still have space to host a barbecue. It was populated by middling families who weren’t doing quite as well as they’d like and who had aspirations to move either across town to Glebelands or into one of the nearby villages.
The first case had been reported by Mr and Mrs Jackson. They had returned from work to find that their TV had disappeared, together with their DVD player, a collection of films and a laptop. There was no damage or disruption, but still they felt violated. A crime number had been issued to satisfy their insurance company, but since there were no fingerprints or other evidence, Dixon and his colleagues knew there was little chance of finding the culprits. Certainly the items were long gone by now.
Then a couple of days later, the Browns reported a similar break-in, having lost not only everything electrical out of their living room, but also a lawnmower and two mountain bikes that had been stored in the garage. Again, no clues. The police, as they say, had nothing to go on.
Actually, to call these break-ins wasn’t strictly accurate, because there was no sign of forced entry. It was as though the thieves had simply let themselves in through the front door, taken what they wanted and left, locking up behind them.
Two similar cases is a coincidence, but eight within a two-mile radius? No, there must be a link. But Dixon, tired and fed up, was bereft of inspiration. There was nothing to connect these families. Some had left a spare key with a neighbour, but not the same neighbour. They didn’t work together, or belong to the same gym or support the same football team. In fact, the only thing they had in common was that they lived on Highcroft and were out at work all day.
Wearily, Dixon brought all four legs of his chair back to the ground. Perhaps inspiration would strike with a shot of caffeine inside him. As he approached the vending machine, he could hear a young PC complaining to his colleague: ‘I’ve taken my car in for a service so the wife dropped me off today on her way to work. Trouble is, I just remembered I’ve left my kit at home and it’s five-a-side practice tonight.’
Dixon wasn’t really interested, but he said,’ Can’t someone give you a lift home to pick it up?’
‘No point, mate. The keys are at the garage.’
‘Which garage? Are they any good?’
‘Speedy Service on the Harrington Road, on the edge of the Highcroft estate. Here, I’ve got their number somewhere.’ He dug into his pocket and handed over a business card.
A few days later, that young PC was moaning that he too had been robbed. Suddenly Dixon saw how simple it was to take the house key from a bunch hanging temptingly in the Service Department backroom, make a copy and return it. Job done.

“I wrote this short story to impress Solopress.”
Posted by Julia Thorley at 10:36 No comments:

Things I'm pleased about this week

Time to Celebrate The Small Things again. Rather a quiet week, but here goes: 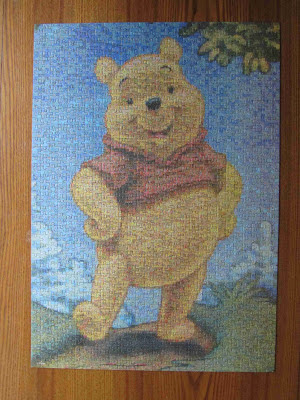 1. Finished the Winnie The Pooh jigsaw I started weeks ago. It is 1,000 pieces, but each one has a tiny picture on it (in 'minature', as the lid annoyingly puts it) and it was ridiculously hard.

2. Think I might actually sell my pine bed on eBay this time. I have a bidder!

3. Sent off a story for the CheerReader comp.

4. Managed to proofread most of the March issue of Logistics & Transport Focus. (What larks!)

Who has something bigger to celebrate?
Posted by Julia Thorley at 17:09 11 comments:

When I was in town the other day, I was approached by a young lady who asked me if I'd like to have my hair cut at Tony & Guy for £10. Further investigation revealed that she wasn't just some random loon picking on dishevelled middle-aged women, but was a student who needed some heads to practise on. Since it's been a while since I'd had a 'do' I took the plunge.
Despite the fact that Abby (for that was her name) only looked about 12, she made a lovely job. My hair is very thick and tends to be a touch unruly, if I let it (which I have just recently - who mentioned Hagrid?), so she did well to tame it. There was a worrying moment before she finished my fringe that gave me a look of a Norwich canary, but by the time she'd done I was much improved.

***
I've just overheard my son talking to his friend via Mumble saying: 'You can't keep a fish in a dog-food container.' I can only imagine what led to that. It reminds me that his brother once told me: 'You can't make an omelette without grating cheese.'

***
I had a thorough workout yesterday helping my mum into her Ted socks, those examples of sexy hosiery that guard against post-op clots or, as Wikipedia puts it: '. . . are designed to remedy impaired musculovenous pump performance caused by incompetent leg vein valves.' I love the idea of incompetent leg valves. If only they'd try harder there wouldn't be a problem!
Posted by Julia Thorley at 16:27 4 comments:

So what am I celebrating this Friday?


How are things with you?
.

One for the writers

For those writers amongst you, I've just had the following email from Ecover, the green cleaning products firm:

Ecover are looking to find two aspiring journalists to report on a ground-breaking new project that we are launching in March 2013. If you are a team player with excellent writing skills and a 'can-do' attitude with good understanding of social media, then this might be your opportunity.

As the Ecover Citizen Journalist you will report on the pioneering new project, attend the press launch and conduct interviews for The-Splash magazine. You will also have the opportunity to attend Glastonbury Festival 2013 (with a friend) to report on the public's reaction to the project and soak up the unforgettable festival atmosphere. What's more, you are invited to attend RHS Hampton Court Flower Show 2013 to conclude the project.

We'd also like you to attend the project launch on the 6th of March!

Conducting face to face interviews at various events before writing up articles, and blog entries, for 'The-Splash' and promoting the project through personal social media channels. (NB The Project runs from March 2013 to July 2013)
The chosen candidate will be given two tickets (one for themselves plus a friend) to Glastonbury 2013 - Ecover will subsidise project travel costs
Details: www.the-splash.co.uk/offers-and-competitions/citizen-journalist

I've not read the small print, but it sounds interesting.
Posted by Julia Thorley at 16:53 No comments:

Three of the best: yoga, walking and soup

There is always the risk that turning a hobby into a job can take the joy out of it. I'm trying hard not to let this happen with my yoga, and with this in mind spent yesterday with a lovely group of people in Lincolnshire at a yoga event just for fun: no note-taking, no handouts to read, no pressure to take anything away and apply it in my own teaching, no being there just because I needed some CPD points: I went because I thought it sounded like a good day out - and I was right.
The event was organised by the East Midlands Region of the British Wheel of Yoga as a 'Yoga & Walking Workshop'. First we had a lovely slow practice focusing on hips and legs. Then after a quick cuppa we strapped on our walking boots and headed off up a hill - yes, there are hills in Lincolnshire: who knew! - to put into practice our newfound connection with our feet (!). It was very muddy, but the sun was out and the sky was blue.

After slithering our way back to the village hall, we were treated to some delicious homemade soup, lemon drizzle cake and flapjack, which was just what was needed. The afternoon session saw us all blissed out with a lovely relaxation.

It was a fabulous day and really lifted my spirits after what had been a rather trying week. Huge thanks to organiser and soup-maker supreme Julie, and our excellent workshop leader Liz Underwood.

How can it be Friday again already?

I'm very aware that I haven't posted anything since last Friday (slap on the wrist for me). Been rather preoccupied. But here are the small things I'd like to celebrate this week.
Onwards!

If it's Friday it must be time to Celebrate The Small Things.

What are you celebrating?