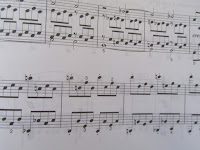 Following the excellent day I spent with Bridget from Wild Words recently, I've been focusing on covering all the senses in what I write. Sight and sound are the easy ones; touch isn't too difficult; but smell and, especially, taste are proving to be a bit of a challenge. I was writing a piece of fiction yesterday about someone sitting in a traffic jam (trust me: it's more exciting than it sounds) and couldn't think of a way to bring taste into it without really forcing it. 'He ran his tongue over his teeth and remembered that morning's fried breakfast' is lame and just a little bit unpleasant.

Anyway, I've been aware of sound in unexpected places over the last couple of days. In my yoga classes, for instance, I have a lady who insists that the gentle purring sound we often hear during relaxation isn't her. She says she even stays awake so she can work out who it is! Trust me on this, too: it's definitely her.

If you watched Would I Lie To You? this week, you will have heard Sheila Hancock telling a story about one of her stage appearances being interrupted by an audience member's attack of hiccups. (I won't spoil it by saying if her tale was true or a lie.)

Well, on Sunday, Mr Thorley and I went to hear the Royal Philharmonic Orchestra in Northampton for a concert that was brought to us by the letter B, featuring Brahms, Beethoven and Bruch. The gentleman sitting next to me, a jovial fellow who filled his seat well, was a hummer. I don't mean he was smelly, but that he kept joining in. Rather than being annoyed by this, I found it hard not to laugh out loud. Clearly, he was singing along in his head, but every now and then a bit of music escaped. It was just a little snatch of maybe three or four notes and I'm sure he didn't know he was doing it.

Bless him. He may well appear in a story one day.
Posted by Julia Thorley at 10:00 6 comments:

CTST as November draws to a close

Today I'm celebrating a week where I've been connecting and reconnecting with  people. (I wrote about this on my yoga blog here, too.)

On Monday I went to see a friend I made when I had my first proper publishing job many moons ago. It was lovely to catch up and to meet his fiancee. On Tuesday I had a cuppa with a yoga friend and then another friend popped in for a chat, too. I've also had a regular so-called working lunch with a fellow freelance. As if that wasn't enough, I've also had an email from the wife of my cousin out of the blue for no reason other than to say hello.

This is all good stuff, and when the world is going slightly mad for Black Friday it's been a useful reminder about what is really important.

If you would like to join this bloghop, send your details to laura.6eg@gmail.com  and she will do the necessary.
Posted by Julia Thorley at 16:08 2 comments:


Thursday evening and I'm sitting in the Lighthouse Theatre, Kettering, waiting to see Dr John Cooper Clarke. He was ably supported by Toria Garbutt and Luke Wright. Check them out on You Tube so see how performance poetry should be done. Incredible (but a bit sweary!).

Friday evening and I'm the Shared Church in Ringstead, watching a one-man performance of 'I Am John Clare', a beautifully written (by Stephen Loveless)  and performed (by Robin Hillman) piece of word art.

Then yesterday, Saturday, I spent the day in the beautiful Suffolk town of Lavenham (aka Godric's Hollow, Potter fans), taking part in a creative writing workshop led by Bridget Holding of Wild Words, meeting lovely people, sharing ideas and coming away inspired.

Can there be a better way to pass the time?
Posted by Julia Thorley at 11:24 No comments:

You knew it was coming and here it is: Nine Lives: Monologues and first-person stories for reading aloud is now available to buy online from the Amazon Kindle store here or in paperback direct from me. I was going to share this on Friday, but I didn't have the books in my grubby little hands and didn't want to tempt fate.

Here's the back-cover blurb:
Meet the cast: a no-nonsense woman in her 60s who has a brush with authority; a down-at-heel private eye; a weary young mother from times past; a Victorian businessman afraid of progress; an Edwardian woman with her heart set on romance; a young man struggling with life; a teenage girl badly let down; a very special make-up artist; and a young mum who gets the last laugh. Each has a story to tell.
Now, I don't mind if you read these stories aloud or keep them in your head. Either way, feel free to be creative with the voices. You might hear something different from the ones that were on my mind when I wrote the stories
As always, I'd love to hear your comments.
Posted by Julia Thorley at 14:00 8 comments:

What can I say about this week? There are potential celebrations on the horizon, but it's too soon to share them with any confidence. I'll let you know when I know.

Instead, I'll just tell you this. Coming out of yoga on Tuesday into the pouring rain, a couple of us grumbled about the cold. One woman put us all in our place: 'I don't mind it,' she said. 'I'm just glad to be alive.'  Will that do for today?

Celebrate the Small Things  is a blog hop co-hosted by Lexa Cain at: Lexa Cain,  L.G. Keltner @ Writing Off The Edge , and Tonja Drecker @ Tidbits Blog. (You can go to any of these sites to add your name to the links, if you want to participate. )
Posted by Julia Thorley at 17:04 8 comments:

A story for bonfire night

Some time ago I wrote a 100-word story for a competition organised by writer Morgen Bailey. If you're not familiar with her, I strongly recommend you pop over to her website here. In fact, if you visit today (5th November) you can download one of her books free of charge. Anyway, my little story was highly commended, so I won one of Morgen's online courses. Since it was on the theme of fireworks, it seems appropriate to share it today:

She clutched his hand beneath the canopy of colour and light, as the explosions illuminated families and friends, and other couples just like them, their gasps visible in the autumn chill. They felt the energy poised to be released, hanging in the air and eager to be tasted and absorbed. Then at last it exploded in unexpected and delightful ways. The next morning, the damp grass was littered with debris where expectation had come down to earth. She picked her way through the empty tubes and fallen rockets, avoiding soot and scorch marks, reminders of last night’s anticipation now spent.

*A type of firework. An effect that hangs and trails in the air not unlike a willow, often strobing or twinkling. Commonly used in finale sequences to fill the sky with long-lasting effects that often persist to near ground level.
Posted by Julia Thorley at 11:05 8 comments:

I have a rather surprising celebration today. About a month ago, I took a phone call Geraldine from the Nectar Points helpline. She wanted to check my address because, she said, I'd won a prize in one of Sainsbury's Swipe to Win competitions.

In case you're not familiar with this, every so often Saisnbury's will send out marketing emails about various promotions and to take part all you have to do is click 'I'm In' or somesuch and put in your Nectar card number. Then when you buy the qualifying product in store you are automatically entered into the draw. I generally click to say I'll enter regardless of what I'm expected to buy and then think no more about it.

Anyway, Geraldine told me I'd won a 40-inch Samsung TV. Yeah right, I thought. This must be a prank.  But no: a TV has been delivered! I must have bought a Cadbury's product at just the right time. I'm not really a material girl, but I'm not sending the TV back!

Have a good weekend, folks.
If you would like to join this bloghop, send your details to laura.6eg@gmail.com  and she will do the necessary.
Posted by Julia Thorley at 19:51 4 comments:

I had a bit of fun this morning when I popped into town to record a video interview for a colleague's website. He runs a company that helps author's self-publish and asked me if I'd do a little testimonial for him, which I was happy to do.

So notwithstanding that I'm desperately in need of a haircut and received wisdom says a middle-aged face doesn't look its best until noon, I was there at half-nine doing a Q&A in front of the camera. I can stand up and speak to a room of yoga students without a script, but was quite nervous about the prospect of answering some basic questions about a subject I know well. Anyway, I did it and the chaps seemed pleased, so that's that.

Only about 30 seconds will be used and I'll wait to see the results before I decide whether or not to post a link.