Why not join us in Celebrating the Small Things? This is a bloghop instigated by VikLit on her blog 'Scribblings of an Aspiring Author'. Details are  here.

Top of the list of celebrations for me today has got to be the last day of February. Good grief, what a dreary month it's been. Bring on March!

I'm also celebrating the installation of my new kitchen door. Some women get excited at the prospect of acrylic nail extensions. Not me, I'm all about the DIY at the moment. But look at it: isn't it splendid? 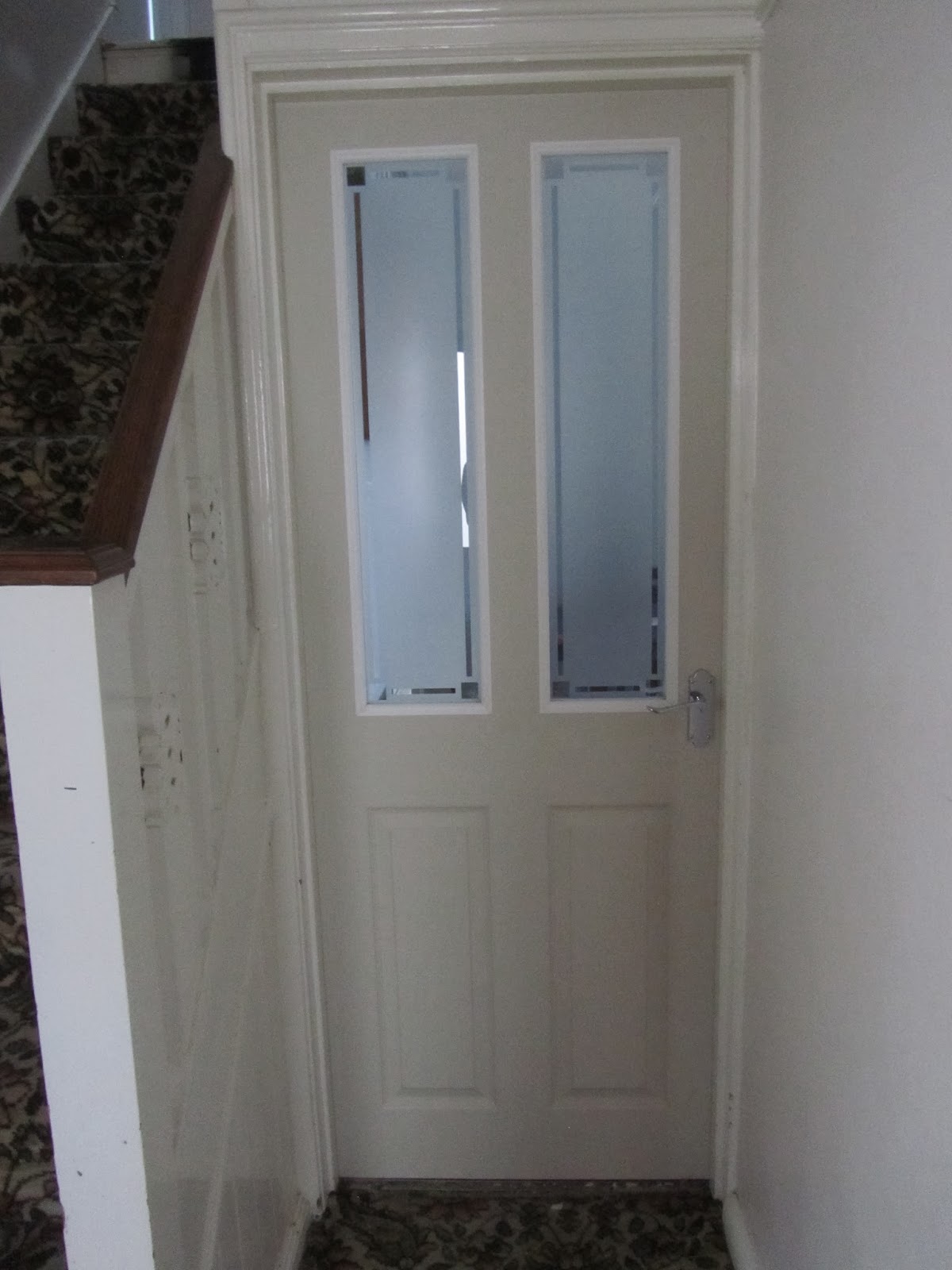 Have a lovely weekend, everyone.

(PS Sorry about the huge gap at the top of this post. Don't know how it got there; don't know how to get rid of it.)

On 18 November last year, I was contacted by Grow Your Own magazine, asking if I could email them my postal address so that they could send out my prize for my 'Star Letter' - £40 of Thompson & Morgan vouchers. Despite much chasing, they still haven't arrived. I need to buy veg seeds!


***
Where is everyone this week? I've had hardly any phone calls and not many emails. I'm so bored I've even resorted to housework.

Email ThisBlogThis!Share to TwitterShare to FacebookShare to Pinterest
Labels: Grow Your Own magazine, Thompson & Morgan. 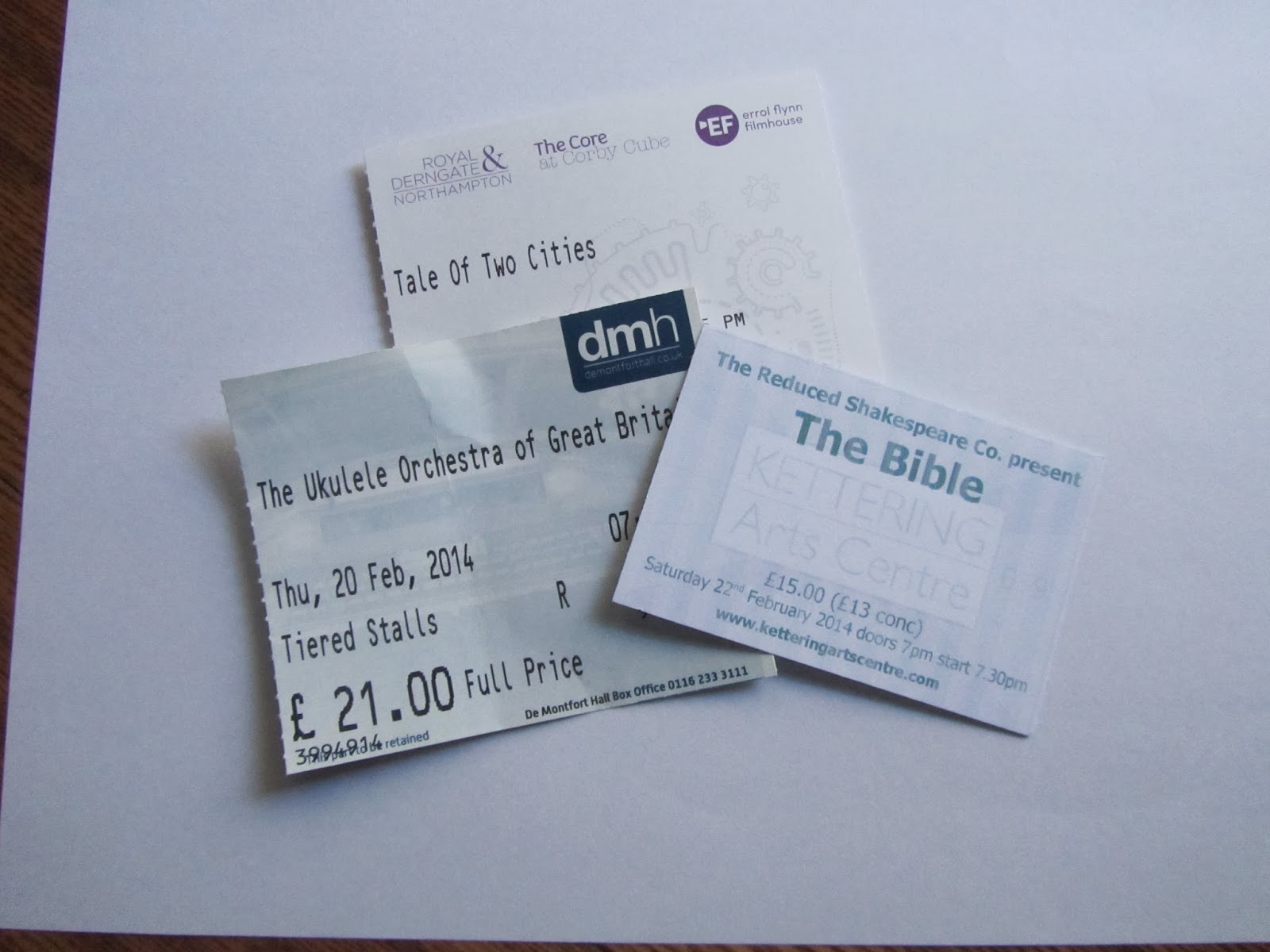 Lots happening this weekend. Last night I went to Leicester to see the Ukulele Orchestra of Great Britain, which was great fun. I went with a fellow uke player and we decided that we've either got to set fire to our instruments or practise MUCH harder.

Tonight I'm off to the theatre in Northampton to see A Tale of Two Cities. My friend Will is in it, which is very exciting.

Tomorrow, we have tickets for Kettering Arts Centre, which is hosting the Reduced Shakespeare Company's The Bible, which you might have seen mentioned in the press as being a bit controversial. There have been accusations of blasphemy. Since our arts centre is run by the vicar and his wife, I'm not expecting to be offended.

On to the celebrations. This week, we have been celebrating my son's birthday, which we managed to stretch out over several days.

Also, a BIG celebration that the £600 I was owed by a client for work done in December has been paid today.

Celebrate the Small Things is a bloghop. Join in the celebrations via VikLit's blog 'Scribblings of an Aspiring Author' here.

Have a lovely weekend, folks.
Posted by Julia Thorley at 17:05 14 comments:

When you're reading, do you need to know whether the author is male or female? Does this affect the voice you hear in your head or your expectations of the content? I ask because I'm reading a book at the moment that is credited to a man but that I know was written by a women. (I'm sorry, but I've got to say it: I met her at Cheltenham Literary Festival.)

It's not the sort of thing I usually read - it's about an assassin and it's a thrilling tale of spies and murder and subterfuge - so I'm having to take it quite slowly in order not to miss anything; but all the time, at the back of my mind is the thought that I can't believe the tiny, smart, funny woman I met is responsible for the violence and swearing and general nastiness in this book. Don't get me wrong: I'm enjoying it, but I just can't reconcile the two images.

What is nice, though, is that the copy of the book I have is the one the author used for her Cheltenham session. She was one of a panel of three crime writers who discussed the genre and gave readings from their books. So not only is it signed to me, but it also has handwritten notes in it, such as: 'Crisis for [the assassin]. Sets him on path to redemption.' and 'Interaction between characters. Push and pull - conflict - driver for thrillers'. Nice insight into the mind of a writer.

Unlike this. I've just been looking back through my 'ideas and snippets' notebook and have come across a line I wrote some time ago. I can't remember when or where, nor do I know what it means: 'Llittle men on handmade stools.' Make of that what you will.

... or as my cynical friend Keith put it on Face Book this morning: 'Happy Price Hike Day.' Misery!

I'm celebrating have just had pie and chips for tea, lovingly prepared by my other half. You can keep your oysters and champagne. The way to my heart is definitely with pastry. Mmm.

Things have started to move on the decorating front this week. Justin the plumber has installed two lovely new radiators and Mick the chippie has put in two new doors. Next job is to book the electrician to come and work his sparky magic on some lights. Let's celebrate tradesmen who can go for hours on a mug of tea. (Two sugars, love.)

That's all for this week. I'm now off to lose myself in a box of chocolates. Again: mmm!

Join in the celebrations via VikLit's blog 'Scribblings of an Aspiring Author' here.

The first time I went skiing, I was still young enough to find the word Ausfahrt amusing. Clive and I joined a gaggle of similarly puerile 20-ish friends and went to a budget hotel in Kitzbuhel, in the days when winter sports holidays were still considered to be rather elitist. Even now, I’m really not sure what we were doing there, with our gaucheness and hand-me-down salopettes, but we had a great time.
To call the food at the hotel adequate would be kind. Each meal was accompanied by some peculiar item that resembled a deep-fried Yorkshire pudding and that became known as 'random starchy filler'; and we decided that the bakery must only deliver once a week, because the breakfast rolls became staler and staler, until by Friday they resembled Energen Crispbread. (Anyone who doesn’t remember the 1970s should Google these so-called diet rolls.) Fortunately, we were able to boost our calorie intake with copious quantities of gluhwein, hot chocolate and mini Mars Bars.
We made several more trips to various mountain resorts, but my skiing never seemed to get any better. I was very stylish, but oh so slow. The trouble was that, like everything, I wanted to do it properly, which meant that I took in the instructor’s every word and could execute beautiful parallel turns, but lacked the recklessness that allowed by friends to hurtle down the runs twice and sometimes three times to my single, stately decent. On the other hand, I never broke any bones.
I am thus amazed by the Winter Olympians who hurl themselves about with - well, I was going to say gay abandon, but given the mood in Russia that might be inappropriate. I’ve been watching the slopestyle competitions and just keep wondering: how do you find out you can do that? And the moguls: who decided that rattling down a bumpy run wasn’t dangerous or difficult enough and that what it really needed was a couple of jumps along the way, just to make it interesting?
When we watch the Summer Games, there is always the feeling that, given sufficient training and a following wind, we could do what the competitors do. After all, it’s simply extreme PE – running, jumping, throwing and various versions of bat and ball. The Winter Olympics is different. The word ‘awesome’ is overused and usually incorrectly. Watching the skiers, the jumpers, the bobsleigh, the ice-hockey, the skating and the curling does actually fill me with awe. Well, perhaps not the curling.
Posted by Julia Thorley at 09:53 13 comments:

Join in the celebrations via VikLit's blog 'Scribblings of an Aspiring Author' here.

Today I'm celebrating the end of a very busy week workwise - which is just as well because tomorrow there is a plumber coming to replace two radiators and they have to be paid for somehow. Also on the money front, I'm celebrating a modest win by having my contribution declared Star Letter in the February issue of Freelance Market News.

I'm also celebrating the success of my writing buddy Elaine Medcalf, whose short story Answers From Ghosts is now available from the Kindle Store.

Looking forward to an evening of folk music later, with friends and real ale.

Only slight blot on the landscape is that my mobile phone has stopped accepting texts from number two son. He gets texts from me and old-style talking isn't a problem, but if he texts me it doesn't arrive. Odd - and slightly annoying for him, when he's asking for a lift home, and for me when I'm pacing the floor wondering where he is. Any thoughts, anyone?

Have a splendid weekend.
Posted by Julia Thorley at 17:54 10 comments:

Writers among you will have come across those competitions where the result comes down to an online vote, which could mean that the person with the most friends wins.

Having salved my conscience by pointing out the drawbacks of this process, I should like to draw your attention to www.leicestermusicfestival.co.uk/playatlmf/ where, if you would be so kind, you could vote for Ivory Yardsale to play at the Leicester Music Festival. Naturally, I wouldn't want you to do this without listening to the band's EP, which you can download for free here.

Thank you, friends.
Posted by Julia Thorley at 15:04 4 comments: