My friends and I were putting the world to rights last night over a glass or two and a bowl of Twiglets, and the conversation ranged far and wide as it is wont to do whenever five opinionated women get together. One topic that came up was why it is so much harder to wrap your tongue around foreign words when you speak than when you sing. I don't mean understanding the words - essential to the former, but only desirable in the latter - but the actual mechanics of getting the sounds out. 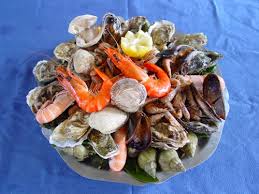 I have a vague idea that somewhere I have been told that speech and music are controlled by different parts of the brain, and that stroke victims who can no longer talk properly can sometimes communicate by singing.

This chimed (sorry!) with an incident earlier in the week at choir practice. We are rehearsing hard for our forthcoming concert, at which we will be revisiting some of Karl Jenkins' The Armed Man. We performed the whole work earlier in the year and are reprising three sections, one of which is the opening chorus 'L'homme armee'. You see, it's in French.

Notwithstanding that we've sung this before, we are little rusty on the words, and it's quite fast, and I could feel the line running away with me. However, in the spirit of being a team player I battled on, but instead of singing 'Que chacun seviegne armer d'un haubregon de fer' what came out of my mouth was a fleeting reference to 'fruits de mer'. Fortunately only the altos either side of me heard this, but the three of us just couldn't stop laughing. Every time we thought we'd pulled ourselves together, one of us would splutter and off we'd go again.

I don't think we shall ever be able to sing this with a straight face again - which might be a problem when we take to the stage in two weeks' time...
Posted by Julia Thorley at 12:48 2 comments:

I've had a weekend of culture at the Malcolm Arnold Festival in Northampton. If you've heard of this composer at all, chances are you think of film music - St Trinian's, Bridge over the River Kwai, for example - but there is so much more to his repertoire. There's the nine symphonies for a start.

One of the key features of the weekend was the world premier of Arnold's opera The Dancing Master. Written in 1952 for the BBC, it was considered too bawdy and has only now received its first performance. I'll leave the critique to someone more qualified than I am. It was, shall we say, interesting.

Among the wide-ranging events were many performances by astonishing young musicians, not only from local choirs and orchestras, but also from further afield, including the Royal Academy of Music and the Royal Northern College of Music. And I mean young: school age through to students in their 20s. But the audience was predominantly made up of the middle aged and beyond. So what happens in between? Where are the folk in their 30s and 40s?

If there is such interest amongst the youngsters, why isn't there a wider mix of ages in audiences for classical musical events? It doesn't seem to happen in other genres. At rock concerts generations mix well in the mosh pit, and the folk scene has every age group represented amongst audiences and performers. Nor do I just mean this particular festival. I've noticed it before elsewhere. It can't be lack of availability, because there are classical concerts in theatres, churches and village halls throughout the land. Is it a babysitting issue? Is it just pressures of modern life? Is it considered elitist?

Anybody have a theory?

I had another of those 'never done that before' moments yesterday when I sang at a wedding. The church choir was down on numbers so one of its regulars, who is also a leading light in the choir I belong to, asked if a handful of us would go along and swell the ranks. So, first time singing at a wedding for someone I didn't know, and first time wearing a proper chorister's gown (rather a fetching blue).

And what a lovely do it was. Before the service started, the vicar did a bit of a warm-up act. It so happened that one of the children was celebrating his birthday, so the vicar got everyone to sing 'Happy Birthday' accompanied by the organist. That broke the ice nicely. Then he rehearsed the congregation with their 'lines'. He announced that after the bride and groom had made their vows and done the 'I do', he would be turning to the assembled family and friends to ask them if they would support the couple in the years ahead, and was expecting a loud and enthusiastic 'We do!' in reply. They were tentative at first, but a couple more attempts got the volume up, and when we reached that part in the service there was a glorious outpouring of love and support. Then later, his address consisted of a couple of jokes offering advice on what not to do in married life, which went down very well.

I'm not a big church-goer, but I enjoy the elements of community spirit it can provide. For instance, I think baptisms should be incorporated into a regular service in front of the whole 'flock' rather than sneaked into a private ceremony with a handful of guests. So while this wedding might not have suited the traditionalists, I thought it was lovely. Congratulations, Dave and Jan. We all wish you well.
Posted by Julia Thorley at 09:16 2 comments:

I've always said I didn't want to get involved with Twitter. However, I'm helping to promote a concert here in Kettering: 'A Musical Salute' in aid of Help for Heroes. For the first time, we are trying to fill a proper theatre, rather than performing in a church, which our usual style. This means we have to draw in a crowd of over 600 - not scary at all!

The lovely people at Help for Heroes said that if I were to tweet the details of the concert, they would retweet it far and wide. As is so often the case, I said I could do that - and then had to go and find out how. Fortunately, I have an 18-year-old to hand who was able to give me a whistlestop tour around the inner workings of Twitter and before you could say 'hashtag' I was up and running. @KettCamerata, if you're interested.

I can quite see how people become obsessed by this medium. The temptation to keep looking 'just in case anything has happened' is quite strong, but I must remember that I'm doing this on behalf of the choir and mustn't get sucked into following David Tennant or other such lovelies.
Posted by Julia Thorley at 16:45 4 comments:

Marcus Brigstocke is my new favourite philosopher. I’m reading his book God Collar and have concluded that he is one of the most thoughtful and thought-provoking writers I’ve come across in a long while. This might surprise you if you’ve only heard him do a quick rant on Radio 4 or seen him play King Arthur in Spamalot, but honestly, it’s brilliant.

On Friday, I had the rare luxury of being able to sit and read for pleasure for over an hour without interruption. I wasn’t in the most comfortable of places, but the book is so absorbing that I soon forgot I was sitting on the kitchen steps in an empty house.

To explain: I was on duty for my son, waiting for a delivery to his new home, while he and his housemate were loading up a van elsewhere. For a bargain price he had bought a bed, fridge, freezer and TV table from the British Heart Foundation shop. Have you ever been in one of their big branches? I’m not talking about the regular, slightly fusty shops where you can buy a floppy t-shirt, a well-thumbed paperback or a pre-owned Toby jug, but the shiny outlets that sell electrical goods and furniture. They should be your first port of call next time you need something for your home.

Anyway, the delivery was made on time and with a smile, and my boy and his friend have moved in without too much difficulty. Well, there was a sticky moment when we thought the boiler didn’t work, but it turns out you have to switch in on first. Doh! And there was that unfortunate incident when the slightly-too-big sofa was mauled down the hallway and took the front door handle with it, but it was nothing that a trip to B&Q couldn’t resolve.

So now the discussions are underway as to what we do with his vacated room in the family home. I quite fancy soft colours and mood lighting to create a haven for a spot of yoga and meditation; husband thinks that with some staging it would be a great place for starting off seedlings, what with all that lovely natural light; while our remaining homebound son thinks it the ideal place to store spare guitars, amps and other musical paraphernalia. I suspect I shall need to apply all my philosophical reasoning if I am to win the day.
Posted by Julia Thorley at 07:10 5 comments: