I know there are still a few days to go, but this is the last Friday of the month: the day when I send out my invoices and pay my bills, which this month includes the dreaded Tax Bill. So this seems as good a day as any to look back and celebrate what I've done during January on the writing front.

As well as my day job editing and teaching, I have:
Last night I paid my first visit to a local poetry group. Well, I say poetry, but actually although poems are the foundation they welcome 'artists' in the broadest sense, so I crept in under the wire as a writer and appreciator. I was slightly nervous, because I'm not a poet and I feared it might have been a bit over my head, but everyone was very welcoming, the nibbles were excellent and a good time was had by all. I shall probably go again.

That's all for now. Have a good weekend, folks.

Join the celebration: share your news on the bloghop Celebrate the Small Things  hosted by  Lexa's Blog.
Posted by Julia Thorley at 16:03 14 comments:

It's a truth universally acknowledged that writers are an insecure bunch. We need constant reassurance that our work is brilliant - that is, if we ever let anyone outside of the family circle* read it. But assuming we venture out to a writing group at which we are expected to share our precious words, what do we think will happen? Is it more useful for people to say, 'Oh, that's lovely, you are clever,' which massages our ego; or is an honest appraisal better? Obviously no one wants to hear, 'That was rubbish, Don't give up the day job,' but something like, 'I enjoyed the start, but do you think you lost your way in the middle at bit?' is surely kind and useful.

Either is fine with me, as long as I know what I'm in for. The group I attend most often is a gathering of people who like to write for its own sake, rather than us having any burning ambition for domination of the publishing world. We've had a modest successes, but that's not what we're about. Other groups, though, have been divisive when the critique of the writing has turned into criticism of the writers. I have dropped out of such groups.

Similarly, the social side is important. These people with whom we share our innermost thoughts aren't friends as such, but they provide (or should provide)  a safe, supporting environment. The role of the group leader is key here, and it's not a job I'd like. How do you make sure everyone has a fair turn at reading and sharing? What do you do with those people who steadfastly refuse to work on the suggested topic, and who drag every activity back to their favourite subject, be it wartime reminiscence or a penchant for satire?

And then there are those people who turn the writing group into their private therapy clinic. We've all got baggage and troubles, but there's a time and a place. I know that sometimes people need to get something off their chest, and a piece of writing can trigger memories and emotions that we weren't expecting. Better out than in, as they say. But isn't it important to remember that first and foremost this is a writing group, and not an AA meeting or a Relate session?

#justsaying, as the Twits, would have it.

Today I'm celebrating what has been a pretty good week. I've done lots of editorial work and writing, enjoyed a fair bit of music-based activity and gone for a little walk every day. More specifically,  though, I'm celebrating the extraordinary courage of a couple of my yoga students who are facing difficult times with grace. 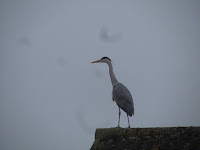 On a more mundane level, while I failed again to get a decent photo of the red kite that was circling tantalisingly close to my garden yesterday, I did get of shot of this fine fellow, who obliged by landing on next door's extension roof.

Best of all, I have nothing planned for this weekend: bliss!

Join the celebration: share your news on the bloghop Celebrate the Small Things  hosted by  Lexa's Blog.

'Behind the jug in Annie's room' 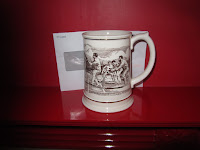 At our lovely Weaving Words writing group this week, one of the prompts we were given was 'Filter', to be interpreted any way we liked. Off you go! I wrote something about clearing space in my head, letting go of stuff that is no longer useful to me and so forth. Not worth sharing as it stands, but I might turn it into something (fabulous) at a later date.

Inevitably, we ended up talking about physical clutter in our homes. I'm not a hoarder, but I am married to one, so I share the pain of random boxes of curiosities that will 'come in for something one day'. One of our group has moved home many times and confessed she has some boxes that have been shifted from house to house without even being opened. My advice was to dump them. She also has a box that has lost its original label along the way and she was written on the outside: 'Lord knows!' Why doesn't she have a look? 'Too scared of what I might find,' she said. That would drive me crazy.

In our house we have a small plastic tub that we call the Kitchen Drawer Box, because when we moved from our previous house the contents of said drawer were tipped into a box and there they have stayed. It's full of things like the radiator key, a tin of 3-in-1, a football boot stud remover and silver polish (these last two being particularly redundant, yet somehow they stay). We've all got these ridiculous places - haven't we?

And the title of this post? That's a family saying. We have no Annie and therefore no such room or  jug, but it's where we say something that you can't find will be hiding.

The way my mind works


For reasons that need not detain us here, I found myself saying the phrase: 'with a spoon in my hand' this morning. This fired up a connection in my brain somewhere and next thing I knew I was singing 'With a song in my heart' - which of course put me in mind of 'The Yorkshire Pudding Programme'. This is not, as Mr Thorley quipped, the latest recipe book to hit the shelves, but is the way I used to refer to the old radio programme Two Way Family Favourites.


Are you following? 'With a song...' was the theme tune to TWFF. Why the Yorkshires reference? Because in my memory bank this is what my mum was cooking whenever the show was on when I was a young lass.  Now, I'm sure this recollection has been distorted by the lens of time, because I can't imagine we had this savoury delight every week, or that Mum's timing was so impeccable. Nevertheless, that's how my mind jumped from one thing to another.

If you can remember this programme, then I'm sorry but you're older than you think you are - although checking the dates, I learned that although it began just after the end of the Second World War  it wasn't axed until 1984! It's heyday though, was definitely the 1950s, '60s and '70s. TWFF was broadcast on the Light Programme (which became Radio 2) and was hosted by real-life couple Cliff Michelmore and Jean Metcalfe (above). It was originally devised as a way for British families to keep in touch with relatives serving in the forces overseas, initially in Germany, but later extending to include Canada, Singapore, Hong Kong and Australia. It's USP (although they didn't call it that then) was that it played mostly recorded music as opposed to live performances, which was the norm. Ah, different times.
Posted by Julia Thorley at 11:36 4 comments:

Did that take you by surprise? Was it not what you expected from my usually dignified blog?

I switched on Radio 4 at about 2.40 this afternoon to keep me company while I got changed for yoga and there was a drama on. Within seconds we'd had the above words, plus a couple of bollocks and a piss off. Well, really! I don't know what Jill Archer would say.

I'm not offended, actually. I'm quite partial to the occasional expletive when the need arises and there's nothing wrong with swearing in context. I mean, I don't think Trainspotting would be the same if Sick Boy started a conversation with:

'I say, old chap, d'you happen to have anything about your person in the narcotic line, please?'

But it made me wonder if there is a watershed on radio. Are programmes allowed to contain any old words and themes, or is there consideration for the fact that there might be children listening? I know Radio 4 is aimed primarily at an adult audience, but if we can't turn on an afternoon play when there is a toddler in the room just in case there's something unsavoury going on - well, I think that's a shame.

Mind you, Father Brown on BBC 1 in the early afternoon was a bit cheeky last week, too, so maybe I'm out of step with what's acceptable. One of my mum's pet hates is that TV announcement: 'The following programme contains adult language.'

Back in the salad

The mistake in the heading (did you spot it?) is deliberate. I typed this in an email to a client and almost sent it, which wouldn't have been a good advert for my editorial skills since I meant, of course, back in the saddle after the Christmas break. Mind you, I am also back in the salad, after the quantity of food and drink I've consumed recently.

I was hoping that for the first CTST of the year I'd have something amazing to shout about, but my celebrations are modest - and none the worse for that: 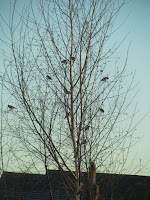 4. A ridiculous number of goldfinches in the silver birch trees at the bottom of the garden (the photo doesn't do them justice).

Join the celebration: share your news on the bloghop Celebrate the Small Things  hosted by  Lexa's Blog.

We've taken down the Christmas tree today and it feels as though the house has heaved a sigh of relief that everything is back in the right place. We're still on holiday, though, for another couple of days and there's Baileys and shortbread that need our attention.

I have mentioned before that I don't do New Year resolutions, but I do like to pick a word to bear in mind - a sankalpa, or intention, as we call it in yoga. This year I'm going with kindness, following on from the advent calendar I had on this theme. I think it did me good and I'm planning to keep it up, if I can. You can join in here.

In other news, there was excitement at the Royal Theatre in Northampton yesterday when in true 42 Street style one of the lead actors had been taken ill in the morning and a local actor (Jamal something, I think) was roped in at the 11th hour to take his place. He did the show script in hand, but made an excellent job and I think the book was more of a security blanket than a necessity. He got a huge round of applause at the end.

Finally, I wonder if Prince Charles is polishing his orb and sceptre. Get well soon, ma'am.
Posted by Julia Thorley at 14:11 10 comments: