When the chap wearing the cut-off jeans and Native American headdress is the normal one in the group sitting on the opposite hay bale, you know you're not in Kettering any more.

We're back from the Barefoot Festival, where I led some meditations - something I've not done at a festival before. Thanks to old and new friends who came along and accepted my offering, and who persevered with me despite the distractions from beyond the Chill Out Area. (Bass? What bass?!)

Big thumbs up, too, to hubby Clive, who embraced the strangeness with an open mind. He had never set foot on a yoga mat until this weekend, but to my (and his) astonishment, he threw himself into the gong baths*, the chanting, the African drumming, the Shamanic journeys and, especially, the Laughter Yoga with Heike. He encountered a Priestess of Avalon, tasted his first cup of chai ('Not as nice as "proper" tea') and connected with  his inner hippy; I never thought I'd hear him say to a total stranger; 'Greetings, glorious goddess.'

It was a wonderful weekend, surrounded by gentle, friendly folk and too many new experiences to list, but I must mention the awesome musicians, including my friend Kenneth J Nash, the circus performers who literally played with fire, the burlesque artistes and the ukulele workshop. We're already thinking about next year.


A few bullet points to finish with:

* Apologies to the wonderful gong bath leader, but I didn't get his name. If you know him (or if you are him), please let me know and I'll change the caption.

Just time for a quick CTST post today as I'm already behind and it's not even nine o'clock yet.

Joe's gig with Ivory Yardsale went well last weekend. Now we're celebrating the release of their new EP called 'Enfield'. You can listen to it on Bandcamp here, and download it, too, should you so wish. They are headlining tomorrow night, but I shan't be able to go because...

...I'm off to the Barefoot Festival for the weekend. Yes, hubby and I have dusted off the sleeping bags and are steeling ourselves for three nights under canvas. It'll be fine (we keep saying). I'm leading some meditation session while we're there, so I get a 'Performer's Pass'!

Make the most of the fine weather, folks.
Posted by Julia Thorley at 08:00 13 comments: 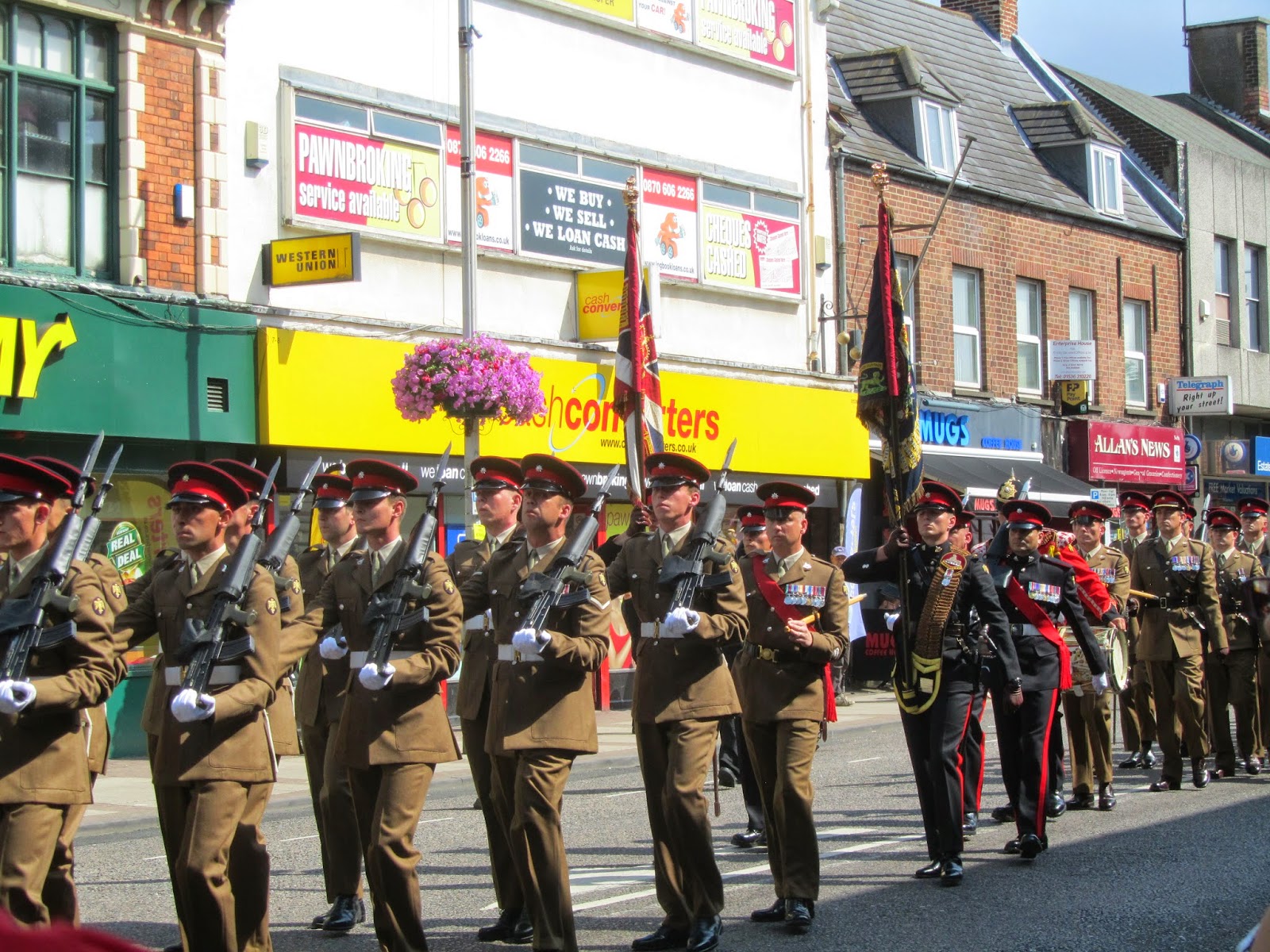 There was some pomp and circumstance in Kettering today, when the 2nd Battalion Royal Anglian Regiment was welcomed home and granted Freedom of the Borough. The regiment is recently returned from Afghanistan. There was a (to me) surprisingly large turnout for the occasion and the route of the parade was lined with folk. The whole thing culminated in a bit of ceremonial wotnot in the Market Square, where various dignitaries made speeches we couldn't hear - but I'm sure they were very nice.

I don't know much about the armed forces. The nearest I've come to any involvement was a brief dalliance with a submariner who later was involved in the Falklands conflict and was on the Sheffield when it was sunk. 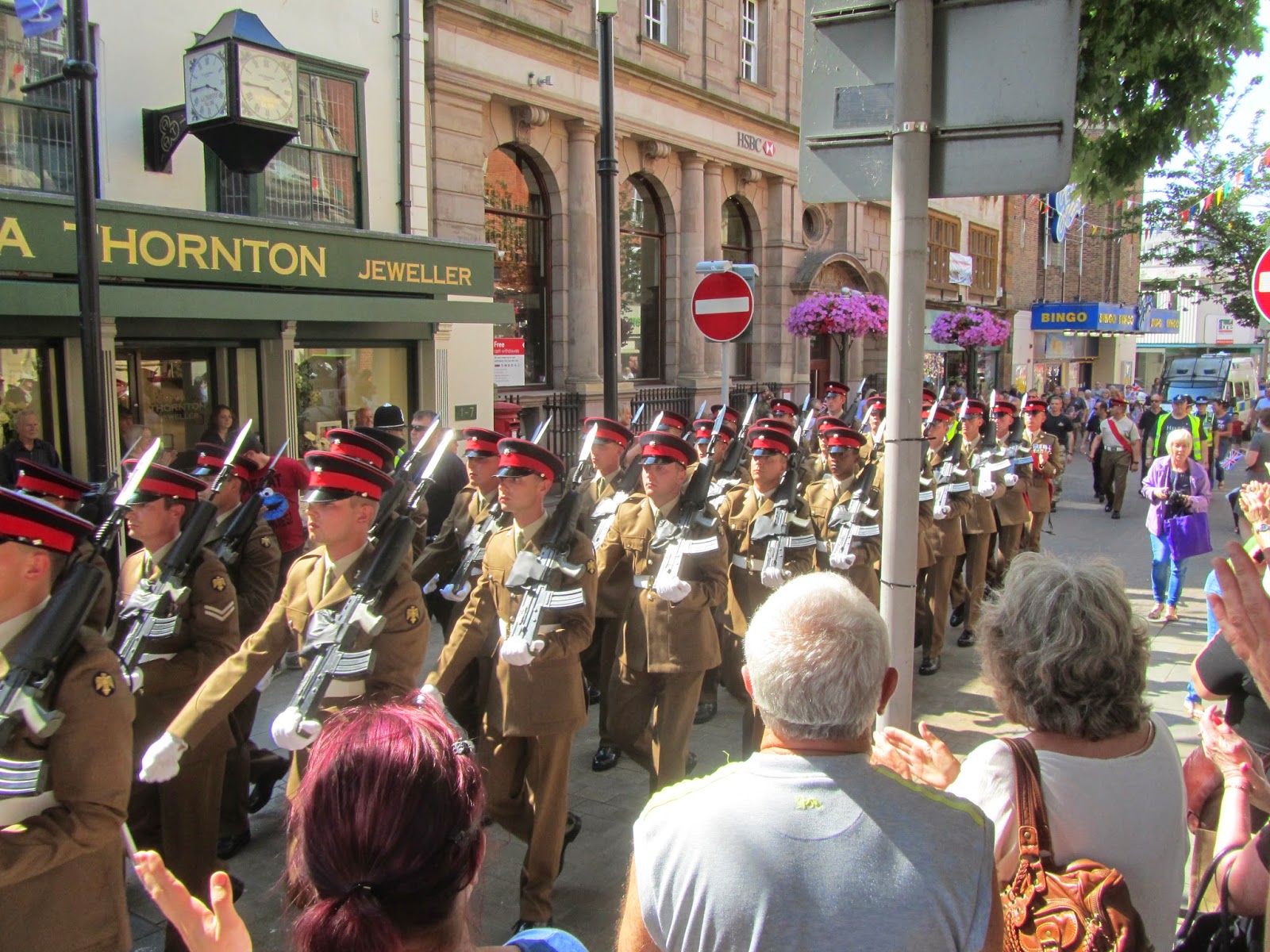 We are, of course, surrounded by First World War stuff at the moment and I'm glad, because we need reminding how awful it was. The Second World War, too, shouldn't be forgotten. However, I have a problem with treating regular soldiers as heroes.

As far as I'm aware, no one is forced to join the army these days. If you sign up, you do so in the full knowledge that, notwithstanding the fabulous opportunities for training, travel, camaraderie and personal growth, there is a chance you will get shot at at some point. Does this make you a hero? I wonder. This isn't to say that there aren't individual acts of heroism, where a member of the armed forces will take a huge risk to rescue a civilian or a colleague. That's different, though.

I've had a quick look on the MOD website, and the starting salary for a regular solider is in the region of £18,000. That's quite a lot; but if you don't think it's worth everything that being in the army involves, don't sign up. Compare this to the RNLI volunteers who risk their lives for strangers for no financial reward, and who have to be on call 24 hours a day, seven days a week. Which is the more heroic?
Posted by Julia Thorley at 19:12 No comments:

On with the show

'Celebrate the small things' is a bloghop instigated by VikLit on her blog Scribblings of an Aspiring Author and co-hosted by Diana Wilder, LG Keltner @ Writing Off the Edge, Cyborg Mom (Katie) and CaffeMaggieato @ mscoffeehouse. Details are here.
Posted by Julia Thorley at 08:30 6 comments:

Nature is a wonderful thing, but it's not all lovely. Take, for instance, the Ritual of the Flying Ants, which took place on Saturday. I know it's amazing that they all take off at the same time, but it gives me the creeps.
----
Yesterday afternoon I sat in the audience while the choir I belong to performed its summer concert. I wasn't in my usual seat in the alto ranks, because I've taken a term off. My only contribution was to arrange a bit of publicity and book a couple of folk singers to complement the programme. Vince Gorman and Dave Clemo did a splendid job. Check them out on YouTube.
----
The week has had an unusual start. I'm not a Buddhist, but have been to the occasional meditation session and special event at the local centre (which meets at the Quaker Meeting House, making it a truly interfaith event). They have a special guest all day today: a Tibetan Meditation Master Khenchen Lama Rinpoche. I went to the first teaching and really wished I could have stayed for the whole event, not least because there was to be something on Dream Yoga and I have no idea what that is. I shall have to ask for feedback from friends who were there. We did some lovely work with mudra (hand positions) and mantra (repetition of words) with a view to helping us overcome the Five Poisons. Khenchen Lama Rinpoche had a very strong Tibetan accent (it took me a while to work out that what I thought was 'zumba', which seemed a little odd, given the context, was actually 'example'), so I can't tell you what the five are, but he definitely mentioned ego (ahem), anger and envy. In Indian yoga we talk of the five obstacles (klesha) of ignorance, egoism, attachment, hatred and clinging to bodily life, and of course there's the Seven Deadly Sins. Many paths all leading the same way?

Oh, I do like to be beside the seaside!

I didn't join in with Celebrate The Small Things last week because I was having a weekend away in Norfolk. Hubby and I went to Cromer, which is a lovely, sleepy little town. Despite dire BBC Weather warnings about rain, we were very lucky. It was actually hot on Friday, and apart from a few showers on Saturday morning during which we were forced to retire for coffee and cake the rest of the weekend was OK, too. We walked on the pier, had an ice-cream, ate chips on a bench, viewed the lifeboat, lost £5 in the machines in the arcade and generally had a good old mooch. It was grand.

On the way home we popped into Sunny Hunny (that's Hunstanton), which was slightly less lovely. There was a lot of mess and litter on the beach and some very sad donkeys.
Anyway, I feel as though I've been playing catch-up all week. Goodness knows how people cope when they go away for a fortnight (I wish).

Another cause for celebration is that mum's poetry book has been launched at a church 'do' and is selling well. She has even been signing copies!

I'm having a quiet night in this evening with a bottle of wine and Season 5 of Breaking Bad. Ah, this is the life.

'Celebrate the small things' is a bloghop instigated by VikLit on her blog Scribblings of an Aspiring Author and co-hosted by Diana Wilder, LG Keltner @ Writing Off the Edge, Cyborg Mom (Katie) and CaffeMaggieato @ mscoffeehouse. Details are here.
Posted by Julia Thorley at 16:15 10 comments:

It's in my genes 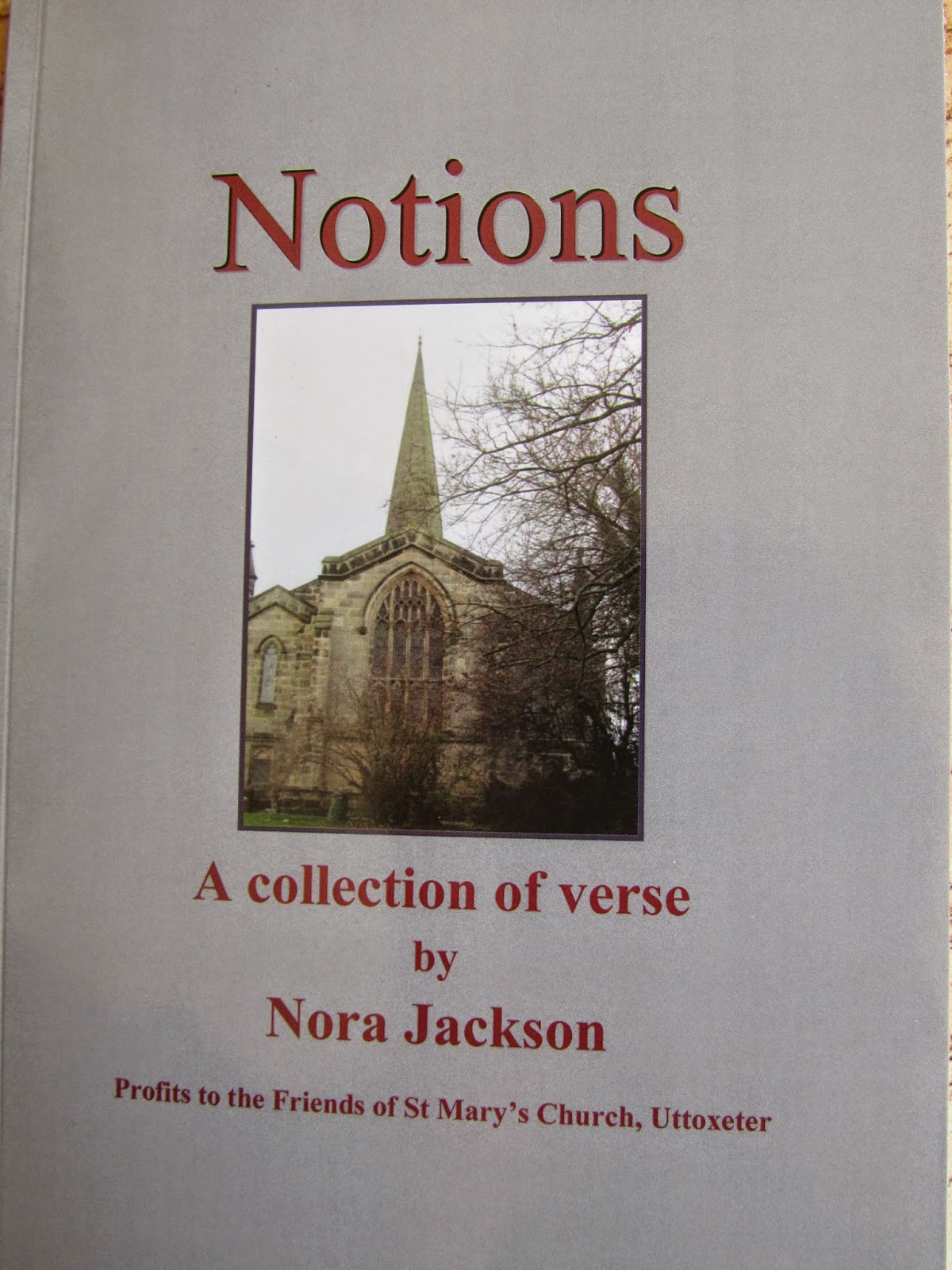 Whatever talent I have with words definitely comes from my mum's side of the family. My grandma would have been a teacher, had she not had to give up all such ambition to take care of her seven siblings; my uncle (mum's brother) was a successful short story writer and family legend has it that as a child he would sit and read the dictionary for fun.

Which brings me to my remarkable mother. She has taught me all I'll ever need to know about solving cryptic crosswords; she is a regular in the Daily Telegraph letters page; she is content supplier to the parish magazine; in short, she is the go-to gal if you need something written. At the moment, she has two main writing projects on the go: she is ghosting some memoirs for one friend, and transcribing some wartime diaries for another. As if that wasn't enough, she has just published a small volume of verses (she is adamant that she is NOT a poet).

Over the years, she has written various rhymes and verses for the aforementioned parish magazine and has now drawn them together into a book to raise money for the church. My friend Will Adams has helped with the publishing process, and we're all delighted with the result. Mum is in her 80s. I'm very proud of her.