I didn't manage to get around to posting a Celebrate The Small Things contribution last week, so I've tried extra hard today.
I hope that next week I shall be able to celebrate having taken part in a successful concert. It's the big night tomorrow, so excuse me while I go and run through the Brahms again. Why didn't I study German at school?

Join us in Celebrating the Small Things. This is a bloghop instigated by VikLit on her blog 'Scribblings of an Aspiring Author'. Details are here.

One other thing: if you'd like something to make you smile, read about 'guerilla poetry' in Waitrose here.
Posted by Julia Thorley at 12:29 16 comments:

Right tool for the job

We’ve had a new fence panel delivered. Clive and I manoeuvred it down the side of the house and propped it up against the wall while we considered the removal of the old one. When we moved into the house 15 years ago we installed a new fence the length of the garden, and had the foresight to have it housed in concrete posts and gravel boards. But time – and, it must be said, pigeons – has taken its toll and we are gradually replacing the panels one at a time.

The idea of concrete posts, of course, is that the each panel can simply be lifted out as necessary and another slotted it. However, that doesn’t allow for the involvement of tenacious ivy. So what we thought was going to be a simple five-minute job turned into a bit of a kerfuffle.

Fortunately our lovely neighbour was on hand. We’d only been out in the garden a few minutes when he appeared. ‘Need some help? Looks like you’ve got a job on.’ He’d obviously seen us struggling and no doubt heard the noise as, in true Julia style, I employed a well-aimed gardening boot in an attempt to loosen the bindings of the ivy. Our neighbour is one of those men who always has the right tool for the job, and in a trice he had produced not one, but two pick axes, which he and Clive were able to employ under the offending panel to encourage it upwards.

The replacement was duly installed, but it needed a bit of persuasion to drop level with the rest of the fence. By the time I’d trotted back to the house to find something suitable to use to whack it with, our neighbour had delved back into his den and produced a chunky lump hammer, which soon did the trick. 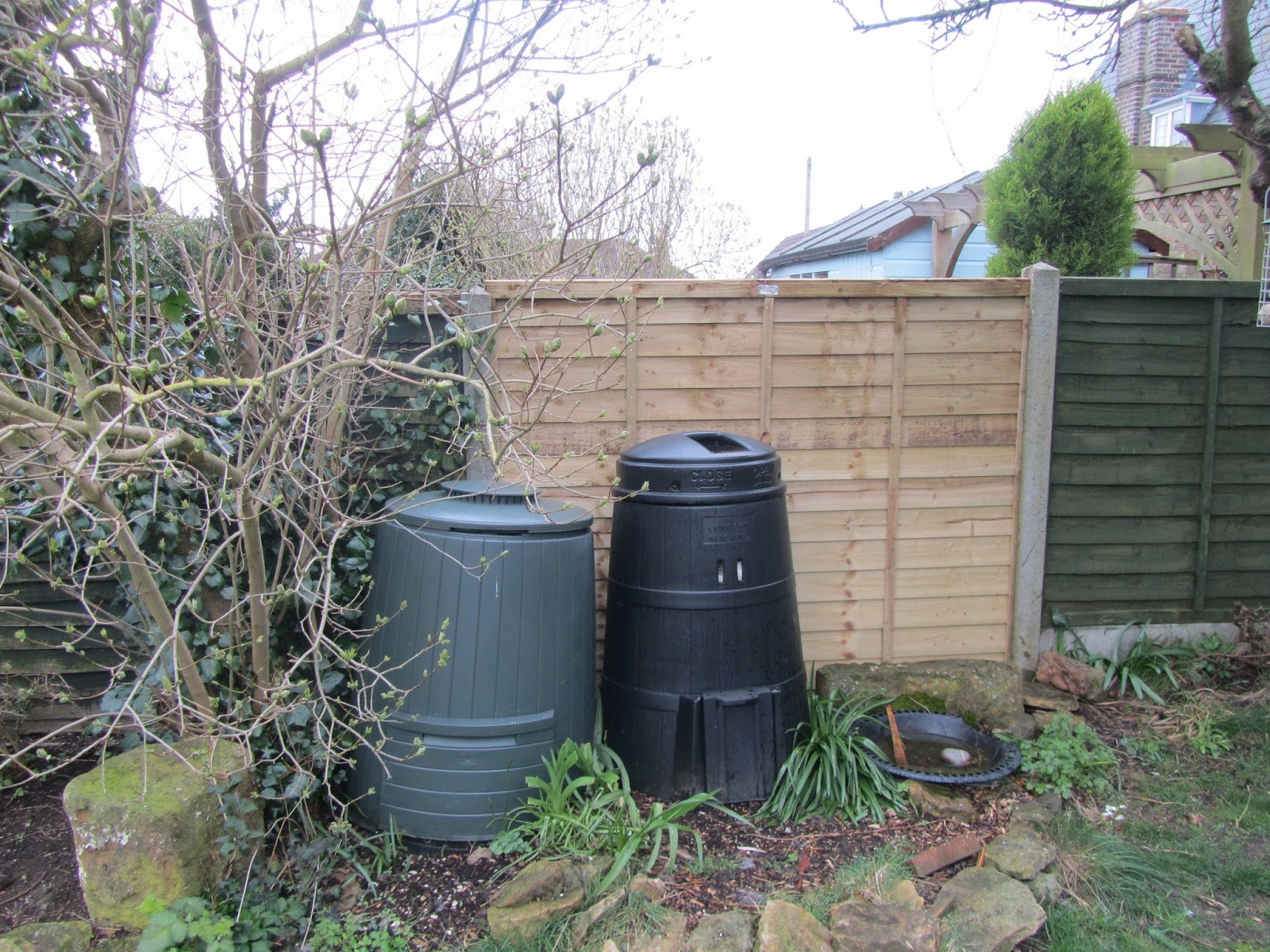 A couple of hours later, back inside, the Hoover started spitting out more than it was sucking in. I turned it upside-down and gave it a good rattle, for which I was rewarded with a flurry of dust and detritus. Clive was all for reaching for his socket set, but that seemed a bit drastic to me. Sadly, there was no neighbour on hand with his toolbox to help, but again, in true Julia style, I blundered in. You may laugh, but with a bit of poking about with a carving fork I managed to unclag the thing and normal service was resumed. It might not have been the right way, but it worked.
Posted by Julia Thorley at 16:20 3 comments: 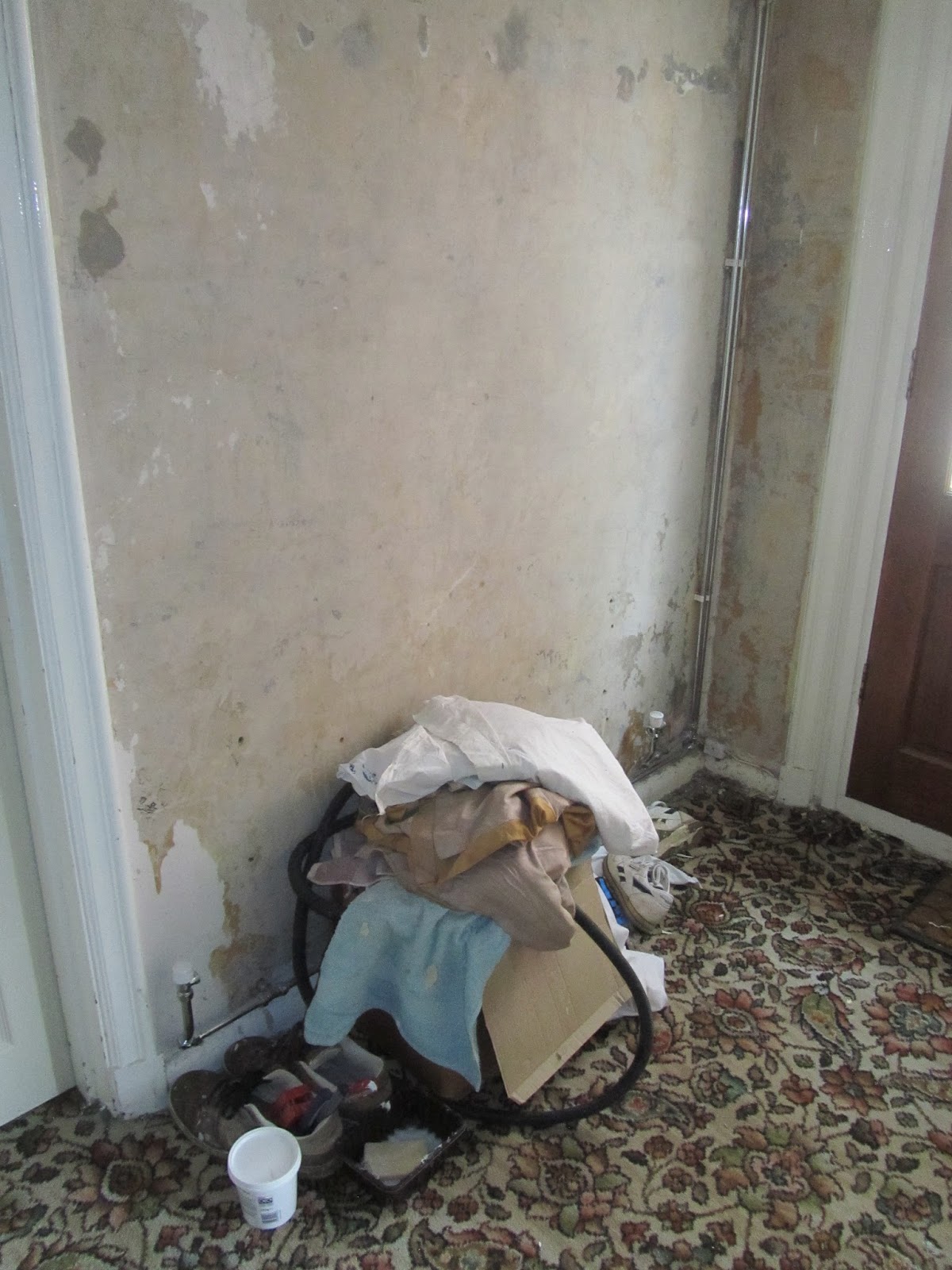 Just time for a couple of quick snippets this morning. That hallway's not going to decorate itself.

First check out this interesting post from Maria Godson here about the administrator as artist. List making as an art? Creative organising? Yes, please!


'Oh yes, they're on holiday in the Doldrums at the moment.'

'I was cold, so they wrapped me in a bidet.'

Back to the rubbing down.

Well, here we are again. Time to Celebrate the Small Things.

When I was driving to a nearby village this afternoon to teach my yoga class, as I turned round a corner a red kite flew up from the road right in front of me. It was an amazing sight - and to think that these birds were once endangered. They are more common than sparrows round our way. We often get them swooping over our suburban garden. I don't know what this particular bird had just had for its lunch, but it had left behind an enormous pile of feathers.

My son's band were on BBC Introducing again this week. The DJ (are they still called that?) said, 'We LOVE this song.' The song in question is 'Winnebago' and you can hear it here.

On the writing front, I submitted an article to someone on Monday and got an acceptance email this morning. Result!

Why not join us in Celebrating the Small Things? This is a bloghop instigated by VikLit on her blog 'Scribblings of an Aspiring Author'. Details are here.

Epic fail in the healthy eating stakes this weekend, when Number Two Son spat out my lovingly prepared Leek, Wensleydale and Pear Quiche, dismissing it as ‘rank’ and reaching for the freezer door in search of pizza. Some you win…

The leeks came from the allotment, where they had been successfully overwintered. At this time of year, the plot looks rather bleak. Most of it is covered with cardboard and old carpet where dormant beds lie waiting for spring sowing. The only stuff still being harvested, apart from the leeks, is Jerusalem artichokes. I have a theory that come the day when the world finally gives up on us, the cockroaches will have these tenacious vegetables to feast on. They are, like the bugs, indestructible. Note to self: four roots of Jerusalem artichokes is three too many.

An allotment is a great place to work on my mindfulness skills, because there is plenty to stimulate the senses. On my last trip, there was a particularly good challenge for my sense of smell, as the air was filled with the heady mix of cow muck and two-stroke, this latter from the trial bikes that hurtle up and down in an adjacent field.

Best treat for the sense of touch, though, is when I get home and clean my hands with warmed olive oil and sugar. Mmm.
Posted by Julia Thorley at 17:49 8 comments:

You see? I told you things would improve if we could simply grit our teeth and get through February.

March started well, with a trip to the Institute for Creative Leather Technologies at the University of Northampton. I made a cow (see pic)! 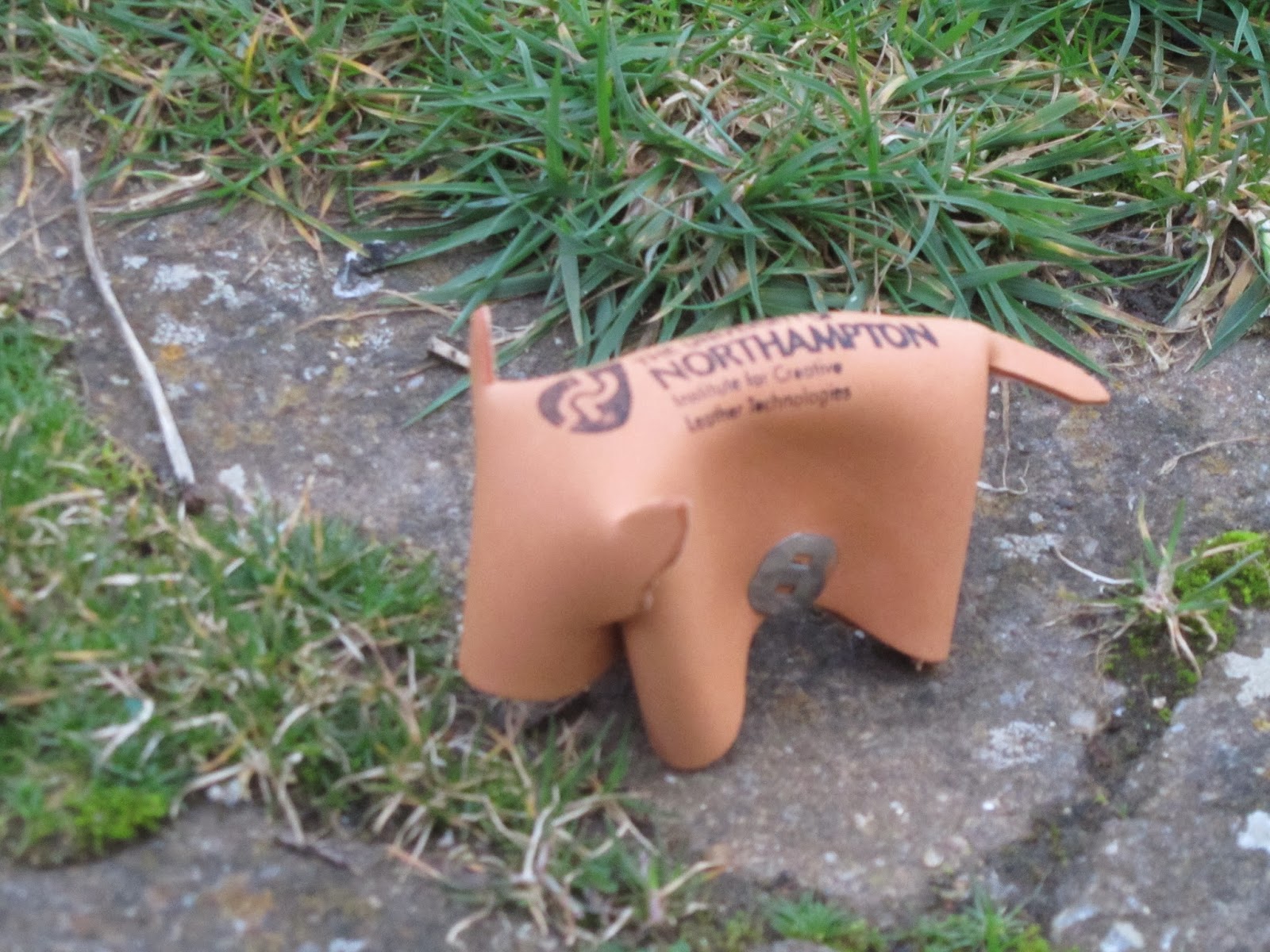 I've already had two comedy nights this month: Miles Jupp and Jack Whitehall (separate occasions; the two of them on one night would simply be too much posh-boy capering).

I've taught yoga to some lovely people, where this week we have done interesting things with our toes.

The electrician is booked for tomorrow morning.

Plenty of material for Celebrate The Small Things this week. This is a bloghop instigated by VikLit on her blog 'Scribblings of an Aspiring Author'. Details are here.

Have a lovely weekend.

Repeat after me: yoga is not a religion 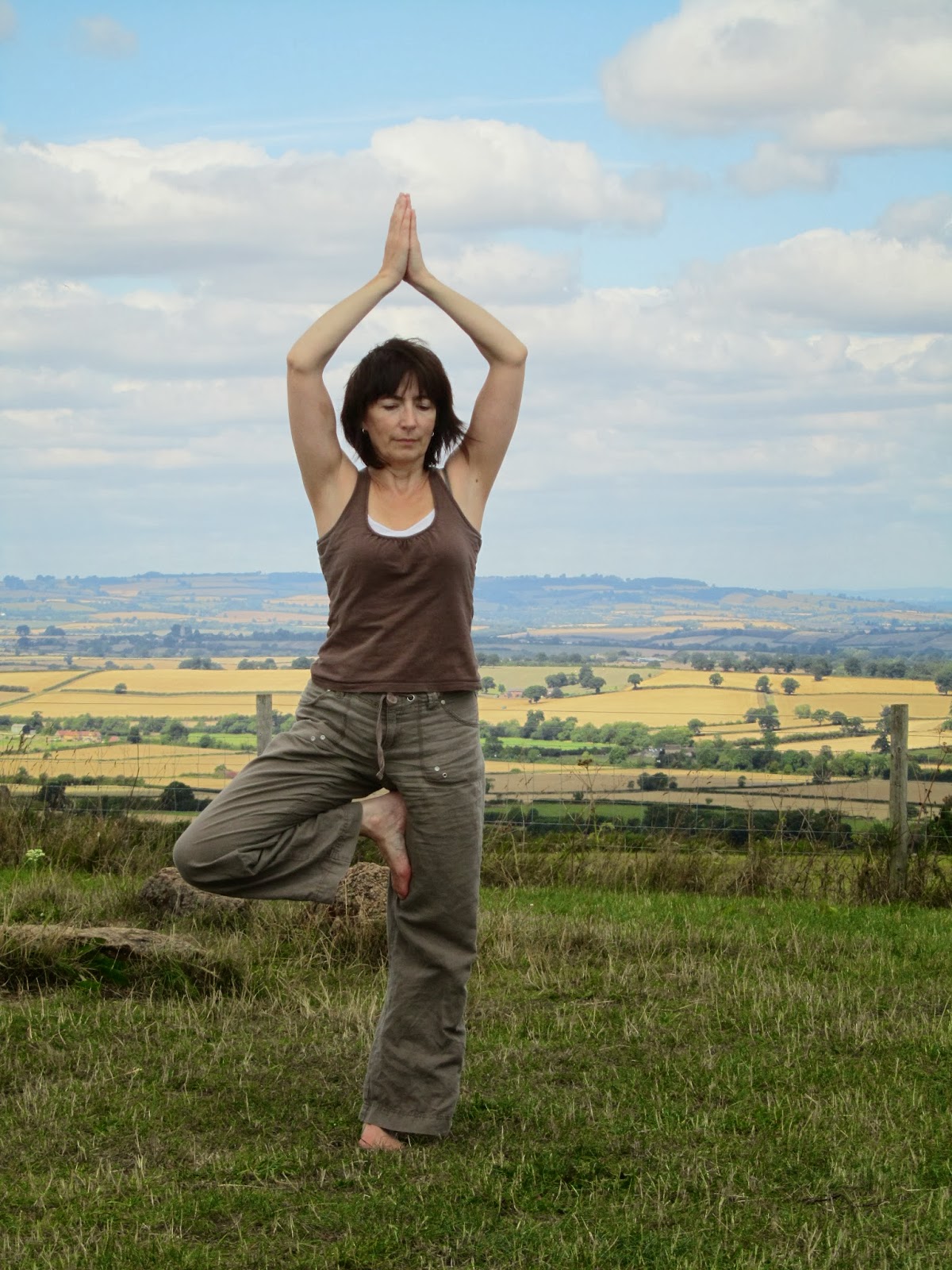 Most weeks before we begin our choir practice, our musical director invites me to run through a few yoga moves to get us warmed up physically before he takes us through our scales and so forth. This is simply five minutes of fun, accompanied by a chorus of huffing and puffing (mostly in jest!), but it fits the bill. We do some gentle stretches that open the ribcage and the spine to free up the lungs and the diaphragm. Good breathing is an essential part of yoga and singing, so it seems appropriate that I should do this.

A few weeks ago, one of our number brought a friend along to see if he would like to join us. He happened to be there on one of the weeks when I was putting the choir through their yogic paces. He hasn't been back. I have since learnt that one of the reasons is that as an Evangelical Christian he found the incorporation of yoga unacceptable.

That seems a shame. Stifling the urge to use the words 'blinkered' and 'ill-informed bigot', I tried to explain to the person who had originally brought this stranger into our midst that yoga isn't a religion - and even it it were, all we do is a bit of stretching. I don't ask them to chant to Shiva! What kind of a faith is it that breeds such intolerance in one of its followers that it causes him to pass up the chance to sing?