On Monday evening, I went to a session on mindfulness led by the lovely Sarah Fereday from rainbowbutterflywings.com. One of the many simple ways she suggested bringing ourselves into the moment was literally to stop and smell the flowers. She gave the example of some beautiful yellow roses she had passed on her way to work that brightened her journey (and took her mind off an impending dull meeting).

With that in mind, today's Celebrate the Small Things is focused on the lovely flowers in my garden. 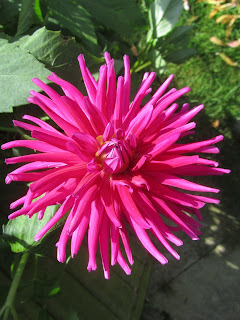 At the moment I have a supply of self-set sweetpeas that come back year after year. I don't get many blooms off them, but hey: they're free! We also have some glorious dahlias, bought on a whim from Wilkinsons. We didn't know what colours they were going to be, so I'm delighted that one of them is a vibrant purple/pink: my favourite.

And in an uncharacteristically creative moment, I've potted up a fuchsia and a trailing something in an old teacup! 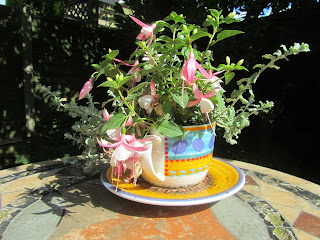 I'm taking a couple of weeks off from tomorrow. Well, not a complete break, because I'm self-employed and therefore permanently anxious. However, my online presence might be reduced.

Have a lovely weekend folks, and I'll be back soon.
Posted by Julia Thorley at 15:41 8 comments:

Making the most of a lit fest

Everyone has their own plan of attack when they go to a literary festival (or any other festival, for that matter). This is what works for me. 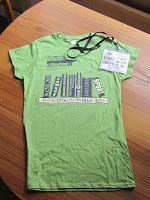 Have I missed anything?
Posted by Julia Thorley at 08:15 6 comments:

Something to celebrate (up to a point)

It seems that the harvest has begun in earnest. This is obviously a cause for celebration, but it is also a signal to roll up my sleeves and pretend I'm a housewife. Back in early spring, I was allowed to help put the netting over our fruit bushes. We've had too many seasons when they've gone from 'nearly ready' to 'ravaged by the birds' overnight. I don't know, then, why I was surprised when Himself fetched up in the kitchen on  Sunday afternoon with pounds and pounds of blackcurrants and redcurrants.

'Lovely,' I said. 'I was wondering what to do this week.'

Since life is too short to take off all the nibbly little stalks to make proper jam, I've opted for jelly, which took care of about 6lb of fruit. That's plenty, given that while clearing a space for the jars I discovered some of last year's preserves that we still haven't eaten.

We've eaten some of the new crop just as they were, cooked down and stirred into Greek yoghurt (and, yes, served with ice-cream, too). The rest are now bubbling away enthusiastically in demijohns on their way to becoming wine. They are in the corner of my 'office', making a reassuring bloop-bloop-bloop.

We've started digging up potatoes, as well, and onions and garlic are hanging in the shed to dry. Any minute now we shall be gathering courgettes and beans, and the tomatoes won't be far behind. Lovely stuff!

Could you be Birmingham's next Poet Laureate?

Well, no, I couldn't - but could you? I've received the following from Writing West Midlands.

We’re working with Library of Birmingham to find two talented poets to become Birmingham’s next Poet Laureate and Young Poet Laureate. No formal qualifications are required. If you have the gift of poetry, share it with us. If you live, work or study in Birmingham, you can apply for these honorary posts. You have until 12 August 2016 to submit your application.
The two-year role has a small budget to commission poems and fund activities. This might include writing poems to commission, performing poetry, running workshops, getting involved in cultural events and working with the city’s many poets and poetry groups.
To apply, candidates must submit two poems – including one about Birmingham - along with a personal statement outlining what they would like to achieve with the role.

There is more information at: www.libraryofbirmingham.com/poetry
Posted by Julia Thorley at 14:08 2 comments:

I had an excellent day out yesterday when I went to Birmingham for the National Writers' Conference organised by Writing West Midlands. I joined about 100 other delegates for speeches and panels and networking and mingling. I took reams and reams of notes and came home with my head buzzing with ideas - so many plans! I can't tell you everything that went on (some things we were told to keep secret!), but here is a brief taster.

Writing for broadcast was a four-person panel: Helen Cross, Radio 4; William Gallagher, Writers Guild; writer, performer and producer Simon Hickson (remember Trev and Simon from Saturday morning TV? Yes, that Simon Hickson); and Clare Eden, producer. From this I learned that there's no money in podcasting for most people, and there's no point in submitting topical or anniversary-based dramas to the Beeb, because they will have it covered by commissions ages before the event.

In Taking the plunge - career change for writers novelists Kit de Waal and Nadim Safdar told us how they had given up their day jobs (she a lawyer, he a dentist) to focus full time on writing. What struck me about both of them was that despite their protestations to the contrary, they seem to have found the transition easy because they had a plump financial cushion beneath them. Not so the rest of us!

In complete contrast, the first thing novelist Paul McVeigh told us in A writer's career - keeping your options open, was 'Don't give up your day job.' This session alone justified the entrance fee for me. He was fabulous - lively, refreshing, charming, and a bit brutal. Did you know that the average advance for a first-time novel is £1,000? That's the average: most people get less. Take out the agent's commission and tax, and you can see you're not going to get fat on what's left. He did, however, have some tips on how to make the most of your time to boost your earnings - e.g. raising your profile now so you'll be ready when your (next) book comes out.

Final keynote speaker was children's author Bali Rai, who spoke passionately about the lack of diversity in the British publishing industry. Thought-provoking stuff, especially as I'm one of the white middle-class people he railed against.

All in all, a very good day. Next up in the region is the Birmingham Literature Festival, which runs 6-16 October. See you there?

The spice of life 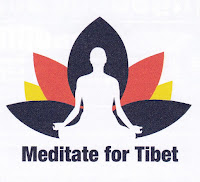 Mixing things up a bit this week. Monday was a mixture of yoga and editing, as usual, but then in the evening I went to the Friends Meeting House in town for a fundraising event for the Tibet Relief Fund organised by the Northants Buddhists (multi-faith indeed!). We did some Tai Chi and Qi-Gong (which was VERY strange - in a good way) and a little yoga. Then we had a talk followed by meditation. It was a peaceful evening.

In complete contrast, I went to visit an engeering firm this morning to glean some information so that I can write some website copy. It was a proper grimy place and the desk in the 'office' was littered with peculiar-looking lumps of metal. I was quite happy - I love the smell of workmen - and I now know what it means to spark erode broken taps, which I'm sure will come in useful one day. The premises are tucked away in the far corner of one of Corby's industrial estates, where all sorts of businesses make a living: there's a crisp factory, a breakfast cereral manufacturer, body shops, workshops, IT businesses, kitchen-makers: you name, there's probably one there. Hm. I smell a sitcom!

Tomorrow I'm going to the launch of 'Our Woods', a festival of events to celebrate the woodlands of Corby through song, dance and light that will run from September to next May. Then I'll be dashing off to ukulele practice.

Celebrate the small things - back under control

I'm finally starting to feel as though things are coming back under control. My workload has eased off a bit, so I'm no longer running just to stand still. My mood was lifted considerably on Monday by a fabulous Indian head massage by Sarah of Rainbow Butterfly Wings. Bliss!

Tuesday was super-busy, because I taught three yoga classes and somehow forgot to eat, so I was a bit wobbly towards the end of the day; but a good talking to by a friend put me right and I was back on an even keel on Wednesday. The rest of the week has gone pretty well. I've done lots of work, including another article for Smallholder, and set up a meeting with a chap to talk about my writing some copy for his website; and there's been plenty of editing and proofreading, too.

I don't know what the weekend will bring, but I hope to spend some time outside to clear away more cobwebs.


Celebrate the Small Things  is a blog hop. Visit Lexa's Blog for the rules, and then post every Friday about something you're grateful  for that week. Originated by VikLit) and co-hosted by L.G. Keltner @ Writing Off The Edge and Tonja Drecker @ Kidbits Blog. 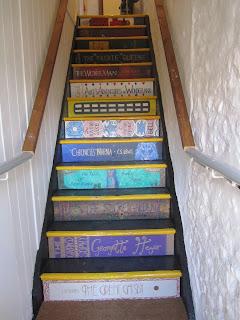 I'm still up to my neck in stuff, but I wanted to drop you all a quick line in case I disappear again.

I sent a book submission to a publisher last week and was pleased to get a reply almost straight away; so often submissions seem simply to disappear into the ether. It wasn't good news insofar as my book wasn't what they were looking for. However, they did offer me the chance to join their team of freelance editors. Result!

Elsewhere, I have had a story accepted by Ireland's Own, which is pleasing.

It has been KettFest this weekend, the appalling name for a burgeoning arts festival here in Kettering (and if you don't know where that is, ask Lindsay Lohan). I bumped into a local author who has recently launched a small publishing company and we are going to get together to talk about future projects. Watch this space.

Naturally, one of the venues for events was our lovely independent bookshop Not Just Words. The shop is on the first floor of a  little complex of outlets and the risers on the stairs have been painted (by customers) to look like book spines. My picture doesn't do them justice, but aren't they lovely?
Posted by Julia Thorley at 15:31 4 comments: