If this is style, you can keep it 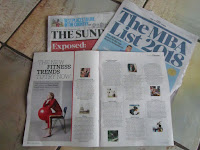 I don't why I put myself through it. I mean, I know the Sunday supplements are based on pure fantasy and, as the League of Gentlemen would tell me, 'There's nothing for you here.' The thing is, though, every now and then I have a lazy Sunday in prospect and find myself thinking that what I really need is a copy of The Sunday Times, with a crossword I have no hope of completing, several sections that go straight in the recycling basket (today's gem: The MBA List 2018) and the chance to be patronised by the fashion police.

Today, then, in spite of my better judgement, I browsed the glossy little add-on that is STYLE (note the block caps). Brace yourselves.

Page 7 has the STYLE Barometer, where I read that 'heating up' is Noisy Yoga: 'Forget candles and breathing, the next gen [sic] of yoga classes encourages whooping and vocalisations.'  Forget breathing? Really? My teeth start grinding.

Skipping quickly over the the double-page spread telling me what to wear with a jumpsuit, I arrive at a feature on 'THE NEW FITNESS TRENDS TO TRY NOW'. (More block caps.) The whole article is full of the most pungent BS, but two snippets take me from raised hackle status to full-on spitting with rage mode.
I bet you can.

It's the end of the world as we know it!


This is one of the headlines on the BBC front page this morning, scaremongering on the back of stories about soaring temperatures. Oh, for goodness' sake!

OK, so this report is actually about what the future might hold, should heatwaves become a regular feature; but I'm sure you've seen the stories in the press about how dangerous all this weather is. Yes, I know it's very hot and I know we're all a bit sweaty and starting to flag, but honestly! What is it with the British? We're never happier than when we're miserable.

Obviously, some parts of the world are suffering because of the unusual weather and that's awful, but for most of us in the UK it's all just a bit bewildering. We don't have the right clothes or attitude for all this sun.  I know there are some who are at risk - the elderly, the very young and those with trouble breathing at the best of times, for instance - but shouldn't we be making the most of this lovely weather? Put on some sunscreen, buy a floppy hat, sit in the shade, strut with a parasol, but try to enjoy it while it's here, because it won't be long before we're scraping the ice off the windscreen and worrying about burst pipes and people slipping over in the high street.

On a pedantic note, may I take issue with the use of the word 'thanks' in this quote from the BBC story?

'But all agree that future heatwaves will be hotter and more frequent thanks to carbon emissions.'

Have a lovely day, folks - but be careful out there.

* In case you think I've been wasting water, let me assure you that my sweetpeas, pictured, continue to thrive because I've been emptying the washing-up bowl into their pot. 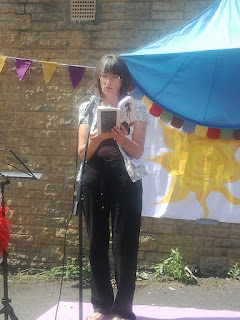 Every town in the land seems to be having a festival these days, and dear old Kettering is no exception. This year's KettFest was blessed with glorious weather (obviously), but could have done with a bit more publicity, and sooner. Nevertheless, a good time was had by all.

I played my part. I hosted a creative writing event in the town library at which people were invited to drop in and create a character based on the prompts I had provided. This was great fun and there were some lovely - and surprising - words written. Then I dashed around the corner to take part in a spoken word event, where I read out a story from Nine Lives and a short piece from Stripped-back Yoga. There were people taking part not just from the town, but also further afield, and organiser Kezzabelle (who took this pic of me) did a great job of coordinating it all.

My turn went down well, but I could definitely do with a bit more practice with a mic. Part of the  problem was that there was no monitor, so I couldn't hear myself through the PA, but the bigger problem was that I found it hard to stay close enough to the stand.

Anyone got any tips for me?
Posted by Julia Thorley at 15:44 8 comments: 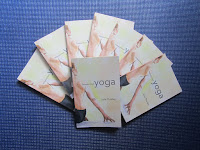 It's finally arrived. Today is the day that Stripped-back Yoga is released into the wild. This evening, I'm having a launch event at Rushton Hall, which is one of the venues where I teach; then a week on Saturday I'm holding a one-off class at the place where I held my very first proper class. To say I'm excited is an understatement! My yoga friend Angela has just rung to reassure me it's all going to be all right and I must remember to breathe.

However, it's also a regular working day, and I have two classes to teach and an issue of Logistics & Transport Focus to proofread. Must dash.


About the book
Stripped-back Yoga is a collection of my thoughts about yoga to be dipped in and out of when you have a couple of minutes to spare. Some of the pieces are about practical aspects, but it's not a 'how to do yoga' book. Much of it is simply my opinion and observations, so I hope it will appeal to those who practise yoga and those who don't.

At £7.99, it will be available from my website www.juliathorley.com and from www.3ppublishing.co.uk/bookshop, as well as from Amazon's Kindle store.

'Schmooze: to chat in a friendly or intimate manner, especially at a social gathering'

Yes, that covers it; that's what I've been doing recently. I can't really call it networking, because that sounds very businesslike and professional, when what I've actually been doing is drinking wine with arty types at various locations around the county.

On Friday evening, for instance, I was at a book launch for Silencing Anna by Sadie Mitchell, a local author I met at a social evening run by the publisher who is handling my yoga book. (Get you, missus!) This is the first book by this author, but I'm sure it won't be the last, It's a disturbing psychological thriller - and if I tell you the blurb includes the killer line:

'Only Anna knows the truth, but Anna cannot speak'
I'm sure you'll want to rush out and buy a copy.

It was a lovely evening (gin van available, for those that way inclined), with a good turnout and lots of convivial chat and,  most importantly, a queue to pay for a copy of the book.

Silencing Anna is available from Amazon  or direct from the publisher.
Posted by Julia Thorley at 11:46 4 comments: