If you don't mind which way up your scone is... 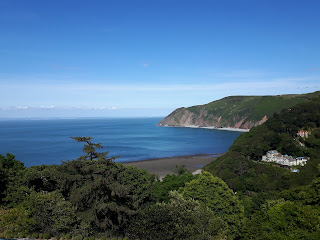 ...why would you go to Cornwall when you could have Devon?

Mr T and I have been been to Lynton and Lynmouth for a week. Boy, it's beautiful. We rented a small flat in what had been Lynton Cottage, a former hotel, right on top of the hill overlooking the bay. Our flat was called the C S Lewis Balcony.  In 1925, he visited on a walk from nearby Brendon and had lunch there, declaring, 'The view from the balcony was beyond everything I have seen.' I have to agree: the pic here shows the view from our window. The rather tenuous link with the writer is also commemorated in the splendid lobby, where the quote is reproduced on a plaque that cleverly reflects the view. 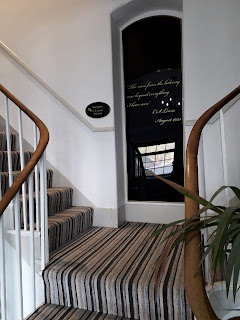 There are other claims to literary fame. The cliff railway that connects the two villages was financed by Sir George Newnes, publisher of, amongst others, Titbits and The Strand Magazine; the Coleridge Way travels along the coast here 'in the Footsteps of the Romantic Poets', according to the promotional leaflet; it was from Lynmouth that Shelley and his wife and sister-in-law fled by boat to Wales, commemorated in the Shelley Hotel; and along the steep footpath that offers an alternative to the rail link there is a Poets Walk decorated with verses written by local people.

Despite having walked about 50 miles during our stay, I feel rested and restored. Even the M5 closure that impeded our progress home didn't spoil my serene mood. Tips on keeping it are welcome. 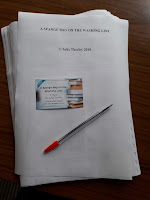 Thanks to everyone who came along to Buck Lit Fest last weekend. I met some lovely people, did some quality networking and didn't make a mess of my talk. I'm chalking it up as a successful outing.

The shine was slightly taken off my joy when I got home to find Mr Thorley had done himself a mischief up at the allotment, necessitating a trip to A&E and 13 stitches in his leg. I'll spare you the details.

Thanks, too, to those of you who took the hint and are now following me on Twitter (@JThorleyAuthor). If I haven't followed you back, feel free to give me a nudge. I haven't quite got the hang of it yet.

Big news on the writing front is that A Sparge Bag on the Washing Line is back from my reader, so now it's time for me to reread the whole thing again and see what comments he's made. I'm also grappling with the cover design. I shall get a professional to create it, but I need to find a picture, or at least come up with a prompt that someone can sketch for me.

Have a lovely weekend, folks.

Email ThisBlogThis!Share to TwitterShare to FacebookShare to Pinterest
Labels: A Sparge Bag on the Washing Line, Buckingham Literary Festival

Just a quick one, missus 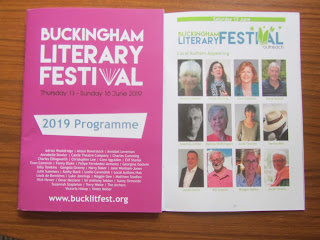 I'm rushing around like a fly with a blue bottom today, but I just wanted to tell you that I shall be at the Buckingham Lit Fest all day tomorrow (Saturday). I'll be hanging around in the Writers' Hub, and at 3.15 I'm doing a pop-up talk on pitching non-fiction. If you're planning to be there, please come and say hello.

That was the week that was

It's been a White Rabbit of a week: no time, no time! There's been lots of bread-and-butter editorial work to plough through, in addition to:

This morning, I'm catching up on housework and putting stuff back in the right place. This afternoon, my son's band has a pub gig, at which I shall be discreetly cheering from the back. Tonight: nothing!

All this has been going on while Mr Thorley was off on an archaeological dig, excavating a Roman cemetery. He's had the time of his life and found some lovely bits of pottery. Oh, and a leg bone.

What will next week bring?

*About Concerto: After pianist Paul Wittgenstein lost his right arm during the First World War, he commissioned Ravel to write him a concerto for the left hand. At the same moment, assassin Gavrilo Princip was in prison, his withered arm tied up with piano wire. Unravelling narratives such as these surround this music's composition, and together they weave a true story that spans 100 years. Created by Michael Pinchbeck (who was with us in Corby), Concerto is a deconstructed and re-orchestrated exploration of the legacy of war and the healing power of music to overcome tragedy. It was a privilege to be in the 'vocal and physical orchestra' for this extraordinary performance, which finished with Nicholas McCarthy (born without a right hand) playing Ravel's Concerto for the Left Hand in D Major, written for Wittgenstein. 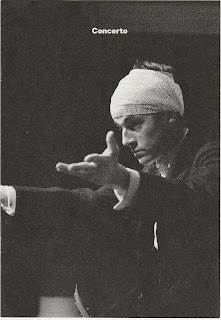 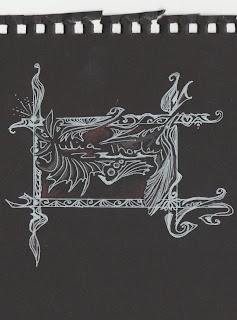 I  know some very talented people, and one such is artist, writer and all-round creative soul Pamula Furness. A while ago, she drew a lovely picture to go with my short story The Harmonium's Last Chord.

Now she is working in a way I've never seen anyone else do. If you write your name on a piece of paper, she can turn it into a wonderful piece of art. Just look what she did with my signature. In fact, you have to look very closely to see my name at all. I think it would make a rather splendid book plate.

If you would like to see what she can do with your name - or perhaps you'd like someone else's name turned into a unique gift - Pamula is on Facebook; if you'd like to get in touch but can't find her, just let me know.
Posted by Julia Thorley at 12:40 5 comments: