Welcome to Friday's post and the opportunity to Celebrate the Small Things. It's been a busy but enjoyable week.

In addition to my usual yoga classes, I led another a meditation centre at the Not Just Words bookshop, which was lovely to do. We have another couple of dates pencilled in for later in the year.

On the editorial front, I went to Nottingham on Wednesday to meet the rest of the team of one of the magazines I'm subbing for. Highlight of the day was being introduced to the term 'speedbumps for the eyes' to describe unnecessary punctuation.

There's been success, too, on the creative writing front, with my entry to the Senior Travel Expert comp being announced as joint winner. It will be published on their website in due course.

And that's my week. How about you?

Another busy week ahead 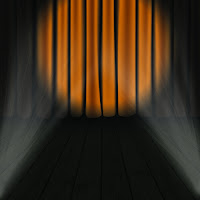 As another Monday morning dawns, I'm pleased to note that my New Year enthusiasm shows no signs of fading. I have a head full of ideas for stories and projects. However, I'm also extremely busy with proper, paying work, so for now I'm having to content myself with jotting down some notes 'for later'. I've heard that I'm on another competition short list, which is exciting, so perhaps that's adding to the creative flow.

One opportunity that has caught my eye, courtesy of Writers Online, is a competition to write a 40-minute dramatic monologue. The winning entry will be performed at the Octagon Theatre, Bolton, with a professional cast (though a chunk of money would be nice, too!). I do love a monologue, so I might have a go at this: but how many words is 40 minutes' worth? I've just read out a 1200-word story in seven minutes, but this doesn't allow for dramatic pauses - and I do have a tendency to gabble. What do you reckon: about 6,000 words?

If you fancy having a go, details are here:

OK, so the thing I nearly celebrated on Friday but then didn't in case I jinxed it is as follows.

Dermot O'Leary has a slot on his Saturday afternoon show on Radio 2 called 'Some Mothers Do Indie', during which proud mums can have a chat about their child's musical career and aspirations, and then he plays one of their songs. Well, yesterday I was that mum.

I was incredibly nervous, but had a lovely conversation with Dermot, during which he said some great things about my boy and his music. Then he played 'North Slightly East', which is the first track on their new EP. It's all been very exciting, and there's already been some great positive feedback.

I'd been briefed by the producer (my new best friend, Ben) that Dermot would ask me about my plans for the evening, which is how come I was ready with the details of my planned evening at Kettering Arts Centre's monthly comedy club, Rolling in the Aisles. Anyway, during the comedy show, the compere asked who it was who'd mentioned the club on the radio and people who knew pointed at me, so I had to fess up and raise my hand. He thanked me for promoting the arts centre on air, and reciprocated by giving Ivory Yardsale another plug, which was kind of him. Quite a day, one way or another.
Posted by Julia Thorley at 13:34 9 comments:

I heard someone on the radio say that we are officially halfway through winter today, and this on the first day I've had to scrape the ice off my car. It was a tad slippy on the back roads this morning, but we've had no proper snow here, thank goodness. Definitely something to celebrate.

Main celebrations this week must be the life and works of Messrs Bowie and Rickman. It's all been said elsewhere.

Closer to home, I'm celebrating the release of my son's band's new EP called 'A Watch on Each Wrist'. I'm very proud of him (natch). If you have a moment, pop over to Soundcloud here and have a listen and if you like it click the appropriate button. (If you don't like it, please just leave quietly.) Better still, if you have £3 to spare, you can buy it from Bandcamp here.

There is some other exciting Ivory Yardsale news, too, but I'm scared to say what in case I jinx it. If it comes off, I'll tell you next week.

And on that bombshell...

Over the weekend, I turned to the trusty i-Player to watch Sue Bourne's fascinating documentary The Age of Loneliness. I heard an interview with Ms Bourne on Bernie Keith's show on BBC Northampton, else it's not really the sort of programme I would watch. I'm glad I tuned in.

I'm generally quite happy with my own company, but there is a world of difference between solitude (a good thing) and loneliness (most definitely not a good thing). There have been times when I've felt a touch isolated, such as when I first left home all those years ago, when I've started a new job or been somewhere everyone knows someone except me; but they have been fleeting and manageable, and I'm blessed in that I've never been properly lonely. However, if this programme is to be believed, it's only a matter of time.

It seems to me that one thing we can do to help ourselves is to be involved with as many different groups as possible. Some of the saddest stories in the programme were of those long-married couples where one spouse has died and the remaining partner has looked up to find she or he has no friends. Devotion is wonderful, but only doing things as a couple is always going to end badly. The same is true where a partnership breaks down and one person moves on. If friends have only ever been joint friends of the couple, rather than the individuals, it's bound to be tricky when the dynamic changes.

Obviously I'm no expert, but may I urge you all to embrace contacts and friendships wherever you find them? Spread your wings. I'm not saying everyone you meet will become a bosom buddy, but living a closed-off existence is storing up trouble. (That said, I appreciate that crippling shyness and mental illness bring their own issues, also touched on by Sue Bourne.)

The other point that came across is that busy people can still be lonely. So if you know someone who lives alone, even if they seem to be quite content, it can't hurt to ask them in for a cup of tea once in a while.
Posted by Julia Thorley at 17:21 4 comments:

Welcome to this week's celebratory post, an opportunity to find something good to share with you all. There has definitely been a positive vibe in the air this week. Whether it is just post-Christmas glow or something more mysterious or ethereal I wouldn't like to say, but several people have told me they are feeling unusually optimistic about the coming year. I'll drink to that - and I can do, because I'm not doing Dry January this time. Well done you, if you've signed 'the pledge'.

Here, then, are my particular celebrations.
Have a good weekend, folks.

Celebrate the Small Things  is a blog hop. Visit Lexa's Blog for the rules, and then post every Friday about something you're grateful  for that week. Originated by VikLit) and co-hosted by L.G. Keltner @ Writing Off The Edge and Tonja Drecker @ Kidbits Blog.
Posted by Julia Thorley at 16:57 8 comments: 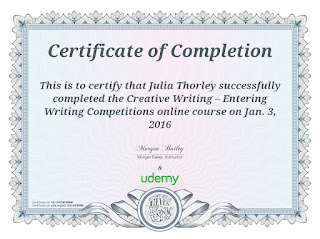 The decorations are down and we have eaten up the orts, save for the last few chocolates, which are currently being despatched by number two son and his girlfriend. The post-Christmas jigsaw is ready on the dining table. Order has been restored.

I've posted on my other blog (Yoga? Here's what I'm thinking) my reasons for not setting myself any New Year resolutions. Why set myself up to fail? However, I am going to try to lead a more considered life this year, by which I mean living a bit more mindfully (and I use the word here in the general sense of paying attention, rather than simply doing stuff on automatic pilot). Whether I shall be able to wean myself  off eating my lunch in front of the TV remains to be seen.

However, I'm absolutely determined to write more short stories this year. I have spent some time today working through Morgen Bailey's online course Entering Writing Competitions, so there should be no stopping me!
Posted by Julia Thorley at 16:40 4 comments: