A pagan friend sent me this greeting today. Lammas Day is an old feast-day celebrating the first fruits of the harvest. According to Wikipedia:

'On this day it was customary to bring to church a loaf made from the new crop, which began to be harvested at Lammastide. The loaf was blessed, and in Anglo-Saxon England it might be employed afterwards to work magic. A book of Anglo-Saxon charms directed that the lammas bread be broken into four bits, which were to be placed at the four corners of the barn, to protect the garnered grain. In many parts of England, tenants were bound to present freshly harvested wheat to their landlords on or before the first day of August. In the Anglo-Saxon Chronicle, where it is referred to regularly, it is called 'the feast of first fruits'. The blessing of first fruits was performed annually in both the Eastern and Western Churches on the first or the sixth of August (the latter being the feast of the Transfiguration of Christ).' 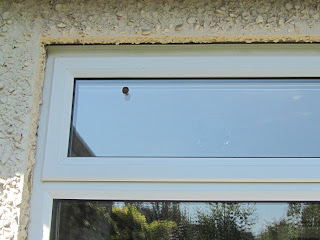 This is not the best pic I've ever posted, but that black splodge is a snail that has spent the day crawling up the window of my office. It is now about 7ft above the ground. I wonder where it thinks it's going?
***