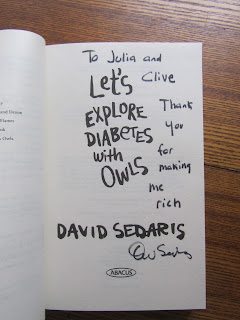 The weekend had a splendid finale. Husband, son Sam and I went to spend 'An Evening with David Sedaris' at the Derngate in Northampton and it was everything I hoped it would be. I'm a huge admirer of his writing and always tune in when he's on the radio (there's a new Radio 4 series on its way, apparently), but this was the first time I'd seen/heard him in real life.

He read several of his essays and I noted with ridiculous pleasure that he read from paper - I know! - and held a pencil throughout, occasionally making quick notes as he went. He told us that whenever he's performed  and no matter how often he's read a piece, afterwards he always tweaks the text and makes improvements where necessary. It's reassuring that someone as brilliant as him is never satisfied with what he's done, though how he could improve on what he gave us last night I don't know. He also  had time for a brief Q&A session, during which he fielded some very bizarre questions.

Then it was out into the foyer for the book-signing. He had mentioned that he takes his time over these because people are just so darned interesting. He wasn't lying. He was very generous with his time. We were about twentieth in line, but we queued for an hour! It was worth it, though. He was so charming and asked us lots of questions about where we were from, what Kettering is like and so on. He was also very interested in Sam's fledgling beard and drew a sketch of a handgun in his book, for no apparent reason. Nice touch, though.
Posted by Julia Thorley at 15:17