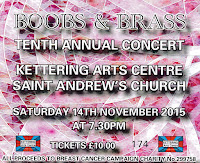 Every social group or society has its own rules of engagement, which can make it seem rather odd to the outsider. At a jazz concert, for instance, the audience is expected to clap after each solo, mid-song, and the performer will give a modest nod in acknowledgement.

I mention this because we had another extraordinary evening at Kettering Arts Centre yesterday at which we were introduced to brass band etiquette. We went to see Boobs & Brass, an all-female ensemble that was founded here in Kettering 10 years ago. It is a scratch band: that is to say, its members rehearse separately and only come together for performances. They have raised in the region of £175,000 for charity, predominantly for research into breast cancer.

Now, brass bands aren't really our thing. Apart from having watched the fabulous film Brassed Off many times, our only other brushes with the genre have been seeing The Unthanks with the Brighouse and Rastrick Brass Band, and catching the tail end of the Raunds Temperance Band's set at a local music festival. We only went last night because we wanted to support the Arts Centre (tickets hadn't been selling well) and because it was for a good cause. Actually, there was a decent-sized audience, but how many of these were related to the band members I wouldn't like to say.

Anyway, back to the etiquette. We began with the national anthem, which took us by surprise. Then through the evening we discovered it is apparently quite normal to have an exposition on each piece that is played. This meant that we saw quite a lot of the redoubtable compere, and interesting though it was, I'd rather have had a couple more tunes and read about the music in the programme.

There is, of course, much fun to be had with the name of the band. Its website says that some magazines have been unable to promote them because of the word 'Boobs'. We managed to come with some alternatives - and I'm sure you can think of more: Tits and Trombones is almost too easy; Menopause and Mouthpieces; Vaginas and Valves; Fannies and Flugelhorns;  Dames and Drums; Uteruses and Euphoniums; and one very rude one involving cornets.

It was a surprisingly entertaining evening. I can't help but wonder what Victoria Wood would have made of it.
Posted by Julia Thorley at 13:03