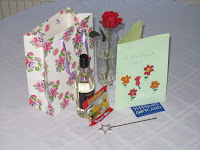 It was real privilege to be a judge at the Open Stage Performing Arts Company Performance Awards today, where I was one of a panel of three sitting in awe of the talent of children from under five years old to 16 and adults, too, dancing, singing and performing dramatic monologues. Rachael, the wonderful woman behind the company, is doing a Good Thing here and has created a place with such warmth and creativity that it would be a cold heart that wasn't moved - and yes, there was one singer who brought a lump to our throats with his fabulous performance.

In her opening remarks, Rachael said that one of the aims of the organisation is to create 'brave people who can be brave for the rest of the lives' and that Open Stage is a bubble of creativity that can spread out into the world. All I can say is that I came home inspired.

The photo shows a selection from my judge's goodie bag (there was also some chocolate, but it wasn't available when this picture was taken). I was particularly pleased with the wand! And the red rose? That came from Exotic Dining who served us a lovely meal last night and who always give the ladies a rose on their way out. Nice touch.