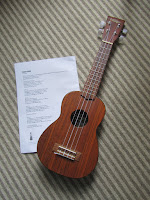 There have been mutterings in the ukulele ranks recently about the sort of music we should be playing. I'm not a fan of George Formby, but I don't mind playing the occasional down-up-down-up song as long as it's tempered with something modern. However, there are some in our group who steadfastly refuse to play anything written in the 21st century (I kid you not), so when 'House of Gold' by 21 Pilots was introduced to our set list they took umbrage. Some sit stony-faced and won't join in, and one man has actually left the group in protest! This notwithstanding that the song was written for the uke. Whatever: lots of potential story material, methinks.


***
On an entirely unrelated note, those of you who live, study or work in the West Midlands might like to have a go at Poetry On Loan's competition, where the prize for adults is a paid performance in a library. Details here. Good luck