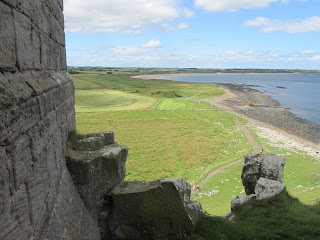 While number two son and his girlfriend and her extended family are lounging round the pool in Tenerife, and hundreds of strangers endure horrific delays at Britain's airport, Mr Thorley and I have returned, smug faced, from a glorious week in - well, if I tell you, do you promise to keep it a secret? I don't really want anyone else to know how peaceful and spacious and crowd free it is in - Northumberland. Pictured is the view from Dunstanburgh Castle: can there be a finer one anywhere?

I could wax lyrical about our adventures, but other people's holiday memories, like their dreams, aren't really that interesting. Indulge me, though, as I share a few snippets that made us smile and ponder while we were away:


Back to the grindstone tomorrow.