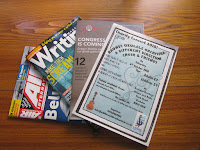 My mood is much improved this week, thanks in no small part to some major-league pruning and tidying in the garden. Basically, we've been editing the long border that runs from the pond to the shed and it looks much better. There's nothing like a physical labour in the sun to raise the spirits.

Work is picking up, too. Today I've edited an article about Russian military aircraft, finished a piece on a tourist destination in Staffordshire, taught a yoga class and noticed that I get a mention in Writing Magazine as judge of the H E Bates short story competition. Have you started on your entry yet? You have until 3 December to get your entries in. I'm in the current issue of Spectrum, too (the magazine for members of the British Wheel of Yoga).

Elsewhere, nerves are building ahead of the charity concert on Saturday, raising money for Cransley Hospice and Headway East Northants. My nails are filed short, my ukulele is tuned and I'm ready to rock!
Posted by Julia Thorley at 14:28