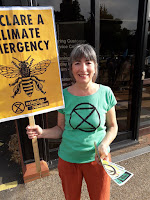 Since I last posted on this blog, I've spent a lot of time in what might be broadly described as community ventures. Two are particularly worthy of note.

We've had this year's KettFest weekend, the annual promotion of local arts and culture. I facilitated a gathering of local authors in the library, which was great fun. People met to talk about their own writing projects, to network with people who are already published and to find out information about the next steps in their own writing 'journey'. There was much chat and joy.

Then I hightailed it round the corner to take part in a spoken word event: again, much joy. I read a couple of poems, a prose piece and an extract from A Sparge Bag on the Washing Line (coming soon!).

One of the stalls at KettFest was Extinction Rebellion. A group has been set up in Kettering, which Mr T and I have joined, and on Wednesday we all stood outside the borough council offices with flags and banners, because Item 11 on the agenda was the proposal that a climate emergency be declared here. It was a good-natured action - we offered strawberries to all the councillors as they arrived - and no one glued themselves to anything. Then we trouped into the council chamber for the meeting. Sensibly, the motion was passed unanimously. I'm sure you don't need me to tell you how important this is.

Both of these episodes made me realise that there is a lot of good energy in the town, if only you look for it. OK, there's plenty that needs fixing, but it would be nice if we could build on the positive instead of always focusing on the negative: a bit more ' Yay, Kettering!' and a bit less 'Kettering's a dump'.

Excuse me, now, while I go and put my soapbox away.
Posted by Julia Thorley at 11:03