Definitely not another fine mess 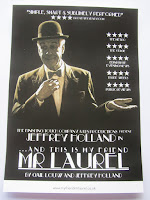 If you live in or near Musselburgh, Croydon, Stroud, Maidenhead, Porlock, Guildford, Banbury, Thame, London, Leeds or Richmond, may I suggest you check out the touring one-man show by Jeffrey Holland that is coming your way? He was at Kettering Arts Centre on Saturday night with: '...And this is my friend Mr Laurel', a one-act play by him and Gail Louw. The publicity leaflet tells you what you need to know:

'Set in the bedroom of a sick Oliver Hardy, the show takes place during Laurel's visit to the dying man. Recounting their past success as the comedy double act Laurel and Hardy, this is a humorous and touching look at one of the great cinematic partnerships of the last century.'

You don't need to know much about the lives of Laurel and Hardy or to be a fan of their work to enjoy this play. In the second half of the show on Saturday, Jeffrey Holland (as himself) told us anecdotes and answered questions from the audience. He was generous in his praise of his co-writer and said that her excellent ear for dialogue is one of the reasons for the success of the play. (He took it to Edinburgh in 2012 and again this year.) For aspiring writers like me, it was a real lesson in how it should be done. Pop along if you get the chance. details are here.

On other matters, my post on Friday has raised several enquiries as to what a gong bath is. All is explained on my other blog: Yoga? Here's what I'm thinking.
Posted by Julia Thorley at 14:21