Why 'Jekyll and Hyde' was a real horror 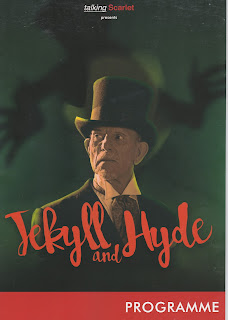 Over the weekend, we went to the theatre - the Core at Corby Cube - to see a performance of Jekyll and Hyde. This is a touring production by talking Scarlet; if you live in Tunbridge Wells, Dundee or Lowestoft, it's coming your way and it's worth a look.

We sat with a couple of friends, one of whom is a science teacher in what is generally accepted to be one of the better senior schools in the county. He told us that the original  RL Stevenson book on which this play is based is a set text for many students this time around, so he had pointed out this production to his English-teacher colleague, in case she or any of her classes were interested in going to see it.

Her response was: 'Oh no, they've already done the essay on that.'

I've already had a bit of a rant on Face Book about the audience, but I'm still annoyed at the behaviour of some members. I know I'm pushing at an open door here, but honestly! When they weren't rustling their sweet wrappers, they were unscrewing (phsst) and then drinking from (slurp) their coke bottles, with obvious relish (burp); or they were fidgeting and sighing; or talking. At one crucial point (spoiler alert) the woman behind me said "Oo-er! It's the same handwriting!"

I know theatres are strapped for cash and that selling drinks and nibbles is just a way to boost their income - but Pringles? Really? Come on!

Maybe it's not their fault. I mean, if you're used to watching stuff on a 54in screen in your living room, perhaps it's easy to forget that what you're seeing on stage is, you know, live: that these are real people who've worked hard to learn their lines and are trying to put on a show. There's no pause button, no opportunity to rewind if you didn't catch what was said because the idiot next to you was KEEPING UP A RUNNING COMMENTARY!

Or maybe it's just ignorance. Maybe it's the way they were brought up and they just don't know how to behave. We are reminded to turn off our phones in cinemas. May I suggest that we also remind theatre audiences to do the same and while they're at it to refrain from noisy eating and drinking or chattering?

It shouldn't be necessary, but it clearly is.
Posted by Julia Thorley at 13:12