Who dunnit - and who shouldn't have? 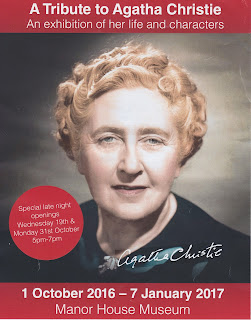 As I mentioned in Friday's post, I spent the weekend at the Malcolm Arnold Festival in Northampton. It was, shall we say, a bit of a curate's egg; some of the music was wonderful, some of it not so wonderful. Arnold had various troubles in his life that are reflected in his works and I think some of the pieces we heard might have been written when he was having a bad day. However, it probably says more about me than him that I find that solo brass performances sound as though the player is running through his rudiments, rather than trying to entertain the audience.

One of the talks we sat through was equally challenging. It should have been fascinating - the role of the CIA in controlling the music scene - but it was just baffling. I'm not an idiot (quiet at the back!), but I found it rather demoralising to keep being told 'Of course, you all know that...' when I didn't!

I went to another less than satisfying talk last night, this time on the topic of Agatha Christie. There is an excellent exhibition in our town museum about this writer, and the woman behind the collection was at the art gallery to give us a talk. Trouble was that while she was undoubtedly a fan and clearly has a lot of memorabilia, a public speaker she was not. Now, as regular readers will know, I'm no public speaker either - but then I don't pretend to be.

I've edited enough books by subject experts to be able to say that knowing all there is to know about something doesn't mean you can write about it or, it seems, speak about it. Am I being harsh? Perhaps. I'm sorry: I have a cold.
Posted by Julia Thorley at 08:04