As luck would have it, we caught a break with the lovely weather at the weekend when we took a combined birthday/wedding anniversary jaunt to Llandudno. You can keep Lanzarote: give me a bit of British seaside any time. We walked and mooched, and laughed and ate, and generally had a splendid time. If you've never been, don't be put off by its reputation for being an old folks' resort. It's absolutely beautiful.

One of the many hilarious moments came when we were strolling along the pier, ice-creams in hand. As soon as we stepped out of the shelter of the awnings, poor Clive had his cornet whipped from his grasp by an enthusiastic gull - possibly one of those in the photo above, which we took a short while later.

There were moments of literary reference, too. The excellent Snooze restaurant had Dylan Thomas quotes here and there on the walls. Clive was delighted to see from the menu that my Arancini rice dish included Panko breadcrumbs, which are produced in the bakery where he works. Small world - a point emphasised by the fact that he was in an Italian restaurant in Wales eating a Polish pork dish.

Back to the literature. I didn't know this, but apparently Llandudno was a favourite holiday destination for Alice Liddell, the real-life Alice from Lewis Carroll's stories, and to this end there is a Wonderland trail through the town (see above). The town's website says that the Walrus and the Carpenter are the names of two big rocks off the West Shore. And as if that wasn't enough, there is also a plaque as part of the North Wales Film and Television Trail (who knew!) commemorating the fact that The Forsyte Saga was filmed in the town. 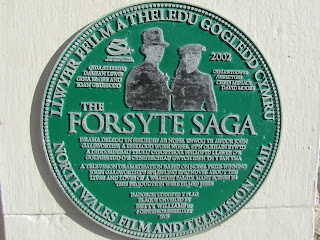 I wrote lots of notes for use in future writings. Do think this means I can claim this as a business trip?