How honest evaluation can lead to success 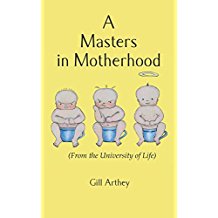 Following my recent blogpost about the value of feedback, author Gill Arthey shares the story of how her first book came to be published - and how it nearly didn't happen. Gill and I would both value your comments, if you have a moment.

"I had reached that magic age, 50, which for some reason seemed to be a very significant milestone for me. My four children had all but left home, give or take a few weeks here and there when the need arose, so life for me had changed significantly. Twenty-five years of mothering four boys had been all consuming and looking after their animals, mainly horses, had taken up pretty much all of my time. With the boys gone and the horses reduced, I suddenly had time to spare – but what could I do with it? For some reason I had a really strong urge to create something I could be proud of. After musings about making bespoke dog beds, trendy horse rugs and posh perches for chickens (all of which required skills I didn't have), I decided to have a go at something I had always loved doing: writing.

"My first fumbled attempts were some pretty dreadful children's stories, using some of the characters my husband had invented at story time. Well, J K Rowling had done it, so why not me? I failed miserably! Then a close friend suggested I write about my first three babies, who were a set of natural triplets – not something everyone can write about. (Their baby brother arrived three years later.)

"Once the book was finished, an author friend advised me to use a literary consultancy for an honest evaluation. The report arrived four weeks later and I have to say it wasn't quite what I wanted to read: my punctuation was poor – no surprise there, as I had been moved to many different schools, even living in Africa for a time, so my education was sadly lacking; at no point did I make it clear how old the boys; nowhere was there a description of how they looked. My spirits fell, until I read the very last page: ‘However, having said all of this, I really love your style of writing and your sense of humour. You have some lovely stories to tell and I really think if you can face the challenge of rewriting it, and addressing the punctuation issues with a good editor, this book will lend itself to an autobiographical novel written a la James Herriot style, with your words painting the picture.'

"At that point I thought probably not. But later, walking past the British Heart Foundation shop I saw a tome balanced at the pinnacle of a book display: The Works of James Herriot. Could this be a sign? Of course I had to buy it, and after reading the first chapter I started to see how it could be done. A year and 300 more pages later, my novel was ready for the publisher."

A Masters in Motherhood is available from Amazon here.
Posted by Julia Thorley at 14:35