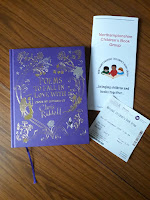 Adding further weight to the argument that Corby is the go-to place around here for unexpected arts events, I was at the town's theatre last night, The Core at Corby Cube, for an event organised by the Northamptonshire Children's Book Group, a branch of the Federation of Children's Book Groups*.

Author and illustrator Chris Riddell, former Children's Laureate, was in town promoting his new anthology, Poems to Fall in Love With. He was already in situ as the audience rolled in, sitting behind a desk sketching, with the images being presented on to a screen. Also on stage were our readers for the evening: local actors Will and Sue, and Elaine, a student from one of the town's senior schools.

It was an interesting format. Chris chatted amiably about the poems and then as one of the readers stepped forward he sketched an appropriate illustration, live, right there, before your very eyes, replicating the fabulous images that accompany the poems in the book. Several lucky people went home with one of the pictures.

The book is beautiful inside and out, with a cover that just makes you want to stroke it and a broad selection of poems ranging from Kate Tempest to Sylvia Plath, Leonard Cohen to William Blake, and all points in between.

It was a great evening and Chris was generous with his time as we queued up to get our copies of his book signed. I know from speaking to the organiser that he'd had a pretty full-on day, but you wouldn't have known it from the way he engaged particularly with the youngsters, posing for selfies and chatting as though he had all the time in the world. What a nice man.

* Check out this organisation if you have any interest at all in children's literature - and who doesn't?
Posted by Julia Thorley at 09:13