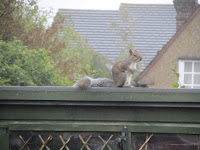 I am supposed to be editing today, but I'm grumpy and can't settle, not least because I'm chasing payment of an invoice for a raft of yoga classes that began on 3 July. It's not acceptable and I'm banging my head against a brick wall. In an attempt to boost my mood I've been for a walk, but that hasn't helped. So, I'm writing a blog instead. I should probably have tried this first. Here goes.

We have a beautiful hazel tree in our garden that this year has yielded a particularly spectacular harvest. We like hazelnuts, but not, apparently, as much as the squirrels, who have been quicker off the mark than we have in their picking. Now, I like a squirrel as much as the next woman, but they've gone too far. 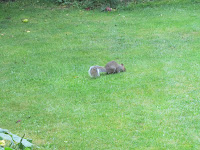 Usually they skitter about in pairs, but I've had regular visits from a Gang of Four who, not content with stripping the tree, have also been fighting amongst themselves. If you think squirrels are cute, I assure you you'd change your mind if you had one snarling at you from the conservatory roof. And the noise! 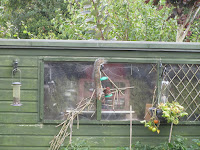 I would be quite  happy to share the produce with them, but they haven't left us any at all. They eaten quite a few, judging by the debris on the patio, but they've also buried dozens in my lawn. I fully expect that we shall have our own burgeoning woodland this time next year. They've been at the peanut feeder, too, and during their acrobatics have annihilated the trellis over the shed window.

What's the solution? I don't want to cut down the tree, but this can't go on. One friend has suggested we cut off the nuts. Whether he means from the tree or from the squirrels isn't clear.