Is this what democracy looks this? 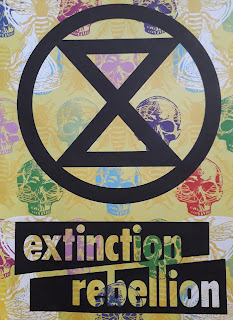 I sat in tears last night watching a live stream on Facebook from Trafalgar Square. Whatever your views on the climate emergency and the actions of Extinction Rebellion, these scenes were horrific. Pictures of the police moving in to evict a lawful assembly, under cover of darkness, throwing away people's personal belongings and all this with only half an hour's notice made my blood run cold.

I was in London over the weekend. Despite the passion of the XR protest, it has been a peaceful event in line with the organisation's pledge to take part only in non-violent direct action. Last night, there was no shouting or screaming. Even while they were being moved on, rebels were working round the square cleaning up rubbish.

This morning I am sad, but I am also proud to have played a very small part in the action. I am not brave enough to stand and be arrested, but I'm grateful to those who are.

Love and rage.
Posted by Julia Thorley at 07:56