For no reason other than that we'd never been, Mr T and I have just spent a couple of days in Worcester. It's less than two hours away, but it was far enough from home to give us the chance to explore somewhere new and recharge our batteries.

Any town or city with a river always offers the opportunity for lovely walks, and Worcester is now exception. There is a huge project going on to rewild part of the Severn that should bring back flora and fauna, fish and fowl, which can only be a good thing. There were lots of people about enjoying the autumn sunshine. 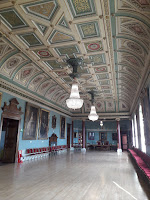 The centre is very pleasant. Despite the inevitable proliferation of chain shops, there is still a lot of lovely architecture to admire and on the day we were there a fabulous market was in full swing. There was also a craft fair in the Guildhall, where I won a bright yellow brolly on a charity tombola. The real reason to go in, though, was that from the street we could see some fantastic chandeliers through an upstairs window. They did not disappoint up close. 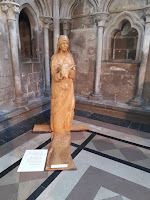 Of course, we had to go to the cathedral; it would be rude not to. Not wishing to offend the good people of Worcester, but while it was a fine  example it was nothing special. There was, though, an array of wooden carvings of 20th-century icons. The one of Mother Theresa had the accompanying text:

'Let us touch the dying, the poor, the lonely and the unwanted according to the graces we have received and let us not be ashamed or slow to do the humble work.' 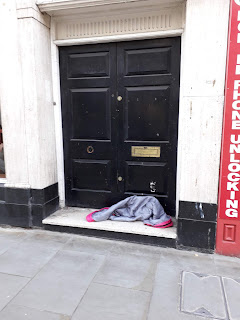 Sad, then, that my overriding impression of Worcester was that there is a huge number of rough sleepers curled up in doorways.

Our trip finished, somewhat inevitably, with a visit to a National Trust property: The Firs, which is a museum in honour of Edward Elgar. It's a lovely cottage, but very small, and it's the place he lived for only the first two years of his life. The chap on the door told us that Elgar was very fond of the place, however, and wanted it to be the house where he should be remembered, should such a thing be thought appropriate.

In the little garden, there is a bronze of the man himself, sitting on a bench and looking out to the Malvern Hills. I sat with him for a while and enjoyed the view. 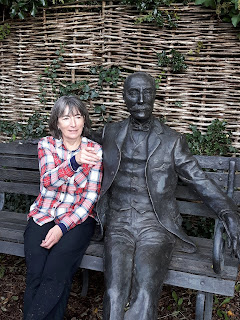