When my husband does the supermarket shop on his own, two things generally result: it costs more than when I do it, but we get nicer food. On his last trip, however, he came back without his habitual weekend pork pie treat, declaring that all those on the shelves were - well, I can't tell you what he said, but it wasn't very complimentary.

What he did bring home, though, was the wherewithal to make his own. All those years in the bakery trade come in useful in such crisis times. I was banished from the kitchen, while he put on his pinny and wielded his rolling-pin. 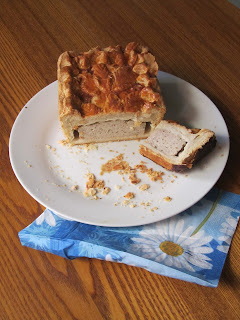 Ninety minutes later he revealed a pie of such beauty and majesty that it brought a tear to my eye! It wasn't one of those picnic-size morsels; no, this was a full-on 2lb example, with a hand-crimped crust decorated with pastry leaves.

Unfortunately I got distracted and by the time I went back with my camera the teenage hordes had been at. Even so, I think you can see from this picture that it really was a prince of pies. I have decided he can stay for at least another week.
Posted by Julia Thorley at 10:49