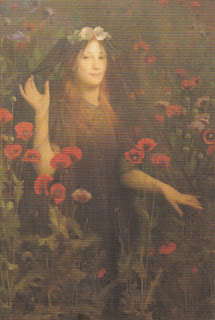 I've just spent rather too long following a trail started by a visit to the Alfred East Art Gallery in Kettering last weekend.

I had an old schoolfriend staying with me and I set about showing her the sights, which naturally included a trip to said gallery. There was an exhibition of the works of Thomas Cooper Gotch - Gotch is a big name locally - who was born in Kettering on 10 December 1854. He spent many years travelling and working abroad, but he and his wife Caroline Burland Yates, herself an art student, and his daughter were active members of the Newlyn colony in Cornwall. His first paintings were of natural, pastoral settings, but he went on to immerse himself in the romantic style of the Pre-Raphaelites, for which he is best known. His works have been exhibited at the Royal Academy, the Royal College of Art, the Paris Salon - and Kettering. He died in 1931.

Anyway, we were drawn to the work 'Death the Bride', which is part of the Alfred East collection. It is oil on canvas and is about 5ft x 4ft. There was only one other person in the gallery and he, too, was entranced by this picture. I bought a postcard from the gift shop and resolved to find out more. The title of the  painting comes from Shakespeare (naturally). It is from Measure for Measure, Act III, scene I, line 86, where Claudio says:


'If I must die, I will encounter darkness as a bride and hug it in my arms.'

Floral symbolism abounds in Pre-Raphaelite paintings, and poppies were used to represent the notion of death or eternal sleep. Gotch uses poppies here to show death personified as a beautiful, morbid bride ready to embrace the viewer for eternity. I wonder why the poppies in her hair are white: a symbol of purity, perhaps?

So that's how to turn an idle afternoon out into a research exercise!
Posted by Julia Thorley at 17:14