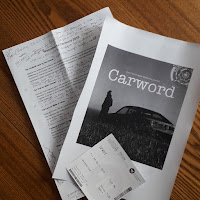 It was a real privilege to be in the audience last night for Carword, a presentation by Core Playwrights Ensemble.

The (mostly) amateur dramatists have been meeting for the last few months to write 10-minute one-act plays, which were performed last night in Corby's theatre by four professional actors, each playing multiple roles. I've never seen drama done like this before, but it worked really well, a bit like live-action flash fiction.

Afterwards there was a Q&A session with the writers, actors and directors, during which I wrote copious notes all over my programme (which intrigued the woman sitting next to me, who kept leaning in to see what I was up to). Here are some of the key points:
There are actually nine people in the group, but only five plays were chosen for performance. However, the other four stayed involved in the process, working with those selected and supporting them with encouragement and constructive feedback. I love the generosity of that.

I came home inspired. Congratulations to everyone involved.