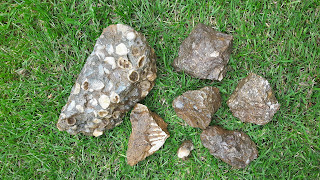 Project 'Walk the Jurassic Way' is closer to completion, thanks to a weekend stomping around the Northamptonshire/
Oxfordshire border. It's not far from home, I know, but we decided to stay overnight, so we could do some of the footpath on the way down and some on the way back. We booked a room at the Brasenose Arms in Cropredy, which was, shall we say, adequate. No, it was fine, really, but I'm glad we hadn't booked in for a week.

The weather was perfect - dry and warm, but not hot - and we ticked off several villages and points of interest on our itinerary. One place we called in for a packet of crisps and a half of something cooling was Braunston, where we sat outside the  Admiral Nelson pub, right on the towpath of the Grand Union Canal, watching in awe as participants of a Birmingham to London race jogged past. Rather them than us, we thought.

The footpath, which connects Stamford to Banbury, is called the Jurassic Way because of the geology beneath it. If you plan to do this walk in the company of a geosciences degree-holder, as I did, be prepared for lots of stops to look at fossils that are just lying around. The samples in the picture were picked up in a field. Aren't they lovely?

We've only got about 8 miles left to do. Then what? I quite fancy the Limestone Way, which runs from Castleton in Derbyshire to Rocester in Staffordshire, finishing about 5 miles from where I was brought up in Uttoxeter. Let me know if you've walked this route.
Posted by Julia Thorley at 15:27